Some things, like good brews, take their time. It had taken me two missed seasons to act on my curiosity about the annual turtle “festival". Last week, my friend and I drove around 230km south from Mumbai to Velas, a tiny village along the Konkan coast.

It’s the middle of the February-April hatching season, and visitors are welcome to watch the spectacle of Olive Ridley turtles hatching and tottering to the sea. Large stretches of India’s coastline are home to the turtle; the Velas beach is perhaps the most popular nesting site on the Konkan coast.

Don’t think, however, that you will invariably be able to glimpse the turtles if you happen to visit during the festival. The weekend before we went, not even one egg had hatched, we were told.

Once abundant, the Olive Ridley turtle now falls under the “vulnerable" category in the list of the International Union for Conservation of Nature. While nature can be harsh, humans have emerged as one of the main threats owing to unfriendly fishing practices, development and encroachment of nesting beaches, and poaching of turtle eggs, meat and skin. The Sahyadri Nisarga Mitra (SNM), a non-profit, and a network of locals united under the Kasav Mitra Mandal have been working to protect the turtle nesting sites along the Konkan coast. 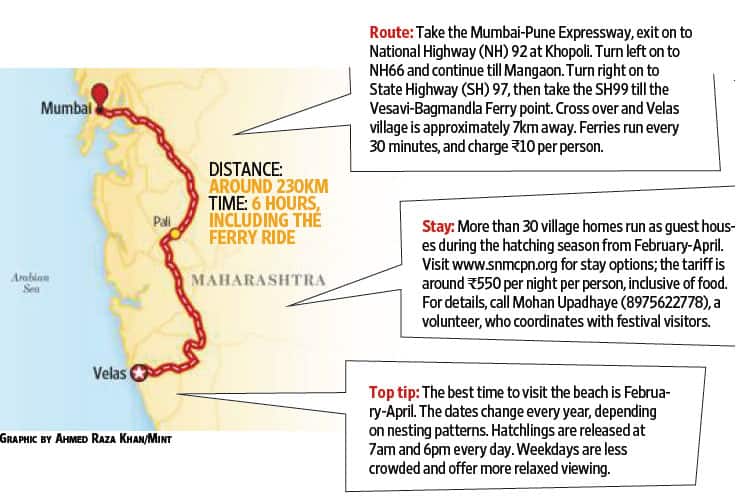 We left for the 1km-long beach at 6am, an hour before the scheduled release of the turtles. It’s a short distance from the village. The walk took us through dimly lit, cobbled lanes, across a tarred road, and on to a muddy path with paddy fields on one side. Past this stood a grove of casuarina trees, like a platoon of soldiers guarding the beach.

My friend and I began helping the volunteers to set up bollards to keep spectators out of the release zone. A patch free of footprints was chosen, for the hatchlings struggle in depressions. By 7am, the beach had started filling up with people.

Within the cordoned area, a lone cane basket lay covered with a burlap. A volunteer lifted the burlap, took out seven hatchlings, one by one, and placed them on the sand. Off they went to the sea, paddling as fast as their tiny flippers could take them. Each was the size of our palms. Usain Bolt, as one was promptly nicknamed, left the others behind. Two seemed lost and headed towards the spectators, who were clicking pictures furiously, before turning to the sea again.

The cheering got louder as one of the hatchlings overtook Usain Bolt. It stopped just before the water, and the crowd became quiet, waiting. The hatchling lurched forward, but was pushed back by a wave. A collective sigh escaped. The hatchling edged on, moving slowly through the cloggy sand, till another wave carried it into the water, to its home. The crowd clapped, happy. In those 20 minutes, we had felt we were part of that tiny turtle’s journey.

In the excitement, a large crab scuttled unnoticed into the release zone, rushing towards the hatchlings. Fortunately, a volunteer noticed the intruder, picked it up and released it some distance away—but not before suffering a couple of nips to the hand.

There are always multiple predators—jackals, foxes and dogs—waiting to prey on the turtle eggs. Crabs and birds may attack as the hatchlings trek to the water. The turtles aren’t safe even in the waters, for fish lie in wait, and sea birds can swoop when the turtles rise to the surface to breathe. Even if one in every 1,000 turtles makes it to adulthood, its chances of survival are dismal.

The good news is that the villagers, who were once the biggest predators, have now become self-appointed guardians. Every evening, the SNM organizes a documentary screening in the courtyard of a village home, showcasing the conservation work in the region.

By the time the sun was up, even the slowest hatchling had reached the waves. The flippers that seemed awkward on land would, hopefully, be strong in water and steer the tiny turtles away from danger.

As one more release session came to an end, the volunteers collected the red conical bollards and stacked them. I stood there, thinking about those seven hatchlings, braving the ocean on their own. One day perhaps, many years from now, one of them will return to nest on these very shores.