"storyDirectUrl"
OPEN APP
Home / Mint-lounge / Treadmill | Get out, and cheer

Treadmill | Get out, and cheer

Treadmill | Get out, and cheer

My father had only one question after I finished my first ever marathon, in Chicago. “Congratulations. But how did you manage to complete that 42.2km run?" he asked me. “It was mostly because of the crowd, dad," I told him.

If you ever get a chance to be a part of the Chicago marathon, you would know what I meant. Over a million people, cheering for 35,000 runners. And that crowd really knows how to egg the participants on. It is really an energizing atmosphere. The temperature is chilly at 5-10 degrees Celsius, with a constant wind whipping up a storm, especially when it comes in through the wind tunnels off Lake Michigan. And that is what makes the lusty cheering even more amazing. I have seen babies braving the chill, cheering with their parents lustily every time an unknown runner passes them by. 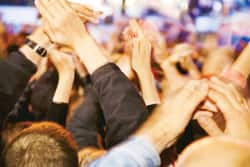 The runners in Chicago have different things written on their T-shirts, sometimes even on their foreheads, sport temporary tattoos on their arms, and carry placards on their backs. And they do all this to cheer fellow runners on and help them meet their goals.

Contrast this with runners taking part in marathons, or even in parks, here in India. All of them look so serious as if they are carrying the burden of the world on their shoulders. A namaste or a good morning or salaam, etc. to strangers invariably goes unreciprocated. And by the time you cross a runner for the third time in a park, the least you can expect is a smile. Sometimes, even that seems to be asking for too much.

Remember, if we lighten up a bit and have a cheerful expression (if nothing else), it encourages others to greet us. It works the same way even in our workplaces. Sadly, it has reached a Dilbertian level where people rush around corporate towers and corridors looking busy, their brows furrowed. Maybe all this is to show their commitment to work or their importance in the scheme of things, and how important they are, so they do not notice any of the others along the way.

Appraisals time in India is again not so much about encouragement, but about stating what did not go right during the year. A career is like a marathon: there will be some ups and downs throughout and you cannot fire at 100% always. The critical thing is that both the runner and the audience need to cheer, and the runners need to cheer each other on too, encouraging them especially once they hit the wall—the tough stretch between the 32nd and 42nd km.

Then the roar of the crowds and every living soul as the runners approach the last 1-2km, especially as several of the mid-pack runners are flagging: That’s what gets them to surge and some of them actually smile. That’s what we need to see in the last month of a year at companies where there is encouragement, even if the chips are down, because that is when, sometimes, boys become men, and miracles happen. Let’s get some more cheering out there.

Look at some statistics

• Mumbai Marathon and associated runs: 33,000 runners and not more than 20,000 spectators on the roads

This is where Asia has a lot to learn, because cheering works miracles, and shows a community spirit, even if only for a day. Then many such community experiences build community bonds over time.

We had a small fun run in Gurgaon recently and when we met our volunteers, I told them their various specific roles. But one thing common for each group was: cheer like hell because you need to set the benchmark for cheering in India, We Indians take ourselves too seriously and do not know how to encourage others, especially strangers. And smile, always. I was pleased with the emails enthusiastic participants flooded us with after the event. They will be back for more. I know all of them will.

So, whether you are running, or in your office, or discussing your kid’s marks or career options, don’t forget that most important thing. Always cheer yourself and others around you. And if you go to a running event and cannot or are not running for whatever reason, get there to cheer because you can make a huge difference. You can actually be a change agent in this country by cheering and getting others to follow suit.

Rahul S. Verghese is a management consultant and founder of Runningandliving,com. Write to us at treadmill@livemint.com