Palash Bedi, drummer and co-owner of Overdrive Studios in Lajpat Nagar, sums up the central advantage of a jam pad in a wonderfully concise line of Delhi English: “Apna (our) scene is all soundproofed, dude," he says when asked how he deals with harried neighbours complaining about the noise. 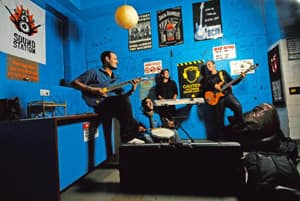 Two of Delhi’s biggest jam pads, the MGMH (Music Gets Me High) Sound Station in Okhla and the Fender Music Academy in Shahpur Jat, opened a little over a year ago and other, smaller jam pads such as the aforementioned Overdrive Studios sprouted all over south Delhi last year. “South Delhi is the centre of the city’s music community," says Oorja Singh, co-founder of the SOS Jam Pad in South Extension. “It’s well-connected enough for people from all over the Capital to come." SOS started operations in October, and is already in the process of expanding its stock of equipment.

The end of January is when the “second wave" of the music season starts, sandwiched between college semester exams, and jam pads see packed calendars and a healthy roster of musicians frequenting their joints. “It really picks up after August, and goes on till about April," says Manu Saxena, owner of Fender Music Academy. “A lot of college festivals and ‘battle of the bands’ competitions happen around this time." On Sound Station’s website, the roster for January shows a white-spaced lull towards the end of the month, with the calendar restarting with a flurry of bookings around 30 January.

“We’re not expensive, we give discounts to bands wanting to jam at a stretch, we’re open till late and we’re situated in an area where you’re not kicked out after 8pm," says Ritnika Nayan, founder of MGMH, the artiste management firm that runs the Sound Station jam pad in Okhla. The jam room is a spacious 22x13ft, and is filled with high-quality instruments. For bands on a budget, or college students stuck in cramped accommodation, the pads provide the luxury of good equipment without the need to carry it across town.

Most jam pads charge about Rs200 an hour, with free hours given away if you jam for more than 60 hours a month.

“We get every single kind of band at a jam pad," says Overdrive Studios’ Bedi. “From metal to groups playing Bollywood covers." Bedi’s played for many local bands, and making the jump to starting a studio and rehearsal space made sense for him. “We checked out all the other jam pads, but they all had flaws," he says. Some were too cramped for bands with more than four members. Others had tinny sound systems. “We focus on getting great sound, and good tone—not just loud wattage," he says. Attached to the jam room is a fully functional studio, and Bedi offers classes in Western music. This combination keeps the jam pad business model sustainable. Setting one up, says Nayan, can cost anywhere from Rs2-5 lakh, depending on sponsorship deals and choice of equipment. Bedi says even an off-season month brings in about Rs40,000 in revenue, enough to cover costs.

Part of the reason is that jam pads continue to be a south Delhi monopoly, and bands dispersed all over the city and 100 colleges have to make the long trek southwards. “We get people from really faraway places like Rohini and Ghaziabad," Bedi says.

But for bands, places such as these are vital. Many, such as Hindi pop-rock group Faridkot, record their albums at these places, and the interactions with other musicians who float in and out helps refine a rookie band’s sound. “These places have great vibes," says Them Clones’ Dev. “The people who run them are industry insiders who do it out of passion, and not mere ‘paise kamaanewale’ (money makers)."

They also solve iffy issues of space and set-up. When you have a band with eight members, such as fusion group Advaita, sporting, among other things, tablas, sarangis and keyboards, finding practice space can be a bit of a challenge. “When we started, there just wasn’t a place that could accommodate all of us," says Advaita guitarist Abhishek Mathur. The band, which has now been around for seven years, currently plays in a garage converted into a soundproofed jam pad in Chittaranjan Park.

“We need many more of these all over the city," Mathur says. “It really encourages the scene, and builds a nice foundation for bands to make use of. It’s like infrastructure development, you know?"

A list of five local jam pads for starters