Why are there few cold foods in Indian cuisine?

Why does a hot country like India have few cold foods? The answers lie in indigenous ingredients and inherited wisdom

It all began when I asked my mother what I could make for lunch. The temperature was hovering between 46-47 degrees Celsius in Gurgaon, near Delhi, and all I could come up with was curd rice. But I had made it for her just a day ago and, however eclectic her tastes may be, feeding a Bengali (and a gourmet cook in her time) curd rice two days in a row would not go down well. So then?

She looked at me matter-of-factly and said, “Make some moong dal with green mangoes." But this is not her vegetarian day (when masoor, the other commonly consumed dal, is taboo, since it’s considered non-vegetarian in Bengali cuisine). “Look up one of those books you bury your nose into all the time," she said. “Urad dal is cooling as well."

Cooling? That got me thinking. Regional cuisine is the offspring of geography and climate. India’s complex topography has, therefore, given rise to varied cuisines, with common threads among those that share weather conditions. The moong bean or dal, known as mudga in Sanskrit, has been the queen among summer foods in India for 5,000 years. From hot and humid eastern India to the dry and arid west and north-west, to the Deccan, the moong rules as a cooked meal—thin, runny dals, homely khichdis, light curries with vegetables or souring agents like fruits and berries—or simply as a cold food, something the West would call a salad.

For instance, kosumalli is a celebrated cold dish in Tamil Nadu: Moong dal is soaked in water till it swells and softens and then tossed with grated carrots or cucumber, lemon juice, salt, pepper and green chillies. Cut across to eastern India, where soaked moong beans are paired with moori or khoi (puffed or popped rice), sweetened with grated coconut and sugar and topped with sliced banana. Institutionalized as a ritual food, it is widely relished as a breakfast or snack in summer. Then there is the uppa hesaru in Karnataka, a roasted whole moong broth with tamarind, which is never served hot. Like all other legumes, the moong bean is packed with nutrients and is easy to digest. And its alkaline nature makes it the perfect cooling food.

Bengal, interestingly, has a little recognized tradition of cold foods. At the top of the pile is the kancha phalaahar (literally, uncooked fruit victuals), or phalaar. It comprises fruits, curd, cheerey (flattened rice) or murki (popped rice with jaggery and ginger) and mithai (a sweet made with besan or gram flour or moong dal, ghee and jaggery or sugar) and/or monda (different kinds of cooked sugar lumps such as batasha, kodma, nokuldana).

Eaten for breakfast, brunch, lunch or dinner, the concoction also goes by different, occasion-specific names: dodhikarma (when offered as puja prasad with the addition of honey and tulsi leaves), dhodimangal (a pre-dawn meal for the bride and groom on the wedding day, when they fast) and as kancha phalaahar.

Bihar has the one-stop sattu meal: roasted gram flour kneaded to a dough, mixed with chopped onions, green chillies and mustard oil and relished as a staple round the year, with some pickles on the side.

However, the concept of cooling foods in India is not so much about foods served cold as it is about foods with heating and cooling properties. Very cold foods and drinks, the ancient texts say, lower body temperatures and slow down the digestive mechanism. Moreover, as writer Sudha G. Tilak says, “Because of the high temperatures, raw foods are almost non-existent in Tamil Nadu—where I come from—as in other parts of our country. Cooking averts spoilage."

According to traditional wisdom, heat and cold are properties generated within the human body in response to certain kinds of food, irrespective of their temperature or spice content. Cooling foods include tomatoes, cucumber, pumpkin, gourds, greens, oranges, sweet limes, green mangoes, carrots, radishes, buttermilk, etc. And traditional Indian dishes in summer are generally made up of a combination of all these and more.

Chilled to the grain

A case in point is rice, described in Ayurveda as the perfect nourishing and healing food. While raw rice is said to induce heat, cooked rice is considered the first among foods, as Ratna Rajaiah writes in her delightful book on health foods, How The Banana Goes To Heaven—And Other Secrets Of Health From The Indian Kitchen: It is cooling, easily digestible, zero cholesterol, low in fat and sodium, a slow-digesting carbohydrate, rich in most of the B vitamins and minerals like iron, magnesium, potassium and zinc and completely free of allergens. Which explains the widespread consumption of kanji, fermented rice gruel, in summer: It’s drunk both hot and cold in southern India.

In Bengal, Assam and Odisha, panta or pakhala—cooked rice soaked overnight and eaten for breakfast or lunch with mustard oil, green chillies, raw onions and, perhaps, pickles—has been a staple for centuries. The fermented water is also highly prized, the slight alcohol content adding to the tanginess of it all. The ancient Ayurvedic text Sushruta Samhita prescribes fermented kanji or panta water mixed with a little salt as the best and most effective oral rehydration for diarrhoea.

A grain that’s right up there with rice on the goodness scale is ragi, or finger millet. Alkaline in nature, some varieties of ragi have twice as much protein as rice. Rich in minerals and vitamins, roasted and ground, ragi flour can be used as a filling one-dish meal with hot milk, grated coconut, jaggery, fruits and nuts.

However, the real filler on a hot day is the ragi malt described in Rajaiah’s book: “Ragi Malt, to the uninitiated, (is) a beverage made by adding a mixture of ragi flour and sugar to hot milk.... It is a nutrition-packed health drink. Firstly, of course, because it is made out of ragi. The second reason is in the word ‘malt’. Malting is a process by which cereals are made to sprout and then processed further. The sprouting activates enzymes in the grain which break down complex nutrients like carbohydrates and proteins to easily digestible forms and also produces other nutrients that did not even exist in the original grain—like Vitamin C." One large glass of ragi malt is as filling as two meals.

As the ragi malt indicates, not all of India’s summer foods are meant to eaten: Some have to be drunk. First among the desi smoothies is the sattu sherbet, a filling, nutritious energy drink. Sattu is mixed with cold water or buttermilk, and flavoured with chopped onions, mint or a twist of lime. The sherbet is a meal in itself.

Kolkata-based Farah Malik, a social worker and educationist, talks about a 1,400-year-old energy drink that’s made regularly in their home. Called nabeez in Arabic, it requires sultanas or seedless dates (khajoor) to be soaked overnight and the water consumed—along with the sultanas or the dates—the next morning. High in alkaline properties and soluble fibre, it cools the body and cleanses the digestive system. Architect (and Mint Lounge blogger) Nandita Amin, born and brought up in Gujarat, corroborates this: “My mother used to make me drink the water and chew kali draksh (black raisins) as it is cooling." 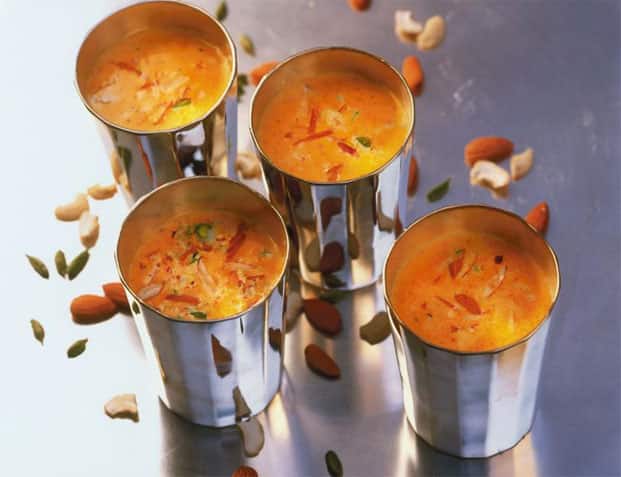 Amid the more regular cooling drinks such as barley water, sugar-cane juice, tender coconut water, watermelon juice and aam panna, khus sherbet, there is one that seems endangered—nannari (in Tamil), made with the root of anantmool, a medicinal plant. Known in other Indian languages as naruneendi, sugandhi, suguddimalo, anamtamula and anantamool, it’s ace at combating dehydration, summer fevers, dysentery and urinary tract infections.

Summer, obviously, is no reason to lose your cool.

The dish that sums up summer:

Sugar and salt, to taste

Heat the oil, fry the pumpkin till golden and keep aside. In the remaining oil, temper the cumin and fenugreek seeds and the chilli. Add the ash gourd, ginger paste, sugar and salt to taste. Let the vegetables cook in their own juices. When done, add the pumpkin, coconut and dried dill and mix well. If using fresh dill, add just a little bit and let it cook for a few minutes. Add green chillies, milk and ‘ghee’ and take off the fire.

If you don’t have dill, you can use 1 tsp roasted ‘paanch phoron’, powdered.