Dawn of a new age

Dawn of a new age

India’s victory over New Zealand at Nagpur came after two agonizing draws in the preceding Tests; just the fillip the team needed perhaps for the daunting tour of South Africa which follows. Yet, the more significant development in Indian cricket for me last week was Anil Kumble, Javagal Srinath, Venkatesh Prasad and Roger Binny sweeping the elections to occupy office in the Karnataka State Cricket Association. 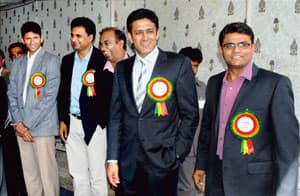 Change of guard: (from left) Prasad and Srinath, and Kumble (right). PTI photo

What’s new with former cricketers becoming administrators you might ask? In this case, I’ll concur to differ. Yes, there have been several players who have opted to become administrators in the past. Ajit Wadekar, Dilip Vengsarkar, Shivlal Yadav and Arshad Ayub are a few who come to mind immediately. Yet, the promise and value that Kumble, Srinath and Prasad hold out is formidable.

All four—and particularly Kumble—have had excellent credentials as cricketers and perhaps even more so as individuals of high integrity. They bring with them rich and varied expertise which could be crucial even at the state level as Indian cricket expands its horizons.

Srinath has been a match referee of some standing; Prasad has coached the Indian team; Binny has coached at various levels and done stints with the National Cricket Academy (NCA); Kumble has captained India and is also the current head of the NCA—apart from being one of cricket’s most influential voices.

It is rare that players of the same vintage from the same state come together with a common agenda (I’ll keep Binny out of the discussion from here because he’s been around for a while and therefore of a different milieu than the other three). Kumble, Srinath and Prasad are known to be friends, not just colleagues, but that doesn’t necessarily mean commonality of interest.

To throw up and thrash out issues, settle internecine differences and collate the thoughts and ideas agreeable to all requires a sense of purpose and motivation. It will be argued, and with justification, that these players closed ranks in a political alliance to throw out the previous administration. Be that as it may, this is a power bloc that merits attention.

What I find particularly important is the timing of their decision to jump into administration. Too often we have seen former sportspersons—and especially in cricket—getting into administration when they are fuddy-duddies with little to contribute. The prestige of high office seems to be the only allure for such people, not responsibility or accountability.

Kumble, Srinath and Prasad have chosen to be different. Most players of such high profile would rather be a commentator, columnist or selector. There are several options available nowadays to former players for glory and money. To have chosen grunt work over these inducements suggests a high level of passion and commitment—unless, of course, they are on a puerile power trip.

The moot question now: What’s the big deal about such players becoming administrators when Indian cricket is, all said and done, run efficiently? After all, the Board of Control for Cricket in India (BCCI) is the richest board in the world, and the Indian team is currently ranked No. 1. There has never been a better phase in Indian cricket history.

These are irrefutable facts, yet going ahead, Indian cricket (and by extension Indian sport) needs a New Age vision to compete and excel at the global level. The roots for this have to be sown at the domestic level. An environment has to be established which is less feudal, more pragmatic and certainly more accountable.

Administrators who are contemporaneous and whose mindset is not niggardly are better equipped than self-serving, petty-fogging, power-drunk persons (which may include former players) who now seem to inhabit almost every federation/association in Indian sports. A cultural shift in how sports is run in the country is something that everybody is rooting for, and any suggestion of that should be welcomed.

I must concede here that former players becoming administrators is not a guarantee of efficiency. In theory, somebody who has played a game should be more adept at running the game, but in real life, this is often disproved. The skill set required for administration is vastly different from that required for playing, and this often shows up dismayingly.

The Indian Premier League mess, despite the presence of three former Indian captains—Mansur Ali Khan Pataudi, Sunil Gavaskar and Ravi Shastri—in the previous governing council, is a classic case in point; the unceasing turmoil in Indian hockey, despite so many former players having tried their hand is another. Having won the elections, Kumble and Co. will be seized of the fact that the real challenge begins now.

The drudgery of administration, with its accompanying and constant power play, can put to test the most hardened resolve. How Kumble, Srinath and Prasad will fare will be shown up in time. They say they have a vision for Karnataka cricket, they will create the time to work for this and are willing to submit to complete accountability. I see no reason to argue with that.

Write to Ayaz at beyondboundaries@livemint.com