Do you really need sunscreen?

Do you really need sunscreen?

How many times have you reached out for that expensive bottle of sunscreen while shopping for cosmetics or medical supplies and wondered, do I really need it?

Perhaps many times, and even if you have often ended up buying it, your decision was likely bordering on the uncertain. Dump it: Continuous application of sunscreen lotion can harm the body’s natural ability to handle sunlight.

Every summer, cosmetics manufacturers publicize sunscreens in a way that makes you worry about any exposure to sunlight. On the other hand, health professionals want to lobby the government for a nationwide campaign to create awareness about vitamin D deficiency (all of India suffers alike). They suggest 30-40 minutes of exposure to sunlight every day for adequate vitamin D synthesis in the body (in combination with adequate calcium intake).

The truth lies somewhere in between.

“You need to apply sunscreen only if there is a medical indication (allergies or rashes); even there we try to suggest medicines rather than sunscreens," says C.R. Srinivas, head of dermatology at PSG Institute of Medical Sciences and Research, Peelamedi, Coimbatore.

One of the few photobiologists in the country, Srinivas has conducted sunscreen tests for many cosmetic and pharmaceutical companies but he still doesn’t often prescribe the use of sunscreen. The reason, he says, is that its continuous application can lead to development of resistance and harm the body’s natural ability to handle sunlight. “It then becomes a necessity."

But he agrees that many people, specially women, need it “for social or professional reasons. Those who are looking for a groom (given the Indian male’s obsession with fair skin) or those who are in the modelling business."

H.M. Chawla, a professor of chemistry at the Indian Institute of Technology (IIT), New Delhi, offers specific guidelines on when to apply sunscreen: “If you are going to be in direct sunlight for more than an hour and if you feel a burning sensation on your skin, you should protect yourself." Chawla has set up a firm called Sanmotech (short for Synthetic and Natural Molecular Technologies) at IIT, Delhi, which is looking to commercialize a new molecule discovered by him and his team. The molecule is currently being tested by many cosmetic and pharmaceutical companies.

Too much vs too little

Beauty industry practitioners say the incidence of sun-related damage to the skin in India has been increasing over the past few years—though there has been no study yet to substantiate if that is the case and, if so, why. There are two types of UV radiation—UV-A and UV-B. The former can cause more harm than the latter.“Sun-related allergies called PLE (polymorphous light eruptions), which are usually caused by UV-A radiation, are now more commonly seen. Too much sun, too often, on too little protected skin—it is a public health issue," says Raj Parikh, a dermatologist in Mumbai and a consultant to Vichy Laboratories, a division of the cosmetics company L’Oreal.But most sunscreens protect more against UV-B than UV-A. The sun protection factor, or SPF, that we find mentioned on the sunscreen packs refers to protection against UV-B. Srinivas says even those with a high SPF protect mostly against UV-B. He is now testing to see if a new drug called psolaren can, in combination with sunscreen, be effective against UV-A. Srinivas says that preliminary data suggests marginal protection. 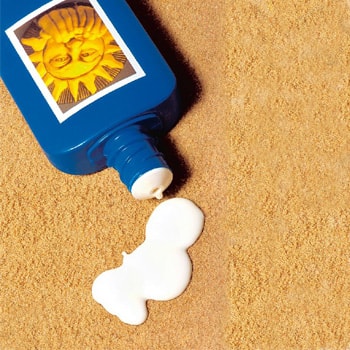 Meanwhile, Vichy Laboratories has conducted a study on 43,500 women across 21 countries. The findings state the obvious, but they are nonetheless interesting. At least 50% of the women say they get brown spots when they are out in the sun, especially Asian women (66%). Asian women are mainly concerned about the darkening effects of sunlight (83%). Their other concerns are premature skin ageing (39%), sunburn (32%) and acne breakout (31%). However, Vichy says it hasn’t studied the impact of sunscreens on Indian or Asian women.

Even at the scientific level, the sun-scare debate is hardly settled. According to scientists, the presence of nanoparticles in cosmetics, particularly sunscreens, could be damaging to the body as well as to the environment. One of the most widely used chemicals in sunscreens is titanium dioxide (at the nanoparticle level), overexposure to which can cause premature ageing of the skin and skin cancer. In March, a group of scientists from the University of Toledo at Ohio presented a study on this at the national meeting of the American Chemical Society.

“Some of these sun-care products, if not of good quality, can penetrate the skin, though ideally they should remain on the surface. In that case it is a health hazard," says Chawla, regretting that India has no regulatory body to oversee the medical aspect of cosmetic products.

While there is a need for economic and effective sunscreens for people who are exposed to long hours of direct sunlight, the irony is that these are not widely available. The expensive ones are targeted at people— the upper strata of society moving in air-conditioned automobiles—who don’t really need them, says Chawla.

Cheaper options to combat the sun are hats and umbrellas (the big ones are protective, not the small umbrellas that women usually carry).

So, it’s a choice people have to make. If there isn’t a medical need, no harm in having a skin that just looks well lived in.