Delhi to Kandaghat: An idyllic getaway to the hills

Hitting a pause on the rush and din of urban life

As the sun descended hurriedly, hiding behind the Shivalik range, the chill in the air became palpable. Hours earlier, I had disdainfully packed away my sweater in a handbag in the back of the car, overlooking the fact that the weather in the mountains can often be unpredictable. Thankfully, it took just another hour to reach Kandaghat.

Five long-time school-mates, who are now settled in various parts of the country and had been planning a reunion for a long time, had finally agreed upon a date. Finding the town—nestled comfortably close to major tourist attractions on all sides, yet blissfully isolated—on the map of Himachal Pradesh seemed to have done the trick.

We stretched our stiff limbs over a prolonged chai halt at a roadside stall and clicked a few photographs of silhouetted peaks—if there was ever a paradise, this must be it. Back in the car, we focused on the cocktail sky—amber, purple, orange and indigo played hide-and-seek with the tall coniferous forests and rocky cliffs. The rush and din of our urban lives fell behind.

On reaching the resort, we unpacked our warm clothes and settled down with an apple-cinnamon drink. We had our dinner on one of the terraces, a few yards away from a waterfall. A traditional sigri (coal-fed stove) and delicious Himachali dhaam (traditional meal) capped the evening.

Early next morning, we stepped out for a short trek before breakfast. The rocky trail seemed to be headed straight towards the skies. A local woman strode past us, climbing an invisible zigzag trail along the steep slope, knitting all the while. She smiled coyly as we stared at her, and pointed at a white fleck of a temple perched right on top of a hill. Overestimating our athletic capabilities, we tried to follow her, but she was soon out of sight. The white temple forgotten, we concentrated on the view.

Spread out before us were images straight out of glossy travel magazines. Wild valleys with cottony clouds, an azure sky, women shepherding cattle, and leftover stalks of dried crops after a harvest—it all made for a marvellous view.

Later, we explored the gardens of the resort. The hours till lunch went by quickly—laughing, paintballing, zip-lining, birdwatching.

After lunch, we drove 16km to the Mohan Shakti Heritage Park. A pet project of the late Padma Shri recipient, brigadier Kapil Mohan, who introduced the popular Old Monk rum brand, the park celebrates ancient scriptures and epics such as the Vedas, Ramayan and Mahabharat. The park is home to a grand temple, and the area, spread over 40 acres, is dotted with statues of mythological figures.

On the second day, we set off for Shimla, an hour’s drive away. It was drizzling lightly, but there were museums to visit, pictures to take and shopping to do. We sat on the benches along Mall Road, beyond Scandal Point, overlooking the seven sisters—the seven peaks that embrace Shimla—giggling and gossiping.

In the evening, we walked around Kandaghat, with its stalls selling local spices and tea, a sweet shop, and garment stores. Walking back to the resort, my eyes went up to the tiny white fleck on the hill. I vowed to return once I was fitter enough to conquer it. 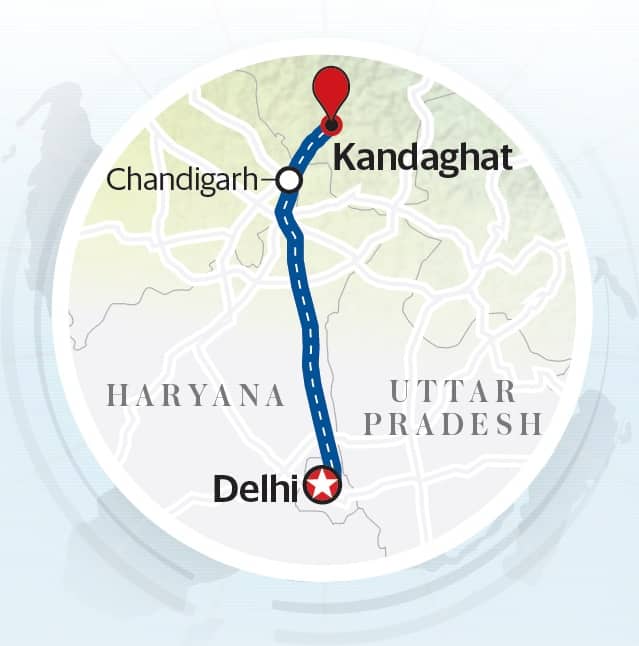 Route: Take National Highway 44 via Karnal till Ambala. Take NH 152 towards Panchkula and then follow NH 5 till Kandaghat.

Top tip: Take a detour to the oak and pine forests of Chail (24km). The Chail Wildlife Sanctuary is home to barking deer, ‘gorals’ (goat-like animals) and pheasants.

Weekend Vacations offers suggestions on getaways that allow for short breaks from metros. The author tweets from: @Swati_Sanyal_T.