Shehan Karunatilaka’s biography explains that he “spent the last three years interviewing drunks and watching Sri Lankan cricket matches". Out of these pleasurable activities came his novel Chinaman: The Legend of Pradeep Mathew, whose protagonists are, respectively, an alcoholic journalist and an obscure genius of spin bowling who may or may not be alive. Karunatilaka calls up a puzzling, enraging, largely masculine world of Sri Lankan cricket, and cricket journalism. Underpinning its boozy, soft-bellied voice is an often serious look at race, class and life in a nation that—like all others in the world—can seem both intimate and baffling to its own people. Edited excerpts from an interview:

At what point did you begin to think about cricket, and cricket fans, as the basis for a novel? 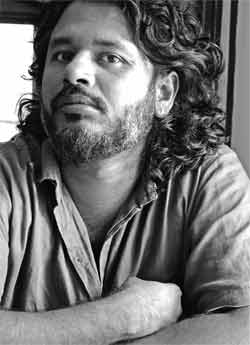 Ceylon satire: Karunatilaka’s Chinaman is in some ways reminiscent of of Mohammed Hanif’s A Case of Exploding Mangoes

While sitting at bus stops, in waiting rooms, I plotted out an elaborate career path for myself. Complete with rise and fall. Sadly, my cricketing talent couldn’t keep up with my daydreams. All these thoughts sat in my notebook until one day I was at a wedding and watched two distinguished uncles punching each other over a cricket argument.

The book didn’t evolve till much later, but the seeds began with these two threads.

How did the character of Pradeep Mathew take shape? Did he come first, or did your other protagonist and the voice of the novel, W.G. Karunasena?

When people ask me if Pradeep is a real person, my standard answer is, “Everything about Pradeep Mathew is true, except for his name." People forget how crap Sri Lanka was at cricket in the 1980s. We had a bit of talent, but no one would tour us because of our war and when we did play, we got thrashed.

There were quite a few Lankans, many of them spinners, who played a few games and disappeared.

When I first stumbled across Pradeep’s story, I struggled with how to make it play. I tried a straight, third-person biography but couldn’t make the tall stories stand up. Then I tried it as a series of interviews with those who knew Pradeep—the Citizen Kane approach. W.G. began as a minor character. An alcoholic cricket obsessive who remembered Pradeep. It turned out he had lots of stories, which he would force on me every morning. I didn’t even notice that he’d taken over the book until it was much too late. Sometimes, the best way to tell a tall tale is to get a drunk to narrate it.

‘Chinaman’ draws a very thin line between fiction and non-fiction. Can you tell us about that balancing act?

Contrary to appearances, I’m not that much into cricket. I don’t mind the game, but I’m hardly a fanatic like W.G. But I did know that if the book was to work, it would have to pass the scrutiny of cricket pedants. So I got stuck in and did my homework.

I watched every Sri Lankan match between 1982 and 1999, studied the stats, collected anecdotes and scribbled down more ideas than I needed. As many clichés testify, the truth can be pretty strange. Most of the stories in Chinaman are based on fact. I had to leave some of the best ones out. Every match featured in the book really happened. More or less.

All I really did was change the names so as not to get sued. Or to change them just enough, so that if I did get sued, I’d win.

Did you think twice about the title? At one point in the novel, you acknowledge how provocative it is. There aren’t a great many cricket novels. Did telling this story feel like you were entering unmapped territory?

It’s surprising that there aren’t many great cricketing novels considering the wealth of non-fiction on the sport, from the ubiquitous player biographies to more philosophical musings on the game.

I’m not sure it’s entirely untrodden ground though. The archetype of the mythical unsung talent exists in American sports folklore and I absorbed a lot of this. Work like George Plimpton’s The Curious Case of Sidd Finch and Bernard Malamud’s The Natural.

I basically took this archetype and adapted it to the subcontinent. It also seemed an interesting way to explore Sri Lankan themes outside of cricket.

But I guess it was this notion of freshness and discovery that attracted me to the project and made the writing of it so much fun.

On the other hand, we’re inundated with cricket journalism. Are there any cricket writers you like or turn to repeatedly?

I began with the masters, Christopher Martin-Jenkins and C.L.R. James, as well as sports-writing from the likes of Norman Mailer and Hunter S. Thompson.

The ones that I kept returning to were Simon Barnes’ The Meaning of Sport, Marcus Berkmann’s Rain Men and the writings of Lawrence Booth and Ed Smith.

Broadening the question, who are the writers you enjoy reading? Did any influence ‘Chinaman’?

I read a lot of Kurt Vonnegut to get that curmudgeonly tone for W.G. The character’s initials are actually a tribute to William Goldman, whose non-fiction writings on the screen trade have been a big stylistical influence on me.

But the main work that I borrowed from for Chinaman was a mockumentary done by Peter Jackson in the early 1990s called Forgotten Silver. It’s a brilliant piece about a genius film-maker who lived in obscurity in provincial New Zealand in the early 1900s and pioneered many great cinematic techniques.

This was long before The Lord of the Rings, and two things were obvious to me. That Peter Jackson would be a great film-maker, and that someday, I would try and tell a very similar story.

I’ve read that this isn’t your first novel. What happened to ‘The Painter’?

I think most writers have dead novels that sit in their attics or, as in my case, in a box under a bed. The Painter was a terrible book, written when I had no idea of what I was saying and less of an idea on how to say it. It was a supernatural noir thriller, part Fight Club, part Raymond Chandler, part The Exorcist. It was worse than it sounds.

I heard that Marina Lewycka wrote nine dead novels before finally publishing A Short History of Tractors in Ukrainian. The Painter was a great lesson in what not to do when writing about Sri Lanka.

After The Painter, I didn’t write for about five years, though I kept reading and travelling and scribbling notes. When Chinaman came along, I did the opposite of what I did during The Painter. It’s true that you learn more from your screw-ups.

What are you writing now?

The biggest lesson I learned from The Painter experience was to never talk about a project you’re working on. I’ll just say that it’s another strange Sri Lankan story. It’s quite ambitious and has nothing to do with cricket or drunks. I’ve begun the research and am quite excited by what I’m finding. But I’m a notoriously slow writer, especially when the deadline’s loose. So this one could take most of the next decade.