Thanks for Visiting Mint
You seem to have an Ad Blocker on. Please turn it off in order to continue, or whitelist Mint
HOW TO TURN OFF AD BLOCKER
OR
REFRESH IF YOU ALREADY TURNED OFF THE AD BLOCKER
Home >Mint-lounge >Features >Review: The High Mountains of Portugal

Review: The High Mountains of Portugal

In Yann Martel's latest book, human deliverance lies in the long arms of an ape

An eight-character tweet on Yann Martel’s new book of fiction, The High Mountains Of Portugal, would quite simply be: Read it.

Read it not just for the story—stories, in fact, since the book has three parts, each from a different era and, sometimes, different continents—or Yann Martel’s story-telling style, which offers complex ideas in simple sentences, but because this book takes forward one of Martel’s central concerns, animal-human relationships, in a direction that was presaged in his 2001 Man Booker-winning title, Life Of Pi.

The author, who has charted new territories in his exploration of this theme (think, for instance, of the dystopic world of We Ate The Children Last, where organ transplants using pigs’ digestive systems turn humans into cannibals, also revealing the underlying violence of a human society that fails to take responsibility for its actions), returns to the unique brand of spiritual deliverance that only animals seem capable of infusing into human lives—this time, chimpanzees in particular. 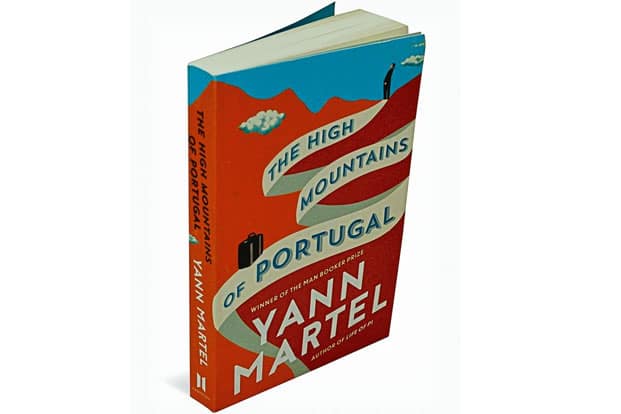 The book begins by plunging us into the middle of a tragedy. And, in a trope reminiscent of Gabriel García Márquez, a wholly comic response from the protagonist sets the tone for the novel. Life is often made incomprehensible because of tragedies, like the unexpected death of a loved one, and the only way to cope cannot but involve wholly fantastical solutions. Tomas, the protagonist of the first part, Homeless, begins to walk backwards after the death of his beloved and their child; he is, we are told, “Objecting". “Because when everything cherished by you in life has been taken away, what else is there to do but object?"

And he has good reason to: A rich uncle with a penchant for the new (this story is set in the first decade of the 20th century, and the motor vehicle has only just made an entry into urban consciousness) and disdain for Tomas’ family (his beloved was a servant in his uncle’s household) foists a motor car upon Tomas, who doesn’t know how to drive, when he learns of his nephew’s impending trip to the high mountains of Portugal. Tomas’ journey is almost Sisyphean: a vehicle that is so powerful that the driver can never quite master it; a journey that has no promise of a resolution; his inability to protect himself from the elements. Nothing about this journey offers any hope of redemption.

Tomas, an assistant curator at the National Museum of Ancient Art, has set out in search of a religious artefact that “would do nothing less than turn Christianity upside down". The maker of this artefact is a missionary priest who lived nearly three centuries before Tomas, and whose diary falls into the young man’s hands soon after tragedy hits. Tomas finds succour in this diary, forgotten by the Episcopal archives of Lisbon, and realizes instantly that Father Ulisses’ narrative mirrors his own crisis of faith.

Tomas’ journey ends with another tragedy, and though he finds this artefact in the village of Tuizelo, his heart is no longer in the search. Everything changes after Tomas accidentally runs over a small boy. The despair that befalls Tomas is narrated with excruciating beauty. “Everything is in its place, and time is moving with its usual discretion. Then, in an instant, without any warning, a little boy has tripped everything up. Surely the fields will notice; they will rise, dust themselves and come closer to take a concerned look. The road will curl up like a snake and make sad pronouncements. The sun will darken with desolation. Gravity itself will be upset and objects will float in existential hesitation. But no. The fields remain still, the road continues to lie hard and fixed, and the morning sun does not stop shining with unblinking coolness."

Two threads reappear in the stories that follow. In Homeward, we fast-forward to the third decade of the 20th century, where the mother of the little boy who died approaches a pathologist to conduct an autopsy on her husband. Autopsies are meant to reveal how a person died, but the woman asks the pathologist to tell her how her husband lived. The pathologist is dealing with a crisis too, we learn, but the autopsy that he conducts leaves the reader in no doubt, once again, of the magic of magic realism: Inside the husband’s body, he finds a chimpanzee, a bear cub and tokens of a life lived by someone who has grieved and coped with the death of a child. Each metaphor is concise.

The chimpanzee harks back to the great reveal of Tomas’ story, and presages the subject of deliverance we will encounter in the book’s final chapter, Home. This chapter is also the most fantastical of the three, and forms a sort of a interlude—it could well be argued that the great faith humankind had begun to repose in science in the first half of the 20th century, with the creation of the atom bomb and the heavy artillery for the world wars, finds its precise limitation in this small basement office of the Portuguese pathologist.

In the final chapter, Martel’s mastery in pulling all the threads together into a tight narrative weave is visible. We’re now back in contemporary times, and a Canadian senator whose wife has just died forges an unlikely friendship with Odo, a chimpanzee he meets on a random visit to an experimental laboratory. He buys the ape from the lab, sells everything he owns in Canada, and returns to Portugal—the village of Tuizelo, to be precise—which his parents had left when he was a baby.

Peter, the senator, realizes that his relationship with the ape, whom he takes on his journey, is one of love. And it helps him put his other loves, for his dead wife and his almost-estranged son, into perspective. The old man still has a lesson to learn, and teaching him is none other than an ape. “Peter has learned (from Odo) the difficult animal skill of doing nothing. He’s learned to unshackle himself from the race of time and contemplate time itself. As far as he can tell, that’s what Odo spends most of his time doing: being in time, like one sits by a river, watching the water go by. It’s a lesson hard learned, just to sit there and be. At first he yearned for distractions. He would absent himself in memories, replaying the same old movies in his head, fretting over regrets, yearning for lost happiness. But he’s getting better at being in a state of illuminated, sitting-by-a-river repose. So that’s the real surprise: not that Odo would seek to be like him but that he would seek to be like Odo."

This, then, is the book’s underlying lesson: Humans, when faced with loneliness, or an even deeper alienation (as in the Life Of Pi) or abject need (as in We Ate The Children Last) could well find the animal within, but that’s not all. Love, deliverance and joy are lessons that humans could well learn from another sentient species.