You can’t help it, I suppose," says Amrita Lahiri reflectively. “Associating Indian classical dance with women just comes naturally. The idea of the ‘beautiful dancer’ is such a feminized stereotype. You call to mind Sonal Mansingh’s eyes, the seduction of Yamini Krishnamurthy—all the usual associations." 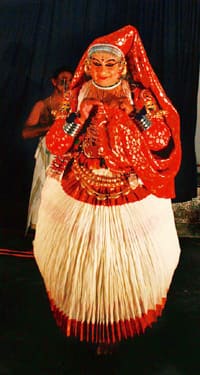 As Lahiri says, everyone remembers the late Kelucharan Mohapatra as a guru who could perform an Ashtapadi (an eight-line classical hymn) of the Gita Govindam with such delicacy that he was said to play Radha better than most women.

The danseuse has captured public attention in the last 50 years to an extent that has often caused observers to wonder about what will happen to the space carved out by the great male dancers—to say nothing of the great male characters, including the classical Shiva, Ram and Arjun.

“Who can compete with females who look like apsaras on stage?" dance historian Ashish Khokar asks rhetorically. “Economically, dance is still not a viable profession for men." The shift, Khokar says, became visible in the 1970s when male dancers, usually from traditional families, were sidelined by urban women who came from liberal families. Today, the most sought-after solo performers continue to be women. “Among the handful of names, Birju Maharaj and Raja Reddy come most readily to mind," Khokar says. “Who else is there?"

While male dancers occupying female space has a long history in Indian dance traditions, performances such as those of Kathakali artiste Margi Vijayakumar will highlight this aspect. On 27 April, Vijayakumar will perform the Poothana-moksham—a drama that reconsiders the demon Poothana’s end as one where the infant Krishna grants her moksha (salvation) by sucking the poison from her breast.

A group of male Bharatanatyam dancers from Kerala’s Kalakshetra will also recall the legacy of the institution’s great male exponents, in a performance called Shiva Panchakam, dedicated to the deity who’s also called nrityanarta or the eternal artiste.

Shobha Deepak Singh, director of the Shriram Bharatiya Kala Kendra in New Delhi, agrees that “99%" of dance institutions today still focus on women dancers. But in her own dance school, the ratio of male to female students is almost equal.

“I believe that we are seeing more male dancers than we used to," she affirms. “The infusion of martial art into dance that we’ve seen recently—the fashion for bringing, say, almost entirely male-oriented forms like Kalaripayattu into dance—has made more men enthusiastic about taking up dance as a career."

And the male solo dancer, Lahiri and Singh both predict, might find increasing space on stage again. A greater number of male students foretells a future where more male artistes might viably compete for roles with their female counterparts.

Singh points out that a renewed popular culture of male dance in film and particularly on television, with dance competitions and reality shows, might lead to an increased understanding of, and acceptance for, male performers. “They do tend to be less inhibited," she says.

Mudra Dance Week will be held at the NCPA, Mumbai, from 26-29 April. For the tickets and schedule, log on to Ncpamumbai.com