Home / Leisure / The sleuth from Vile Parle
Back
Share Via

The sleuth from Vile Parle

The sleuth from Vile Parle

Three female presences, not counting the gold-coloured Madonna of the title, light up Kalpana Swaminathan’s new crime novel The Monochrome Madonna. These are the ageing detective Lalli, a retired policewoman familiar to Swaminathan’s readers from two previous novels; Lalli’s niece Sita, a woman of literary inclinations with a deliciously tart tongue and an acquired interest in crime; and finally Swaminathan herself, a writer with a turn of phrase as stylish as that of anyone else on the contemporary scene, and considerable felicity with both dialogue and plotting. The opening chapter of The Monochrome Madonna, only three pages long, might serve as a case study in how to bring a reader flying on-board. There is the dramatic opening line (“I’ve always known I’d be stuck with a corpse some day, probably in the first week of October"), which introduces us to Sita, from whose point of view the story is told. The theme of corpse-ridden Octobers is elaborated with brief, intriguing descriptions of the trouble that has flared up in the lives of Sita, Lalli and their cohort Savio three Octobers running, as if the reader is already familiar with these cases. In this way, even if the reader is actually not, an air of intimacy between narrator and reader is cunningly established, and a kind of storytelling energy generated. There is also a murmur of resistance: We find Sita actually wants to sit down and write in peace, but in Lalli’s absence she has to follow the new case. We enjoy her grumbles, because it makes for a better and funnier story than if she had been ready and waiting.

And by the time the chapter ends, we are on site with “the annual corpse", and now the story must move both forward and, if it is to be resolved satisfactorily, backward too. Who did it? 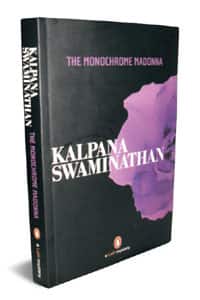 Thus, while the unravelling of the crime (or the book’s plot) is left to Lalli, the observation of this from without (or the book’s larger story) is entrusted to Sita, and it is this division of narrative duties that makes for the satisfactions of Swaminathan’s book. Indeed, the story is most interesting when it stays close to Sita’s point of view, by turns agitated, acerbic, distracted, and falls away somewhat when it gets too close to other characters, such as the testimonies of Sitara, Vinay and Savio. Swaminathan knows that even murder mysteries must have their moments of digression. At one point we are treated to a sudden meditation upon roses, followed by another passage on meteors, and realize this is a very independent-minded detective story.

The plot line of The Monochrome Madonna is competent at best, and perhaps too elaborate. But there are many lovely moments in the book, and the writing has a leanness, wit and easy grace that are in marked contrast to the earnest and windy phrase-making and imperfect control of register of so much Indian fiction in English. Lalli, Savio and Sita love not just sleuthery but also eating, drinking and talking, and there is a rich pleasure here not just in the business of death but in the quotidian satisfactions of life.

Vile Parle, the unfashionable Mumbai suburb where Lalli resides, should name one of its streets after Swaminathan’s charming detective.