If you’re the kind of reader who wants every poem to signal profundity and every novel to make a point, then be warned, Family Planning probably isn’t the right accompaniment to your cup of tea. If, on the other hand, you’re game for a loony romp through a completely implausible domestic drama, you’ve come to the right place. More farce than fiction, more house of mirrors than reality show, Karan Mahajan’s Family Planning may not enchant but it’ll certainly entertain. 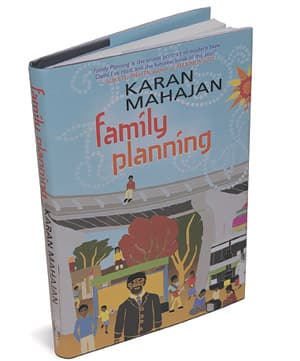 It’s become something of a rite of passage for first-time novelists in India to test the waters by telling their own tales, giving rise to the unkind moniker acne-lit. Mahajan is more ambitious: His adolescent protagonist’s story is interwoven with that of his minister-dad—a paterfamilias metaphor for the overpopulated socialist state—and though the author is as benevolent with father as with son, Arjun still emerges as the more sympathetic character as he tries to balance his rushing hormones with his dad’s.

Captured over a tight time-span of two days, Arjun’s concerns are Aarti, the girl who catches the same bus as him to a neighbouring school, a rock band he tries to set up with his bum-chums, and his slipping status as babysitter-in-chief of the unwieldy brood at home. Rakesh, on the other hand, is worried about Sangita, the wife he finds attractive only when she’s pregnant, a rival in the cabinet who is stymying his fancy flyover projects, and his slipping status in his eldest son’s life.

Mahajan has an eye for the ridiculous and an ear for comic dialogue that bear him out well in this somewhat pointless story. On the positive side, the farce never seems forced, the domestic chaos is well-etched and the humour is deadpan and unselfconscious—a rare enough quality in Indian writing. Consider this exchange between father and son, in which Rakesh tries to explain why Arjun was circumcised.

“I hate you," Arjun said, now nearly in tears. “Is this what a son needs to hear from his father? A judgment of the size of his penis? Hello, son, your penis is not regular-sized or good-sized or normal-sized, but instead, your penis is circumcised?"

There are such episodes through the book and the humour largely holds up despite the occasional lapse into Americanisms—Q-tips and tampons in the middle-class Ahuja household, really?—but, in the end, one is hard-pressed to see quite how they add up. Maybe it’s unfair to expect them to. That said, Family Planning is a relief from the spate of navel-gazing first novels we’ve been subjected to. Mahajan can only get better.