Can TV Ads join the fight for equality?

Not in the 1990s, but things are looking up. Now there's even an ad that says household chores have no gender

Advertisements are one measure of how society views its men, women, children, transgenders, gender-queer, and gender non-conforming, among others. Research has indicated that gender representation in media affects people’s attitudes and behaviours. Recall, for instance, just how popular the hairstyle of the Rasna Girl—a fountain of a ponytail barely inches from her forehead—became, when the advertisement aired in the early 1990s. (In them, Rasna Girl would ask her mother to serve the father Rasna, after he returns from a long day at work.) Of course, this hardly means that a gender-just advertisement, which is one that doesn’t subscribe to gendered roles, would change the way society thinks about gender. In fact, the reverse may be truer. But these depictions can certainly be seen as a litmus test for the way we don’t see sections of society. How many Indian advertisements with a transman in them can you think of?

With over 75% of urban India owning television sets according to Houselisting and Housing census data of 2011, it’s terribly easy to extrapolate the findings of this 17-year-old study to our context. Take, for instance, this Binaca print advert from the 1970s for a men’s talcum powder. Here’s what the copy says: “For years, you have used sweet, flowery, all-purpose talcs. Smelt exactly like your wife and baby. Now CIBA puts things into proper place with Binaca men’s talc. That smells, looks, is a talc for men." The main image, of a man with a flower in his hair, is clearly meant to mock the men who think it’s okay to have anything to do with flowers, let alone smell of one. As if the image wasn’t enough, the copy delivered the killer line—You, reader, smell like a woman (or a child interchangeably: both equally terrible a fate for a ‘real’ man). 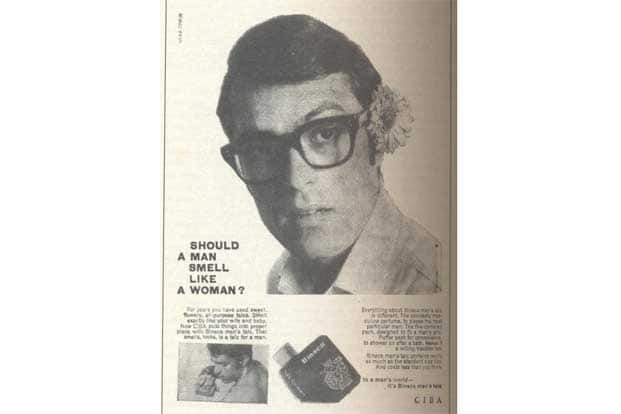 Are advertisements for men’s beauty products any different now?

Arjun Rampal is the brand ambassador for a line of Nivea grooming products for men—face wash, deodorant, and shaving lotion. This ad posits the difference between a man’s ‘face care’ —not ‘beauty regime’, okay—and a woman’s. Presenting a series of images that are meant to be funny because of their incongruity, Rampal’s voice-over concludes that men’s face care is simpler with this product. It’s less time consuming, and less painful, but it does the same thing that makes faces attractive because it reduces acne, dark spots and excess oil. The underlying message hasn’t changed since the 1970s. A man and a woman need different products. Men cannot use women’s product. And a man who uses techniques or products associated with women is just fair game for laughter.

It’s a truth universally acknowledged that a woman’s body can be used to sell anything. Take this advertisement from the 1970s of Rallifan, a table fan produced by the Ralli Group. A prone, sari-clad woman wearing a chiffon that tantalizingly displays her navel, hand suggestively placed over her hip, invites the viewer in to read a bland copy, which nevertheless uses choice adjectives that draw the similarity between the model and the fan. “Live with an elegant table Rallifan. Chic, streamlined…"

The navel still gets the eyeballs, and sells the fan.

This 2011 Orient PSPO fan (endorsed by Mahindra Singh Dhoni) too, has an elegant and chic young woman in traditional mid-riff baring attire. The setting is a meeting for an arranged marriage, where the woman suggestively wipes the sweat off her neck and inches closer to her intended groom. The man keeps moving away in fright, clearly unused to such proximity. He finally jumps off the couch and turns to his mother and says, “Garam hai". Terrible way for an arranged marriage meeting to end, but Dhoni explains the girl’s predicament. She wasn’t getting any air at the corner.

Advertisements also reinforce gender stereotypes. It presents people in socially-constructed roles and sells its product in this ‘normalized’ environment. This doesn’t always mean that the woman stays at home and the man goes to office. Some advertisements have managed to keep pace with changing times after all, and show women who work and lead teams, too. A 2014 Airtel advertisement showed a wife asking her husband to stay back late in the office to work on a project—she’s his boss at work—and then promptly goes home, makes dinner and calls him to return early. This sort of ‘keeping pace’ is symptomatic of how misleading such supposed gender sensitivity can be. The advertisement reinforced every stereotype in the book and made some new ones. A desirable woman, it seemed to suggest, was one who knew her place at home, if not at work.

However, things are looking up. The Cannes Lions festival which celebrates excellence in advertising created a new category this year called the Glass Lion award. It recognizes advertising that shatters gender stereotypes. Sanitary napkin makers Whisper’s campaign to “touch the pickle", Talwar Trader’s Life Saving Dot (on bindis that carried an iodine patch) and Procter and Gamble India’s ‘share the load’ campaigns were among some of the winners this year.

But here’s a good way to understand gender-just advertising. This advertisement by liquid soap makers Prill delivers its message simply. There is little overt advocacy. It’s not part of a campaign either. The advertisement simply depicts the reality of thousands of urban working couples—household chores have no gender, and the kitchen sink is a good place to start recognizing that.

The Sex Talk is a blog on gender, sexuality and blindspots