On seeing me leafing through The Little Book of Terror, a German friend remarked that it would make a great “toilet book"—a coinage most recently popularized by the British comedian Stewart Lee, evoking visions of a lightweight book with text and images. 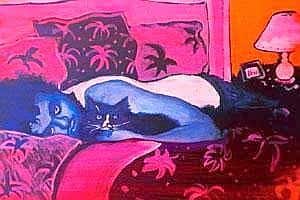 The Little Book of Terror is a set of five short essays, accompanied page-for-page by lurid illustrations, mostly portraits of “terrorists". As writer and journalist Amitava Kumar says in his foreword, Rockwell’s playful gallery of terrorists are neither particularly heroic nor particularly villainous. “They’re pictures that the terrorists themselves might put up on their Facebook pages," he says. Indeed, in these pages is the Portrait of the Terrorist as an Ordinary Man.

Rockwell has a PhD in South Asian Literature from the University of Chicago, US. While her art might appear nothing like that of her famous grandfather Norman Rockwell, the 20th century painter and illustrator whose incisive posters and magazine covers depicted scenes of American culture, it does cover common ground. Her paintings portray a more recent, and very different, American culture.

The first chapter, “Why Do They Hate Us?", starts off with a phone conversation between Rockwell and one of her Muslim students on the morning of 11 September 2001, immediately following the World Trade Center attacks. Rockwell narrates her student’s fears, and those of the dean of her college, before moving on to comment on bizarre plots hatched by the Federal Bureau of Investigation (FBI).

In Rockwell’s rendering, we see an apple tree laden with bright, jewel-like apples. On the left, like a fallen apple, is Kashmiri’s severed head (wearing sunglasses). A teacup lies fallen on the other side of the apple tree, creating a perfectly symmetrical mise en scène: how very convenient. The colours, purple, red and green, jump at us: how very pretty.

For all its technicolour charms, things start to tear through the veiled pretences soon. There’s Saddam Hussein clad in a polka-dotted gown, receiving “the best of all possible dental care" from the US government. Rockwell’s text is equally irreverent.

“The word ‘torture’ is probably used far more by Americans to describe visits to the dentist, the periodontist, the orthodontist and the oral surgeon than it is to describe waterboarding or taking photographs of prisoners of war in humiliating poses," she writes. “...How civilized, how supremely humane of the United States to supply Saddam with the best possible dental care in the world."

The bulk of the writing, and many of the paintings in the book, originally appeared on the blog “Chapati Mystery" (where she posts under the pseudonym Lapata).

Although branded as “art/non-fiction/current events", The Little Book of Terror isn’t neat reportage or artistic bravado. It is poignant and profane. It is the big book of things people don’t say in genteel society.

If this were a toilet book, that would be one long visit to the loo.