It is a balmy evening at the Karnataka Golf Association (KGA) course. Ever since the airport was relocated to Devanahalli on the outskirts of Bangalore, the traffic on the old “Airport Road" in the heart of the city has gone from chaotic to merely congested. 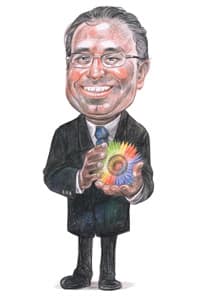 Self-effacing: Vaswani believes that his ‘blue-eyed boy of Premji’ tag is a media creation. Jayachandran / Mint

The KGA is one of the few lung spaces in a city that has grown too fast, with glass and chrome structures dotting its skyline. I am there to meet Suresh Vaswani, the joint chief executive officer of Wipro’s IT business, which brought in more than 80% of Wipro Ltd’s $5 billion revenue in 2008-09.

After heady growth, when the sector as a whole grew at a CAGR (compound annual growth rate) of 28% over five years, the Indian IT sector is facing big challenges. In recent times, Vaswani and his co-CEO Girish Paranjape have had to navigate the spectre of slowing growth. Key markets such as the US and UK have been facing turbulence, clients have been playing hardball on pricing and margins have been under pressure.

Vaswani had suggested that we meet at the KGA instead of the Wipro headquarters at Sarjapur. Despite the traffic, he is on time and looks relaxed. The trademark French beard, which he sported for years, has disappeared; the clean-shaven Vaswani looks younger than his 49 years.

I later discover why he wanted to meet at the KGA: For the last six months, he has been spending time on the greens. “It was at the instance of my younger son that I picked up the game. Now I thoroughly enjoy it and try to spend as much time as possible, though my handicap is something I would discuss only a year later," he laughs. He adds that the golf course is a great venue to bond with clients, “though I haven’t yet sealed any deals on it".

We are seated at the club house, where Wipro’s chief marketing officer Jessie Paul joins us. We order some entrées while we talk.

Vaswani has always been seen as the blue-eyed boy of Azim H. Premji, the chairman of Wipro and its single largest shareholder. But more on that later.

After completing his engineering from IIT, Kharagpur, Vaswani joined SKF Bearings. “The learning there was good but I wanted to grow, so I joined the IIM after working for a couple of years at SKF." During the placement season at IIM, Ahmedabad in 1985, a not-so-well known company called Wipro came calling. Despite offers from a “couple of multinational companies", Vaswani chose to join Wipro as “it sounded interesting and computers/IT was just taking off in the country".

Twenty-four years on, he was named joint CEO of Wipro Technologies. From a rookie who pushed boxes (PC hardware) to heading the business is no mean feat.

Vaswani says he can still recall the name of the IT department head who gave him his first sales order in Mumbai, where he was posted. “Mumbai, or Bombay as it was known then, was divided into various blocks and I was allotted one of them. I remember rushing in the locals (trains) to meetings from one end of the city to another. It was a great time."

The first big break came in 1991, when Premji was looking for a personal assistant. “Suddenly, one day my then immediate superior said you have to go and see ‘him’ in his office. I was thrilled. The two years I spent with him were one of my greatest learning experiences."

Learning from Premji was better than any management training—he got to see the working and decision-making process at close quarters. Vaswani says Premji is very disciplined and hard-working. “He expects everybody to give themselves completely to the task at hand. He is forgiving when genuine mistakes are made. As long as the effort and intention are there, he is very understanding."

Vaswani’s next big break came when Wipro set up a joint venture in 1995 with Taiwanese PC major Acer to sell hardware in India. “I was the CEO of the JV and both the partners trusted me to look after the best interests of the organization."

Even when Acer and Wipro parted ways, the relationship didn’t sour. “That is a key learning I had from Premji. Sometimes in business one has to part ways. But even with competitors one can still have a good relationship."

What set Wipro apart from some of its peers in the domestic market was that early on it tied up with global IT players such as SAP, Cisco, Sun Microsystems, H-P, IBM and Microsoft. While Wipro Technologies, its global IT arm, competed in some spaces with these companies, it forged partnerships with them for the Indian market in a joint go-to-market strategy. For instance, if SAP sold its software to an Indian customer, Wipro would do the implementation. Compared with other Indian IT companies, Wipro saw the domestic market’s potential fairly early. This was also evident when the company bagged the Unitech Wireless and Aircel deals over the past couple of years, helping it break IBM’s near monopoly in the Indian telecom services market.

And the blue-eyed boy tag? Even as Vaswani ponders and weighs his response, we order his favourite Chinese dishes: hakka noodles and stir-fried vegetables.

There were many contenders for the CEO’s position, including long-time Wiproites such as Sudip Banerjee and Sudip Nandy. After Vaswani was made co-CEO with Paranjape, Banerjee left to head L&T Infotech and Nandy to head Aricent.

Those departures were unconnected, protests Vaswani. It helped his case that unlike the cerebral Paranjape, who built the company’s BFSI (banking, financial services and insurance) business, Vaswani is more the marketing maven with a silver tongue. “I don’t know why this perception has been created. Wipro is a meritocracy. Nothing but hard work and results get rewarded. Blue-eyed is a tag which the media pins on me."

Can one scabbard hold two swords? Can the current co-CEO arrangement work? “Why not? Both of us clearly run businesses worth a couple of billion dollars. That provides enough challenges. We have our own working styles, but are clearly aligned to the larger organizational goals," says Vaswani. And the relaxed look ? “Off on a small family vacation before the quarterly numbers season kicks in," he grins.