When Gurcharan Das—newspaper columnist, playwright, novelist—turned 50, he quit his job as the head of the Indian arm of a multinational company to become a full-time writer. In 2002, he went to the University of Chicago to devote himself to studying Indian classics in Sanskrit. There he was increasingly drawn to the epic Mahabharat and what it said about the human condition. His latest book The Difficulty of Being Good: On the Subtle Art of Dharma explores what the epic says about dharma, in all its varied meanings, and its relevance today. Edited excerpts from an interview: 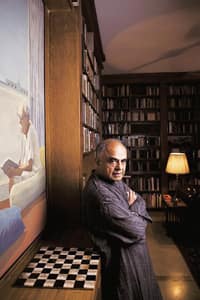 You began reading the Mahabharat to find out the meaning of ‘dharma’, or how to conduct one’s life. Were you successful in your quest?

Mahabharat is not a self-help book and my book will not fall in that category either. The epic is obsessed with dharma (but) nobody looks to God to answer the question—Why be good? The Mahabharat asks at one point—“Where does dharma come from? Where does the authority of dharma emerge from?" And people say, “Maybe it’s the Vedas. But hang on—the Vedas contradict each other too. So let’s ask the wise Brahmins. But wise Brahmins are fighting with each other. So maybe we have to depend on ourselves." So the quest for dharma is a rational quest. Mahabharat seems to suggest that there are no easy rules. Nevertheless, it leaves you with ideals.

You also wrote this to cure yourself of what you call “third stage melancholy", the third stage being the onset of ‘vanprastha’, when a man begins to retreat from worldly life. Are you happier now?

A lot of my third stage melancholy was caused by governance failures. The fact that the rickshawallah has to pay one-fourth of his earnings to the police. I see the Mahabharat as holding the mirror to the policeman who is taking hafta (a bribe). Maybe my melancholy will only go away when we do these reforms. But there was also a personal element to the melancholy—you retired at 50 in the middle of a very successful career.

That is correct. And a lot of people turn to religion at that point. I resisted that temptation; instead of turning to religion, I turned to dharma.

But the Mahabharat is a religious text, so you did turn to religion.

Ninety-five per cent of the commentary on the epic that you have cited is by European and American scholars. It says something about Indian scholarship.

Yes, it does. I think the last Indian scholars I cite were writing in the 1930s and the 1940s. Great scholars like (P.V.) Kane, who wrote the history of the Dharmashastras. Basically, after independence we did not produce any serious scholars.

What explains the enduring reverence for Krishna, who is guilty of so much trickery and deceit in the Mahabharat?

You have to see Krishna at many levels. If you see him as human—as one of the many characters or god with a small “g", you can certainly talk about his failures. But there are characters in the epic who see him as God with a capital “G". Like Uttanka the hermit. He is very angry with Krishna. “How could you let it happen? You were God, why didn’t you prevent the war?" And Krishna is taken aback. He says, “I couldn’t, it had to happen. There are some things that even I can’t control."