Ihad just landed in Siem Reap, a place made famous for its proximity to Angkor, an archaeological site strewn with remains of the Khmer Empire. It is a popular destination: well over two million international visitors pass through the petite Siem Reap International Airport annually. The news that I would be visiting had led to several oohs and aahs from colleagues who had recently been there. They all wanted to go back; their first trips had been magical. One of them, an American, had lowered her voice to a whisper and told me “It will change your life. I know it did mine. I have never quite seen anything like it. It was am-ay-zing" 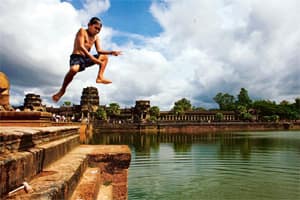 Close encounters: A boy jumps into a tank at the Angkor Wat complex. Paula Bronstein/Getty Images

For our stay, I had picked an eco resort called Sojourn (“for journeys of an entirely different nature") that offered boutique villas away from the backpacker and tourist heavy “downtown". It’s a refreshing sort of place, sitting as it does in the heart of Treak village, a settlement of 200-odd families. Around it, bulbous lotuses grow wild, roosters, ducks, and swans troop around without a care in the world; rain-fed ponds brim with water snakes, spawn, and insects; and thickets are heavy with fruits and vegetables.

And yet, we found ourselves struggling to enjoy this “sylvan scape", niggled as we were by the thought: Did we travel this far to see a village?

The next day, at Angkor Wat, our English-speaking tour guide tried to explain to us stories of Lord Vishnu, of seven-hooded nagas and nubile apsaras, of devas and asuras, all etched into intricate bas-reliefs of the nearly 1,000-year-old temples. “And that, you see with beard, is Indian high priest, Saa-dhoo" he says. “We know," my father tells him.

The merits of Angkor Wat, Bayon and Baphuon, the three main temple complexes in Angkor are of course obvious. These are some of the oldest monuments that exist in the world, and yet display a sophistication of architectural design that would put to shame any contemporary creation. A group of foreigners who stood near us could barely breathe with astonishment. Only the distraction of even more bizarre stories about Brahma, Vishnu and Maheshwara could nudge them past their disbelief of exactly how ancient and how grand these temples were. 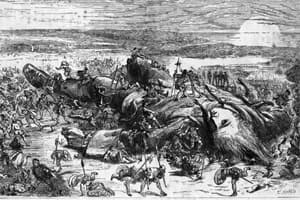 An image from Gulliver’s Travels, which promises that travel brings a new world. Hulton Archive/Getty Images

Later, sitting underneath the stern gaze of a stone-faced Jayavarman VII in Bayon, a temple inspired by Buddha (or Brahma, if you prefer—there is no agreement on whether the temple is dedicated to Buddha or Brahma) in Angkor Thom, I wondered if my holiday was being ruined by the burden of the travel narratives I carried.

As an urban, English-speaking Indian, my idea of travel is borrowed. From the adventures of Phileas Fogg and Passepartout to the incredible travels of Lemuel Gulliver, my childhood was littered with stories which promised that distance would lead to a different world. Tintin offered clear proof of this. His travels came illustrated with vistas and experiences far removed from his home (or mine). In fact, even home looked different when seen through the eyes of Rudyard Kipling’s Kim. In later years, Graham Greene, Paul Theroux and Jack Kerouac would confirm this understanding of travel with their epic journeys and discoveries of the strange, the weird and the different.

In Siem Reap, I realized, this is a curse. The “narrative of difference" is really an alien—Western—construct that is grounded in the fact that, historically, only the privileged could travel. It was only the men of great colonial empires of the last millennium—the British, the French, the Dutch, the Portuguese, the Spanish—who could hop on to their ships and set sail to unknown lands, or rather, lands unknown to them. Travel was always about new discoveries they made, about places they never imagined existed. Publishers and editors here, bereft of budgets and any significant pool of good travel writers, gladly reproduced these narratives for the local population. We consumed stories about our own lands written up in evocative prose that transformed our daily lives into an incredibly thrilling experience. Asia became a theme park and we all bought tickets.

Perhaps it is unfair to expect it any other way. For the average Indian, travel revolves around pilgrimages, weddings and, more recently, business with fixed agendas. The idea of recreational travel, the idea that summer holidays and vacations could mean something other than going back home—that travel could be for its own sake—has created the need for charting a whole new unfamiliar space, and the availability of international travel writing at the nearest book store (whose primary audience remained Western) is a comforting crutch.

Even revered travel writers of Indian origin, like V.S. Naipaul and Pico Iyer, offer a mostly foreign gaze characteristic of their non-resident status. It is revealing that India’s best-known resident travel writer, William Dalrymple, is a Scotsman, and his City of Djinns regularly outsells Khushwant Singh’s Delhi. More recently, Suketu Mehta’s Maximum City created some hope of an authentic Indian travel narrative, but is yet to dislodge Gregory David Roberts’ definitive Mumbai book—Shantaram—from the popular imagination, for readers, just as much as writers and travellers, are victims of this neo-Orientalist travel discourse. As the late Edward Said argued, so authoritative is this Western articulation of Asia (and West Asia and Africa) that “no one writing, thinking or acting on the Orient could do so without taking account of the limitations on thought and action imposed by Orientalism". 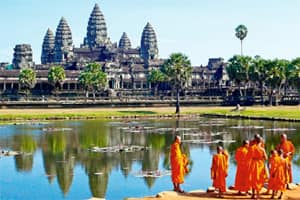 Take the idea of summers, for example. The idea of “glorious", “sun-filled" summers spent outdoors getting a “high colour" or a “brilliant tan" is grounded in a climatic reality: the western hemisphere is subjected to bitter winters for four-five months every year. The onset of summers then is indeed something to welcome and travel magazines are right to eulogize its many benefits.

Travelling to Helsinki, Finland, last June, I stared in dismay at hordes of Finns, sweat streaking their faces, drunk on joy of 23-hour days steaming at 30 degrees Celsius (remember there is limited ventilation, a precaution for the winter). It was the hottest summer Finland had seen in years and they couldn’t get enough of it. Having travelled from a city that makes me sweat practically every day of the year (if it is not toasting me with dry heat) to see the magic of the Nordic, of being in the Arctic Circle, I was crestfallen. If only I had been seduced by travel writing exulting the charms of a white Christmas in the border town of Imatra, or the believe-it-or-not temperatures of Lapland, and encouraged to ditch the “best time to go".

Is it possible for tourism departments and tour guides to rethink and reframe their spiels in culture-specific contexts? Can the ancientness of Angkor be referenced to the 14th century ruins of the Vijayanagara empire in Hampi, Karnataka, or to the 13th century Konark Sun Temple in Orissa—narratives that allow us to marvel at the shared ancestry, the linked histories? Can the writing about Cambodia’s Tonlé Sap, the largest freshwater lake in South-East Asia, now an exploitative narrative that features floating destitution not shift instead to the immensity and fertility of the Great Lake? As a culture that grows up to respect rivers and lakes as sources of sustenance and spiritual deliverance, are we not uniquely placed to appreciate lives lived in perpetuity by the Tonlé Sap’s banks? Free from the distractions of “white guilt", can we not instead delight in the fact that the green coconuts here are of spectacular size, and their taste sweetest in all of Asia? Or that the wild lotuses growing effortlessly in Siem Reap’s villages would be considered a prize pick anywhere? Can we not get a little closer, penetrate a little deeper, discard the differences and instead celebrate the nuances on offer?

On one of our rest days in Siem Reap (being “templed out" in Angkor is as real as altitude sickness), my mother and I signed up for a Khmer cooking class. It began to rain furiously and our “classmates" decided to stay inside. And so we began cooking, just the chef and us. 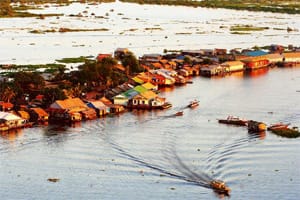 My last day was kept for a sunrise at Angkor Wat, but I arrived a little too early and my driver, Sary, suggested we head out to Banteay Srei, a 10th century Hindu temple, about 32km from Angkor. We sped through the ink blue predawn, a light rain pattering on to the windscreen and arrived at Banteay Srei just as the sky dissolved to a mysterious grey. At barely 6am, we were the only ones here.

Sary, a soft-spoken man of 60-odd years, took me around the tiny temple, the only one built with pink stone (most being in red sandstone), and we stared at the clefts left behind where Shiva lingams should have been (“stolen, all stolen," he said). We spent some time sitting by the statues of monkeys and then came out for a cup of Cambodian coffee. He talked about his days as a guerrilla fighter for the Cambodian People’s Party, the years he spent in the forest fighting Pol Pot’s men, and the great coffee the Vietnamese would bring in from across the border. His eyes moistened as he talked about his pregnant aunt being killed in front of the family, about how angry he felt. “But now it is all over. My country has peace," he said, “the young build new country". On our way back, we stopped at Ta Prohm, more famous as the “Angelina Jolie temple" from Lara Croft: Tomb Raider. Standing atop a pile of rubble that’s been there for 900 years, I stared in disbelief at the spung tree that holds the temple in a stranglehold, its unimaginably thick roots snaking around the entire complex (incidentally, Jolie’s connection with this place is just as entangled as the spung tree—her eldest son, Maddox, is Cambodian).

Sary knew by now to not bother with a historical description, and instead told me of the erstwhile king cobra burrow in the temple (“Now no more, eaten already"). He has been coming here since he was six years old, and he took me through completely dark pathways and past areas cordoned off for restoration work, giving me a closer look at Ta Prohm’s moss-kissed beauty.

In the end, I did succumb to the charm of Siem Reap. Throughout my trip, memories from my travels to West Bengal, to Orissa, to Kerala and Karnataka came back to me, but instead of lessening, it enhanced my appreciation. Without the distraction of differences, I could rest my mind on the essential, teasing out more meaning than my colleagues had promised.

Sometimes seeing our own existences recreated on another canvas, with a patina of colours we recognize but perhaps don’t use ourselves, can create some of the most memorable travel experiences. No, Siem Reap didn’t change my life, but it was a pretty amazing trip.