A play in a movie

From corrupting influence to comic relief, theatre has played many roles in Indian cinema

In Amiya Chakrabarty’s Basant (1942), the singing stars of theatre rise and ebb in Baroque concert halls with velvet curtains and painted backdrops. The striking Mumtaz Shanti made her debut in this Bombay Talkies melodrama as a talented orphan who succumbs to the pull of stardom. Her tryst with show business becomes a series of tribulations in a world ruled by box-office receipts and unscrupulous stage managers.

On celluloid, theatre has played many roles over the years, indicating as much a shift in the way entertainment is consumed, as the malleable nature of the medium itself. In the early years of cinema, theatrical interludes heralded a song.

In Basant, women of the stage appeared to ascend to a position of power, but backstage intrigue clipped their wings. In Mehboob Khan’s Roti (1942), Begum Akhtar’s dispassionate Darling gives up a glittering stage career for the gilded cage of marriage to a capitalist.

These were all cautionary tales—theatre as a corrupting force was a leitmotif first encountered in Phani Majumdar’s Street Singer (1938), Basant’s thematic predecessor.

The live singing and unfussy stage narratives of the early films soon gave way to the spectacular production numbers popularized by the showmen of the 1950s (V. Shantaram, Raj Kapoor)—they are now de rigueur in Indian film.

With umpteen costume changes and outlandish sets, the stage sequences in Shantaram’s songs had more in common with Busby Berkeley musicals than the nritya natika. Of course, there was Uday Shankar’s gem Kalpana (1948), which contains the most authentic representation of staged dance on film till date, with 82 sequences in Shankar’s signature East-and-West fusion style. In Chakrabarty’s retread of Basant—Kath Putli (1957)—danseuse Vyjayanthimala Bali shouldered the rags-to-riches tale, but by this time, singing stars had been replaced by dancing queens.

Slowly, the ethos of theatre was supplanted by the more exalted (though equally corrupting) universe of cinema, starting with Shaheed Latif’s Sone Ki Chidiya (1958) and Guru Dutt’s Kaagaz Ke Phool (1959). In Satyajit Ray’s Nayak (1966), theatre embodied the fleeting early idealism of a big cinema star (Uttam Kumar), while in Raj Kapoor’s Mera Naam Joker (1970), it was a stepping stone to a career in film —the rapacious stage manager was now the cigar-toting film producer.

In films like Hrishikesh Mukherjee’s Anand (1971), Johnny Walker’s amateur theatre group was a small-time concern only good for a few laughs, even as lines from K. Asif’s Mughal-E-Azam (1960) set up the film’s poignant climax. In 2001’s Lajja, Rajkumar Santoshi pays tribute to these antecedents when Madhuri Dixit-Nene, star of a provincial theatre outfit, is introduced with a lustrous Anarkali melody.

Of course, Kundan Shah’s Jaane Bhi Do Yaaro (1983) is best remembered for the sequence in which the characters infiltrate a dramatization of the Mahabharat, to hilarious effect. Satish Shah, as the corpse literally standing in as Draupadi, is the pièce de résistance.

Hindi cinema is full of capers in which actors sneak into plays in progress when attempting to escape from goons or the police. The mediocrity and self-importance of stage actors is a source of mirth, especially in spoofs of the Mahabharat or the Salim and Anarkali fable (which Shah’s film lampoons). The yearly Ram Leelas, though, were a tool for morals, especially when involving characters based on the Sita paragon. In Lajja, Dixit-Nene, is called Janki (a name for Sita), and refuses to endure the agni pariksha on stage in one scene. As she spouts feminist invective, the nervous supporting players go into comedic overdrive.

The twilight of a stage actor has inspired several cinematic takes. In this year’s Natsamrat, Nana Patekar is a stricken figure headed for oblivion. We have encountered this blighted creature before, feeding off delusions of grandeur, struggling to keep the once august torch of performance aflame. Amitabh Bachchan’s wilting Shakespearean actor in Rituparno Ghosh’s The Last Lear (2007), Mohanlal’s teetering Kathakali doyen in Shaji N. Karun’s Vanaprastham (1999), Mithun Chakraborty’s fading ventriloquist in Goutam Ghose’s Gudia (1997) and Pavan Malhotra’s unemployed bohurupi in tiger guise in Buddhadeb Dasgupta’s Bagh Bahadur (1989), are all kindred spirits.

Dasgupta’s films especially are rich with theatrical resonances. His Phera (1986) takes us to the heart of the Bengali jatra, and is one of Indian cinema’s forgotten masterpieces. The film’s central conflict is that of a jatra company being taken over by a timber merchant. In the beautiful Uttara (2000), a troupe of natua dance performers from Purulia becomes the link between a community’s troubled present and pristine past.

The Merchant Ivory Productions film Shakespeare Wallah (1965) dealt with a similar dichotomy. In it, Geoffrey Kendal’s portable “Shakespeareana" troupe took the Bard across India. Its integrity of performance stood in contrast to the mendacity of Bombay cinema embodied by Madhur Jaffrey in the film. An equally hollow theatre zeitgeist is the subject of Govind Nihalani’s Party (1984), in which playwrights, directors and dilettantes congregate at the soirées of arts patron and socialite Vijaya Mehta—all symptoms of a deep cultural malaise.

Films have also borrowed tropes from theatre. In Basant and other Bombay Talkies films, the slender Mumtaz Ali was the perfect foil for the leading ladies he danced circles around. The feminine male dancer or nachya, accentuating the womanhood of the leading lady, was a trope picked up from nautanki, a form fairly well represented in Marathi cinema—Shantaram’s Pinjra (1972) remains a definitive opus. 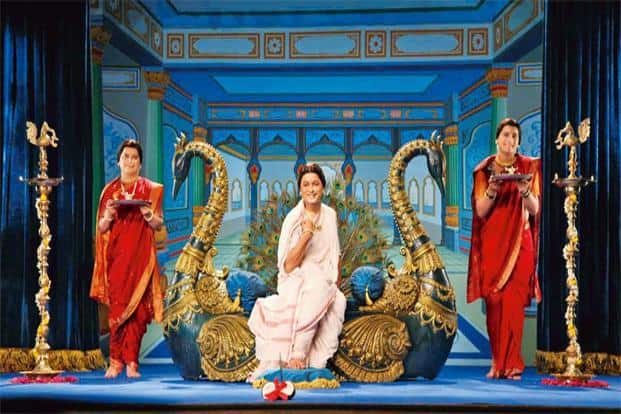 In recent years, Ravi Jadhav has given us both Natarang (2010), based on a nachya’s journey, and the glossy Balgandharva (2011), a biopic of the famous female impersonator, which evoked the art deco brilliance of turn of the century sangeet natak. Similarly, Ghosh delineates the jatra exponent, Chapal Bhaduri, with dignity in Kaushik Ganguly’s Arekti Premer Golpo (2010), in which Bhaduri’s assuming of female personas allows a transgender documentary film-maker (also played by Ghosh) to accept herself.

Some films continue to mount elaborate set pieces in the name of theatre—the bhand pather inspired Bismil in Vishal Bharadwaj’s Haider (2014), for instance. In Maneesh Sharma’s Fan, unassuming middle-class parents become backstage impresarios to showcase their son’s stage act. In Chaitanya Tamhane’s Court (2015), the dangers of parochial theatre simmer against the backdrop of a court case in which a folk activist-performer is being tried for sedition. In Imtiaz Ali’s Tamasha (2015), we are introduced to a disarmingly spontaneous, glib storyteller who relates heartwarming stories with a homespun flavour. That these tales, when transferred to stage in this film, become high-pitched spectacles points to the inability of Indian film-makers to depict Indian theatre as it truly is.