The archipelago of Alfred Wallace

The archipelago of Alfred Wallace

It is difficult today to imagine a name other than Charles Darwin associated with the theory of evolution and its enormous cultural and philosophical consequences for Western thought. But Darwin was hardly an isolated genius. His theories, and his reputation, were built on the work of fellow natural scientist Alfred Russel Wallace: In their own day, the theory of natural selection was known as the Darwin-Wallace theory.

Like so many great works of Victorian cultural imperialism, it also remains annoyingly, deliciously readable, much like that other seminal work of the natural science canon, Darwin’s The Voyage of the Beagle. From volcanoes in Borneo to an ethnography of “Hindoo"-influenced Bali, Wallace’s scientific rigour and his pioneering interest in the biogeography of the region come together in a long, learned, but terrifically lucid work. The “land of the orang-utan, and the bird of paradise" chronicled in his book would capture Britain’s interest in a region where, as Wallace politely put it, they had “few possessions". Years later, Joseph Conrad would take to sleeping with a copy at his bedside. We might speculate that Darwin, to whom The Malay Archipelago was dedicated, did the same.

Alfred Russel Wallace’s ‘The Malay Archipelago’ is now in the public domain and is available as a free download on Google Books and the Internet Archive. Selected excerpts:

At about 7,500 feet we came to another hut of open bamboos, at a place called Kandang Badak, or “Rhinoceros-field," which we were going to make our temporary abode. Here was a small clearing, with abundance of tree-ferns and some young plantations of Cinchona. As there was now a thick mist and drizzling rain, I did not attempt to go on to the summit that evening, but made two visits to it during my stay, as well as one to the active crater of Gedeh. This is a vast semicircular chasm, bounded by black perpendicular walls of rock, and surrounded by miles of rugged scoria-covered slopes. The crater itself is not very deep. It exhibits patches of sulphur and variously-coloured volcanic products, and emits from several vents continual streams of smoke and vapor. The extinct cone of Pangerango was to me more interesting. The summit is an irregular undulating plain with a low bordering ridge, and one deep lateral chasm. Unfortunately there was perpetual mist and rain either above or below us all the time I was on the mountain; so that I never once saw the plain below, or had a glimpse of the magnificent view which in fine weather is to be obtained from its summit. Notwithstanding this drawback I enjoyed the excursion exceedingly, for it was the first time I had been high enough on a mountain near the Equator to watch the change from a tropical to a temperate flora. 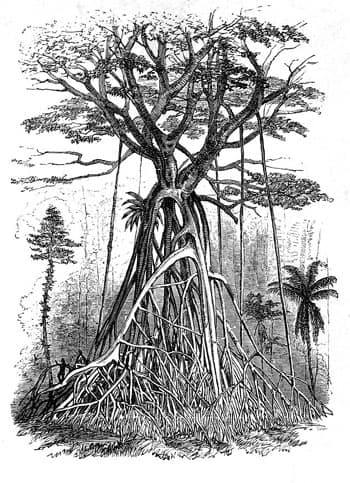 The colonizing eye: Wallace’s book is peppered with illustrations of local foliage and detailed anatomical sketches.

In which Wallace adopts a baby orangutan

While carrying it home it got its hands in my beard, and grasped so tightly that I had great difficulty in getting free, for the fingers are habitually bent inward at the last joint so as to form complete hooks. At this time it had not a single tooth, but a few days afterward it cut its two lower front teeth. Unfortunately, I had no milk to give it, as neither Malays, Chinese nor Dyaks ever use the article, and I in vain inquired for any female animal that could suckle my little infant. I was therefore obliged to give it rice-water from a bottle with a quill in the cork, which after a few trials it learned to suck very well. This was a very meager diet, and the little creature did not thrive well on it, although I added sugar and cocoa-nut milk occasionally, to make it more nourishing. When I put my finger in its mouth, it sucked with great vigor, drawing in its cheeks with all its might in the vain effort to extract some milk, and only after persevering a long time would it give up in disgust, and set up a scream very like that of a baby in similar circumstances.