‘RK Narayan is one of my influences’

Zimbabwe-born British author Alexander McCall Smith has readers all over the world—mostly those with a penchant for everyday life fables and little mysteries unfolding in small towns—and a fascination for Africa. The author was recently in Kolkata to inaugurate the city’s annual book fair. 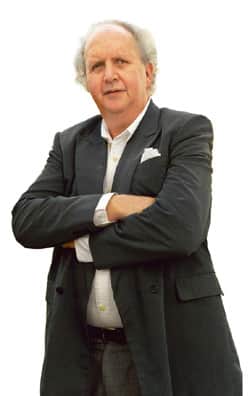 Your new novel Corduroy Mansions is a daily novel appearing in The Telegraph (UK). Is this the future of reading?

Serial novels have existed since the Victorian age. Dickens wrote in that way; Tolstoy, too, wrote serial publications. What I’ve done with Corduroy Mansions is use podcasts and other online audio devices to tell my story. A lot of people don’t like to read on screen. But I don’t think this means the future of books will change. The book remains a physically satisfying object and the handiest way of reading—it will never become extinct. Electronic books, the Sony e-Reader for example, are getting better, but they haven’t replaced the book.

You were born in Zimbabwe but chose Botswana as the setting for your best-selling No. 1 Ladies Detective Agency series. Are you depressed or disturbed by what’s happening in Zimbabwe now?

I tend not to get involved in politics, but I am certainly saddened by the current suffering in Zimbabwe.

Have your academic publications such as The Criminal Law of Botswana and The Forensic Aspects of Sleep influenced your writing?

To the extent that I was professionally concerned with criminal law and the analysis of human action from the point of view of responsibility and the attribution of responsibility, there has been an influence. Particularly in the Isabel Dalhousie books, where Isabel thinks a great deal about the implications of her acts and the acts of others.

How was the Really Terrible Orchestra formed? (Smith is the founder member of this band and plays the bassoon. They have a concert coming up in New York on 1 April).

My wife and I founded this orchestra when we realized that there was a demand for an amateur orchestra for people who weren’t really good at any instrument. An awful lot of people wanted to play because it was their dream. We have some very amusing concerts. The ones at the Edinburgh International Festival are always sold out.

What or who has influenced your writing the most?

Well, in literary terms, W.H. Auden is very influential and my characters often quote Auden. As far as the novels and short stories are concerned, the writer who is one of my influences and absolute favourites is R.K. Narayan. I could not have written the Mma Ramotswe books had I not read his books. He managed to create a whole world out of small events. Occasionally, you get a major event where something important is happening in the background, but for most parts, he’s talking about people’s day-to-day lives and their ambitions. Barbara Pym and Jane Austen are in the same category. Austen said that all she was doing was paint a picture on a tiny square of ivory.

What are you writing next?

I’ve just finished Corduroy Mansions that’s still being published in The Telegraph . I’m writing my next Isabel Dalhousie book and the next Portuguese Irregular Verbs book. I write four-five books a year, so I’ve always got something that I have to start.