Home / Leisure / The private life of middle India
Back
Share Via

The private life of middle India

The private life of middle India

It is easy to hail director Dibakar Banerjee’s next film, Love, Sex aur Dhokha, as outré or trailblazing. Or to write it off as gimmicky. Made with a budget of Rs2 crore (produced and distributed by Balaji Motion Pictures), LSD, as it’s being called, tries to simulate the clumsiness of a novice film-maker. But what the audience might see as a problem is crucial to the core of the movie. 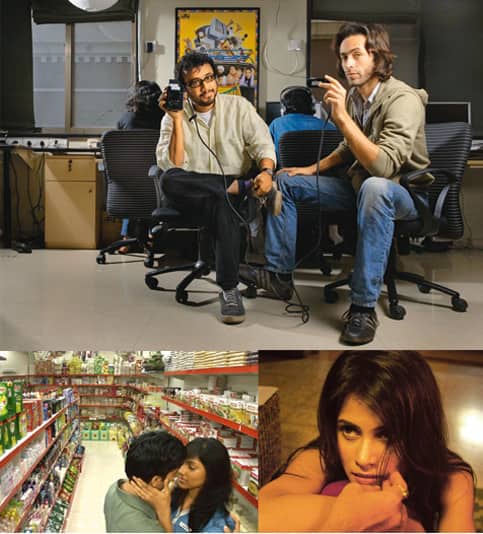 Banerjee uses the camera and the digital format not to beautify or even interpret human stories, but to present the stories threadbare—as they would unfold in real life. Some of the footage is shot entirely as an ordinary surveillance camera would record real events; some of it is shot with a hand-held camera, with deliberate disregard for conventional frame compositions—half a forehead cut off by the camera; a subject shot off-centre; badly lit interiors.

This is Banerjee’s third feature film, after Khosla ka Ghosla (2006) and Oye Lucky! Lucky Oye! (2008), and it’s a distinct departure from them. Many Indian films have been shot in the digital format, but LSD is the first where the format is used in a calculated fashion for a deliberately shoddy, home-video kind of effect.

As the film got its final touches and mixes on the editing table, I met the director at his office in a residential building in Matunga, a leafy neighbourhood away from the bustle of Juhu and Andheri, Mumbai’s filmi suburbs.

Banerjee happens to be among the young directors who have helped shape a new, viable, independent film-making culture in India. His debut film, Khosla ka Ghosla, took years to find a distributor, but when it did, it turned out to be commercially successful. Oye Lucky! Lucky Oye! was better scripted and flawlessly executed, but disappointed at the box office because it released the same week as the 26 November terrorist attacks in Mumbai.

In LSD, Banerjee abandons the middle and lower middle class Delhi milieu which populated his earlier two films (he also grew up in Delhi) and expands his canvas to all of middle India—the ubiquitous B-town. He sounds upbeat about its prospects: “All the three films started with a big theme. Khosla ka Ghosla with a father-son relationship and generation gap, Oye Lucky...with the have and the have-nots. Here it is about the overwhelming lack of privacy in the modern world and what it is to love and be in love in this kind of a world." Banerjee says he is concerned with what “pries love". Today, it could be a text message from a greeting card company before Valentine’s Day that tells you you’re an inadequate lover, or it could be a harmless photograph of you and your girlfriend that you put up on the Internet that morphed into something else and reached millions.

The film is made up of three stories. The first is about the circumstances leading up to a widely circulated MMS involving a young girl who works as a salesperson at a supermarket or a department store in a B-town somewhere in India. The second, based on some old diploma-school film footage that Banerjee retrieved, is about a film student shooting a film and his feelings for his actress. The third is the story of an investigative journalist who is trying to revive his flagging career with a sting operation on a starlet.

After the script was written, Banerjee approached Ekta Kapoor who, he says, readily agreed to produce it. Later, when Kapoor saw the finished film, she was shocked and almost threw a fit. But once you recover from the initial shock, the film starts making sense—in my case, it kept me glued to the small screen where it played.

For the casting, Banerjee and his team went to unlikely places, finally hiring unknown professional actors for the three lead roles. The filming was done guerrilla style in real locations in Mumbai. Nikos Andritsakis, the cinematographer, painstakingly set up his camera to make the shots look real—often the camera is static in one position, while the actors’ movements are controlled so that they come within the ambit of the lens. “There was this one shot of the stardom-aspiring girl jumping into the sea. For a 5-second shot, we had to take many shots because the camera jumped along with her, filming her movements," Banerjee says.

Banerjee denies that he has been inspired by Steven Soderbergh, who invented this genre of film-making with Sex, Lies, and Videotape in 1989—in it, the character of James Spader films women talking about their sex lives. Soderbergh then made Schizopolis (1996), Traffic (2000) and more recently The Girlfriend Experience (2009), in which he repeated the format.

In that sense, Banerjee’s is not a path-breaking film. There is no real cinematic transgression. The real test lies with the audience of the 15 cities in which the film will be released. Vikram Malhotra, COO, Balaji Motion Pictures, says, “The target audience for LSD is the youth and the young at heart, people who are open to new things and ideas and getting old ideas shattered." The pre-release promotional drive has taken Banerjee to colleges across the country where he has shown the film and discussed it with students. The film’s promotional video, a snazzy, choreographed sequence of the title song Love Sex aur Dhokha, Darling, resembles a well-produced item song and entirely belies the content and look of the film.

When you have to watch a young salesgirl make love to her sly boyfriend in one corner of a supermarket, somewhere in a non-metro city, and when you have to keep watching it from the same angle for at least 30 seconds, you almost feel that it is happening in the room next to where you are. You become a willing voyeur.