Home >Mint-lounge >Business-of-life >Running with a pacer: Gain or pain?

Running with a pacer: Gain or pain?

Ahead of the Tata Mumbai Marathon, a look at whether you should run with a pacer or not

Shailja Singh Sridhar, 37, was placed first among amateur women at Kochi’s Spice Coast Marathon 2017. Two weeks later, at the Airtel Delhi Half Marathon, she turned up as a pacer for several participants aiming to achieve their target in 2 hours.

At every major race, across the world and off late in India too, organizers arrange pacers who help other runners improve their time and achieve their target.

This year, Procam International, the promoters of the Tata Mumbai Marathon to be held on 21 January, have announced 43 pacers across the full marathon (19 pacers), half marathon (20 pacers), and 10K race (four pacers). Dilip Jayaram, CEO, Procam International, says, “Pacers are selected under certain criterion—their past performance and track record in previous editions, actual race day, race route familiarity, understanding of the features of the course, the strategy and the knowledge they have of the points where participants tend to slow down or give up." Each pacer runs carrying a board with a target time and leads a group (known as a bus) that looks to finish the marathon within that time. Based on the finish time of their bus, each pacer creates their own unique strategy.

A pacer’s primary job is to help inexperienced and slower runners complete their race. Pacers help runners from making common mistakes like starting too speedily and struggling at the end or starting too slow and then be left staring at a mountain to climb in the latter half of the run. The pacer helps set an even pace, and guides his/her group through the race route traffic, aid stations, hydration stops and toilet stops. “Besides, pacers also keep the group they are leading motivated right from the time their names are announced by the organizers," says Dinesh Heda, 48, a veteran pacer and chartered accountant from Goa. “All these responsibilities make it more challenging to pace a race rather than run your own race," says Arti Daga, 38, a Mumbai-based architect who will be pacing her fourth race at the Mumbai Marathon. “Contrary to popular belief, pacing is a voluntary effort in amateur running by experienced runners who are willing to forego their personal timings for the collective benefit of the running community at large," says Bengaluru-based corporate lawyer Abhineet Awasthi, 26, who has paced the Mumbai Marathon since 2014. 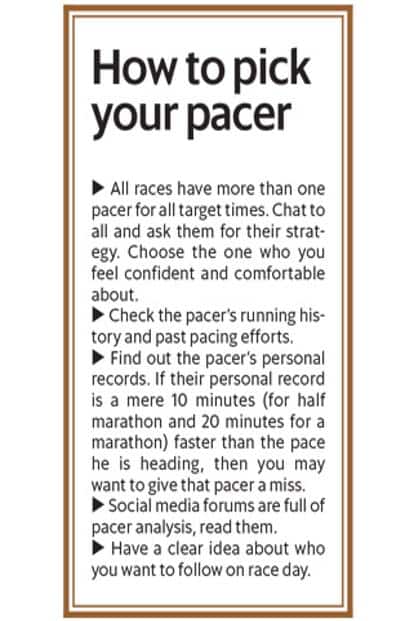 A lot of runners are keen to pace a race because, as Gurugram-based Sridhar says, it is an “extremely fulfilling experience. While running for myself and chasing my personal goals is good for my ego, helping others is rewarding in a different way. The sense of achievement and happiness I gain from the thank you’s I get after pacing is very meaningful." Heda likes pacing because helping several people achieve their personal best is the ultimate medal for him.

Running with a pacer

For new runners and those gunning for a target time, the advantages of sticking to a pacer are manifold. ¨First, following a pacer allows you to focus on form and breathing, which improves your experience and performance dramatically," says Gurugram-based Samar Shivdasani, 40, a seven-time pacer and founder of Desi Warrior, an obstacle race.

In a long-distance race, our minds have a tendency to find excuses to turn away from the goal, citing fatigue or weather, explains Awasthi. “Running with a pacer helps keep the negativity at bay. It helps the mind focus on the other parameters that can make or break a race, such as form, hydration and nutrition. Also, it is usually helpful for first-time runners to gain energy and strength from the pacing group to get past the finish line and helps keep boredom at bay," he adds. 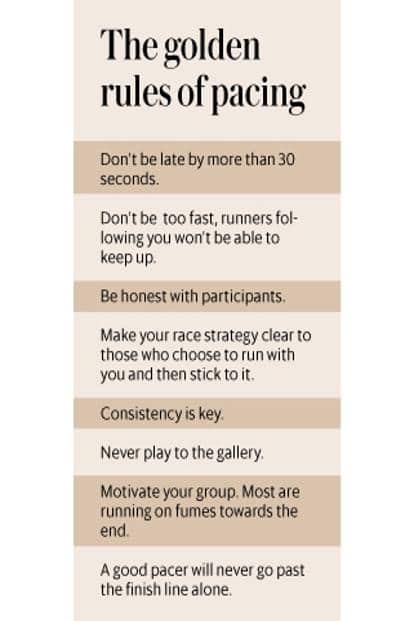 One of the key jobs of the pacer is to keep the group motivated and that plays a vital role in helping the runners press on when they hit the wall in the later stages of the race.

But there can be some drawbacks too. If a runner’s training pattern doesn’t match with the pacer’s strategy, then one could be in trouble. “My biggest fear of running with a pacer would be to have the pacer derail my natural rhythm by going out too fast or too slow at his/her will," says Awasthi.

Not all runners seek out a pacer while attempting to improve their performance. Shaibal Dutt, sales manager at Goodricke, Kolkata, doesn’t like running with pacers. “I like to run based on how I feel on race day rather than someone else setting the pace. So, going with a pacer does not work for me," says the 43-year-old.

Another reason why some don’t stick to a pacer is because they might have had a bad experience. “The big races have a policy in place, although loosely followed, but other race organizers pick anyone and everyone who volunteers with disastrous results," says Shivdasani.

If you are looking to run with a pacer this marathon season, make an informed decision, train well, have fun and run hard.

Shrenik Avlani is co-author of The Shivfit Way, a book on functional fitness.