Poorna Malavath, 16: At her peak

The youngest woman to ascend Mount Everest, she inspires the most marginalized

Within two days from now, if all goes according to plan, Poorna Malavath will be standing atop Mount Kilimanjaro with the tricolour and, doubtless, a photograph of Babasaheb Ambedkar. What will she see from up there? Park rules require all summit attempts to start at midnight so, if she makes it to Uhuru (5,895m)—or even Stella Point (5,739m), the last stop on the Machame route before the final 2-hour snowy climb—she will see the sun creep over the horizon, bathing in its first light the mountain that inspired Africa in its fight against colonialism.

What she sees is important. Because what the 16-year-old sees today will inspire India’s most marginalized to look at things anew tomorrow.

No one knows it better than Malavath herself. Two years ago, just short of her 14th birthday, she shattered so many glass ceilings that their upholders—patriarchy, casteism, misogyny, sexism, systematic poverty, majoritarianism—are still picking up the shards. In the process, she also set a world record: the youngest woman to ascend Mount Everest (8,848m).

Malavath is working with Mint photographer Hemant Mishra when I see her for the first time, crooking her arm on a ledge, crossing her feet, her poise informed by her experience with the media rather than her age. But when I come in, late and dishevelled and 30 years her senior, she turns to me, looks directly into my eyes and beams without missing a beat. This is no regular teenager, I realize.

Strangely enough, most of the press and television coverage that followed Malavath’s Everest achievement chose to focus on her ordinariness. It helped, of course, that there is absolutely no guile about her: It shows in the confidence with which she introduces her father Devidas, an agricultural labourer who now escorts her on her travels (except when she’s climbing mountains); it shows in her momentary discomfiture when we ask for the air conditioner to be switched on in her hotel room (it hadn’t occurred to her that there was none); it shows in her grace when people much older and much younger line up to be photographed with her and ask intrusive, personal questions.

But do not be fooled: Poorna Malavath is no girl next door. 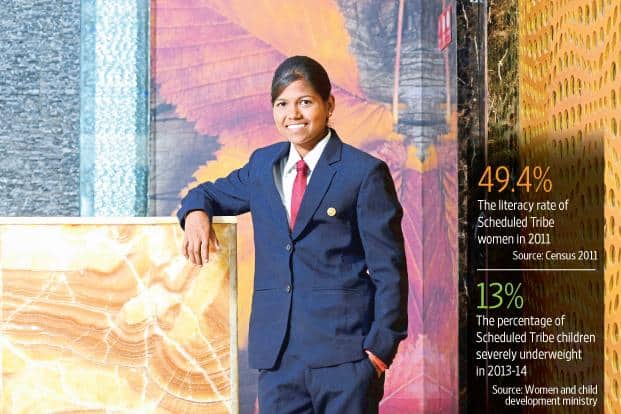 “I first noticed Poorna during her rock-climbing training at Bhongir, in Nalgonda district," says R.S. Praveen Kumar, a police officer and secretary, Telangana Social Welfare Residential Educational Institutions Society, on a Skype chat from Hyderabad. “She was very dexterous and the ease with which she could negotiate the rocks without any support really impressed me. See, these are children who come from agricultural backgrounds, they have worked on farms and their hands are tough, which gives them an advantage in physical activities."

Kumar would know: Born in the Nallamala forests of undivided Andhra Pradesh, he is a proud product of the Andhra Pradesh Social Welfare Residential Educational Institutions Society (APSWREIS) system himself. Joining the Indian Police Service after his third attempt at the UPSC exams in 1995, Kumar took a sabbatical in 2011 and went to Harvard University in the US on a fellowship for a postgraduate degree in public administration. On his return to Hyderabad, he sought a posting with APSWREIS, determined to overhaul the system set up in 1984 for the education of Scheduled Caste/Tribe and backward class children. Now in his fifth year as secretary (for undivided Andhra Pradesh and now Telengana)—his predecessors averaged a tenure of six months—Kumar introduced an adventure activities programme in 2013. Malavath, then 13, and her Everest teammate, Sadhanapally Anand Kumar, then 15, were two of the 110 APSWREIS students whose parents allowed them to go on the rock-climbing course.

“Poorna was one of the only two girls among 30 to finish with an A+ grade," says Shekhar Babu Bachinepally, one of the first Indians to climb Everest as an individual in 2007. He oversees the courses at Bhongir. “She was hard-working and a very good team player, not just listening to instructions but intelligently internalizing them."

Kumar then decided to send the top 20 finishers for a 20-day course at the Himalayan Mountaineering Institute, Darjeeling; they repaid him by becoming the youngest team to summit Renock peak (4,880m) in the Kanchenjunga range. “That’s when we decided to push them a little harder: We took five of them to Ladakh in the depths of the 2013-14 winter and they survived the minus 30 degrees Celsius. We came back and that’s when I told the chief minister that we had to attempt Everest."

Photo shoot done, we retire to Malavath’s room, with the 16-year-old taking the stairs two at a time. We switch between English and Hindi—the latter is similar to her mother tongue, Banjari, which has no script or recorded history—and many of her responses seem rehearsed; an outcome, no doubt, of the media going over the same ground again and again.

To cut them some slack, it is a story that stretches credulity. “I come from Pakala, a village so remote, the nearest shop is 7km away," says Malavath. “I studied there till class V, then I sat for an entrance examination and joined the APSWREIS the next year. My brother studied in an Andhra Pradesh Tribal Welfare Residential Educational Institutions Society school, now he’s in his BTech final year. My parents are not educated, so they were keen that we study. Alongside studies, I was interested in sports, playing kabaddi and volleyball and taking part in athletics."

At times, though, her hands fly to her throat, her eyes grow wider and her emotions are so palpable that their trigger could be in the next room, instead of on a mountain peak 2,000km away.

“It was 5.45 in the morning when I saw the first dead body," she says, her voice faltering for the first time. “Just before that, I had suffered a spell of dizziness, because my oxygen cylinder had run out. I had wanted to sit, but there was no place; the only way was up. Once the oxygen was replaced, I immediately felt better but the sight of the dead body made me shiver, and for the first time I thought, what if something similar happens to me?"

For all the hard training the 13-year-old had received, for all the skill and strength and talent she had demonstrated at mountaineering, for all the summiting videos Bachinepally had directed her to watch to ensure there were no surprises during the actual climb, nothing had quite prepared Malavath for her first encounter with mortality. Back home, when her mother Lakshmi had broken down at the prospect of her daughter travelling so far away, it had been Malavath who had convinced her to let her go. Suddenly, she was face-to-face with her mother’s deepest fears—and they became her own.

“I was scared but I didn’t lose my confidence," she insists. “I asked Sherpa sir, but why is it abandoned here? He said climbers barely had enough energy to haul themselves back down, how could they carry a corpse? I only wondered about the parents, wouldn’t they be waiting for their son to return...

“But I didn’t tell Sherpa sir anything about feeling scared. Instead, I remembered my SWAEROES (as social welfare system students are called), my teachers, my parents, Secretary sir.... I wanted to be successful for them. And so I went on and, 15 minutes later, I was on top of Everest."

A million factors came together for Malavath’s success but—and this cannot be emphasized enough—neither her underprivileged status nor her enabling army were there on Everest on the morning of 25 May 2014. It’s hard to articulate exactly what that means for India’s 200-odd million Dalit population but, two years down the line, says Kumar, the Poorna effect has been “the most obvious in the drop in the number of girls who used to get married right after class XII; we’re seeing more and more of them move into higher education and careers. Now every school I visit, children—boys and girls—tell me they want to be a Poorna in their own fields."

There has been criticism of the wisdom of allowing a 13-year-old to attempt the highest (though not the most difficult) peak in the world—indeed, an age bar in Nepal forced Malavath’s team to take the route up from China—and indie actor Rahul Bose, whose biopic Poorna releases in November, for one, believes that by conventional parameters, “she should’ve never made it this far".

“She’s poor, she’s an Adivasi, she’s a girl.... It’s incredible that a 13-year-old could survive what she did. Hers is a monumental story of empowerment and endurance," says Bose, who plays Kumar in the film. “Poorna is a very textured look at her life."

Bose is dismissive of the social impact of cinema but Kumar has high hopes of her talismanic appeal. The girl who could change the world, meanwhile, appears least concerned about her iconic position: After Kilimanjaro, she will be focusing on clearing her class XII exams and becoming an IPS officer “like Secretary sir".

Because icons, too, need inspiration.