Mumbai to Nashik: On the vine trail

Exploring a winery, and watching the sun rise

Planning a short weekend trip that will meet the demands of both beach and mountain lovers can be a demanding task. After spending considerable time on destination disagreements, I put the argument to rest with wine. No one could refuse the prospect of starting and ending the day with a glass of wine.

It was going to be Sula Vineyards in Nashik, India’s wine capital. Nashik is an easy 3-hour drive from Mumbai, so my friends and I decided to club it with a cave exploration.

Gulmohur Homestay, a family guest house built on a 7-acre plot, proved to be the ideal accommodation. Trees laden with fruits, flowers in bloom and lush green lawns made for a lovely backdrop to the house. After a quick tour of our rooms and a cup of herbal tea, we headed straight to Sula Vineyards, a homegrown winery set up in 2000.

Though a number of vineyards have sprung up in Maharashtra over the last decade, the term “wine tourism" was added to the Indian traveller’s lexicon by the winery. 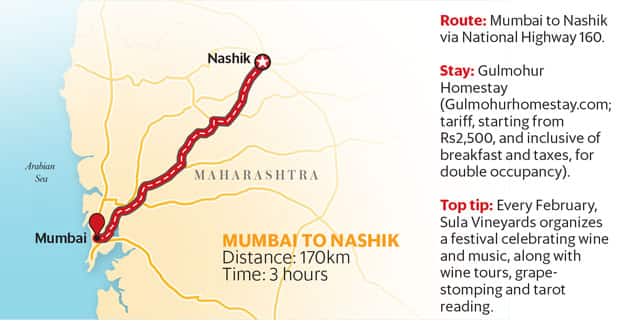 First on our agenda was a tour, a daily feature of the winery. Our guide Ajay escorted us to the grapevines, explaining the workings of a plantation and how wines are christened. He mused on how black grapes make for big bold reds, while the green ones are more suitable for delicate white wines. We got acquainted with the origins of wine, the history of Sula, and the pungent smell of fermenting grapes as we walked through the production unit.

Usually, looking at menus that groan with glorious descriptions about pairings and the vibrancy of wines, leaves my culinary-challenged brain thoroughly confused. I hoped our 2-hour lesson would change that.

It was finally time to taste. We entered a sprawling bar overlooking a lake, and settled down at the wooden tables as the aproned sommelier lined up several bottles—Chenin Blanc, Sauvignon Blanc, Cabernet Sauvignon and Shiraz.

Amid the profusion of aromas and conversation, we did not notice the sun’s rays begin to slant. In high spirits by the time we did, we moved to the open-air restaurant next to the tasting room for some more wine, wood-fired pizza and jazz to end the day.

The next morning, we set out to witness the sunrise from Trirashmi Hill, 18km from our home-stay. It was a half-hour drive to the bottom of the hill. Another 20 minutes later, well-marked stone-cut steps led us to the Trirashmi Caves (also known as Pandavleni) on top.

These 24 Hinayana Buddhism caves, which are believed to have been carved between second century BC and fifth century AD, are said to have been gifted by the king, local merchants and citizens to the Buddhist monks who used them as viharas (monasteries) to meditate.

There were big rock-cut chambers with sculptures of Hindu deities and Buddhist monks; and beautiful inscriptions in Sanskrit. The ancient water channels are particularly impressive. Rocks had been cut carefully to channel the flow of rainwater to storage tanks, also made of rock.

We watched the first golden rays of the sun stir the sleepy surroundings. A sign explained the meaning of the word tiranhu—rays of sunlight that emerge from the caves.

We had ample time to go back to the home-stay and unwind before heading back to Mumbai. We couldn’t agree on the time we should leave. I suggested we discuss this over a last glass of wine. There couldn’t have been a better way to get consensus.

Weekend Vacations offers suggestions on getaways that allow for short breaks from metros. The author tweets from @feetonthemap.