Siddharth Moudgil was 35 when he decided to turn over a new leaf. A banker based in Hong Kong, Moudgil’s high-pressure job made it impossible for him complete any diet plan he signed up for. Then in January 2008 he decided to apply the SMART (Specific, Measurable, Achievable, Realistic and Time-bound) strategy to his diet plans. This approach, part of the Management by Objectives (MBO) theory drawn up by Peter Drucker in his 1954 book The Practice of Management, is a strategy used to set goals in business. Moudgil, 38 now, was able to apply these rules to his diet plan, and define objectives based on them.

PM rules:Start a diet at night, instead of in the morning.

Most of us fall into the trap of following other people’s diets. But what works for them won’t necessarily work for you. You need a diet plan that is specific to you. “Health is personal and is determined by your metabolism, genetics, medical history and hormones," says Ishi Khosla, clinical nutritionist and director, Whole Foods, New Delhi.

Before you start planning the future, magnify your present. Awareness is the first step towards realization; hence a diet diary, when kept honestly, is like looking into the mirror for the first time. It’s only through a diet diary that you can correctly keep track of the loose cannons in your routine. Says Dr Sharma, “Most people think they eat healthy, but when you scan their diaries you can easily spot ignored binges like a 4pm biscuit break." Once identified, eliminate all bad habits to make room for a new, tailor-made routine.

When it comes to weight loss, Dr Sharma draws the line at 1kg each week. “Most people are misguided into believing that you can lose 2kg a week, but that’s an extreme figure," she says.

To get more transparency about the kind of weight (whether it’s actual fat or just water) you’re losing, Dr Agarwal suggests using weighing scales with body fat analysers (available at certain gyms), which help determine the amount of fat versus water retained in the body. She says, “While it’s perfectly all right to weigh yourself once a week, you can do it every day if you want to spot culprits that cause the bloat."

When Reeti Sahai, 28, an advertising executive in Delhi, weighed herself every day, she was surprised to find that she was 1kg heavier in the evenings. She started to monitor her diet habits and realized that it was the extra seasoning in her salad at lunch that was leading to high water retention in the evening.

That said, it’s important not to get addicted to numbers as weight-loss has a tendency to fluctuate over time.

We’ve all heard the dictum “Eat breakfast like a king, lunch like a prince and dinner like a pauper". Starting a diet at breakfast, then, could be detrimental to achieving your target. Since dinner issupposed to be the lightest meal, Dr Sharma recommends starting any diet at night instead of in the morning to make it more achievable. 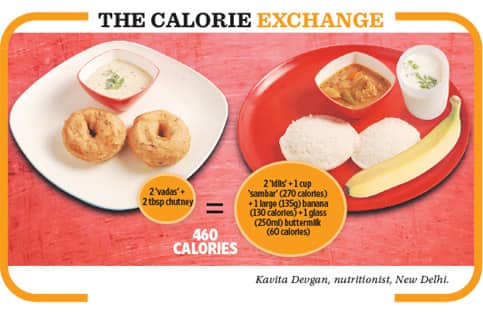 In addition, she suggests a strict 3- to 4-hour break between all meals. “The stomach empties itself every 3 hours, therefore not eating for long periods results in a sugar dip that makes you crave sugary foods," she suggests.

Completely cutting out indulgences makes a diet unrealistic. As Sharma says, “You can’t go cold-turkey on food." And you don’t have to. Dr Agarwal recommends two Bourbon biscuits in the evening unless you have high blood sugar or cholesterol problems. “The combination of biscuit and chocolate works wonders to satisfy cravings," she says. You can even customize your favourite foods, just as Mumbai-based foodie and investment banker Amit Randhawa, 34, does. “To satisfy my sweet tooth, I drizzle chocolate sauce on fruits or reach for dates instead of a cheesecake," says Randhawa.

While most components of a diet are time-bound, others involve a more permanent change in lifestyle. “Stick to a diet for three months, followed by a controlled, month-long break," says Dr Agarwal. During the course of your diet, the main objective should be to build sustainable healthy habits.

Dr Sharma cites the example of a client who lost 12kg in 18 months. “It’s been many years since her diet plan but she hasn’t put on even a kilo ever since," she adds. Evidently, spacing out your diet plan over a longer period makes it less spartan and more viable.

At the end of the day, diets are not about deprivation, just like health isn’t just about weight. By applying the SMART method to your plan you can maximize your ever-elusive diet without giving up the simple pleasures in life.