Greek mythology describes the Furies as vengeful deities who pursued victims to a painful end. They represent elemental forces of destruction that cannot be contained until the act is over. Modern history is replete with examples of such destruction that one is forced to believe that the Furies are not mere literary tropes for writers.

Journalist Nisid Hajari recounts a well-known and terrible example from South Asia that continues to cast its shadow even today. In Midnight’s Furies: The Deadly Legacy Of India’s Partition, he gives an account of the period between August 1947 and December 1949. The two points marked the start of violence in South Asia in the wake of the partition of India and a ceasefire in Jammu and Kashmir (J&K). Between those two dates, millions lost their homes, friends, livelihoods and lives. The catalogue of blame for the events that took place in those years continues to be disputed. Hindus and Sikhs blame Muslims; India blames Pakistan and an equal amount of blame, if not more, is levelled against India itself by Pakistan. It is a matter of record that no community comes out clean in the massacres and horrible acts of violence—against men, women and children—in the span of a few months. 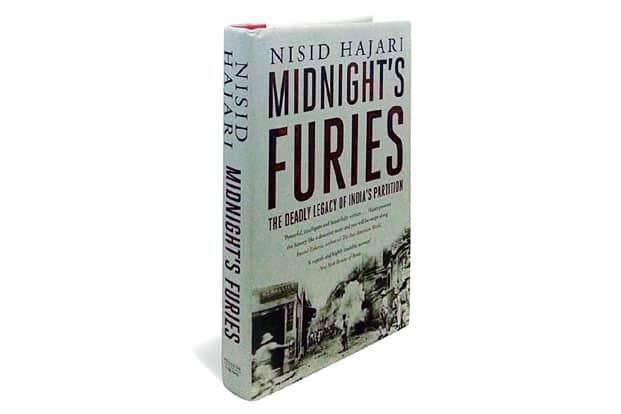 Here, the author’s narrative diverges. A careful reading of what Jinnah was up to in the few fateful months beginning August has tarred his record beyond repair. If Gandhi and Nehru did not anticipate the scale of violence between Hindus and Muslims, they made amends in the years that followed. Nehru chose to make India as secular as he could and Gandhi paid for it with his life. Jinnah’s case was different: His country rested on religious foundations that only had a weak link to territorial reality. Now, nearly 70 years after Partition, the ruinous course that Jinnah chose in the months after independence continues to plague his nation. India has moved on but the mistakes of that age continue to haunt Pakistan.

Much of this becomes clear on reading the last third of the book. In the chapter on the origins of the war in J&K, Hajari carefully retraces the mistakes that Jinnah made before and after India obtained the instrument of accession from the last ruler of the state. In the decades that followed, Pakistan has portrayed itself as the victim of Indian machinations to obtain J&K’s accession by “force and fraud". This, as Hajari and others before him have shown, is a myth.

Both sides made preparations for ensuring that J&K joined them. Pakistan fired the first shots when it began arming tribal raiders from the North-West Frontier Province (NWFP) in early October 1947. The governor of the province, George Cunningham, knew what was happening.

Was Jinnah aware of what was going on? Historians have for long denied that he had any knowledge of the raid into J&K. In Midnight’s Furies, there is a moment on 10 October 1947—16 days before India dispatched its first soldiers to the valley—when Iskandar Mirza, Pakistan’s defence secretary, tries to brief Jinnah. Before any details can be presented, the Great Leader (Quaid-i-Azam) interrupts and says, “Don’t tell me anything about it…my conscience must be clear" (page 184). This was plausible deniability, well before the term was invented by Hollywood.

That, however, was not the end of it: Duplicity was compounded with delusion. When he was informed of the Indian airlift of troops to Srinagar on 26 October 1947, Jinnah said he was “free to take any course in Kashmir". This was a good 16 days after he got to know about the raid into J&K. More was to follow.

On 1 November, five days after the Indian airlift, India itself offered a way out to him, one that could have saved him a lot of trouble. On that day, India’s first governor general, Lord Mountbatten offered a “package deal" to Jinnah: plebiscite in all three states where accession was disputed. These were Junagadh, Hyderabad and J&K. Jinnah rejected this out of hand. His objection? He did not want Hyderabad to be forced into a plebiscite.

At the time, the nizam had dreams of being independent, an idea that Jinnah fanned, to the destruction of the nizam and the existence of Hyderabad as an independent state.

The mark of a statesman lies in his appreciating the constraints and realities in which he is to work. Reading Hajari’s book makes one feel that Jinnah lacked this quality, one that was so essential for the survival of the country that he founded. He secured a compact territorial unit on which his nation could have prospered. True, J&K was disputed, but had he chosen the path of negotiation and plebiscite, he could have got Kashmir too. Partisans of Pakistan’s cause continue to say that in a fair plebiscite, Kashmiris will desert India. When it was on offer, it was spurned; when the offer expired, its revival has been sought.

Jinnah’s mistake lay in his efforts to change the map of South Asia after it had been settled. His approval of the raid into J&K, his encouragement to the nizam to dream of something that was impossible, and his lack of appreciation for the quasi-nationalist sentiment in East Pakistan, is proof that this great lawyer had a poor appreciation of the geopolitical realities that lie behind nation states. That ruinous course is now embedded in the DNA of his country.

In the epilogue to his book, Hajari makes some interesting extrapolations from these foundational troubles. He cites the experiences of American journalist Phillips Talbot, who visited Pakistan and India one year after the ceasefire was signed. It is worth quoting: “The notion that had seized Jinnah and his citizens within weeks of independence, however—the sense that India hoped to ‘strangle’ its sister dominion—had congealed into an idée fixe. Talbot heard it not only from Pakistan’s top leaders but from ‘petty officials, university instructors, businessmen, and—in simple form—even taxi drivers, cycle-rickshaw peddlers, and refugee hawkers.’" That myth—that India wants to strangle Pakistan—continues to have currency even today. And perhaps it is time to acknowledge that mistaken feeling as the root of much that has gone wrong with Pakistan.