Be smart about your smartphone

Be smart about your smartphone

“Smartphones are like children," says Satchit Gayakwad, spokesperson, Research in Motion (RIM), the makers of BlackBerry. “You need to provide yours with lots of tender love and care."

If you don’t understand how the device works, chances are you will not be able to make the most of it without making midnight calls to smirking service centre executives. Here are three ways to keep your phone in good condition and off the service centre table.

“The most common complaint in a smartphone is battery draining and that the software OS (operating system) hangs," says Natesh. In a month, Natesh and his team test 200-300 handsets. “Forty per cent out of these are in warranty and on our table for mishandling," he says.

“Many people leave Bluetooth running even though they aren’t using it. Ditto with GPS, Wi-Fi and 3G," says Atul Chitnis, a consulting technologist who is an expert in hand-held computing. These are power-hungry features and can eat up a significant amount of battery power over the course of the day. You should keep them disabled and use them only when you need to, like when you are transferring files or using the Net. “Also, don’t cover the antenna with your fingers. This causes the phone to work harder trying to maintain a signal, which causes faster battery drain," he adds. 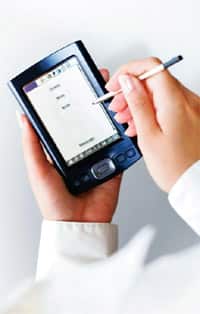 When you browse the Internet on a smartphone, websites rich with multimedia such as flash animation and pictures consume more battery and make the download slower. You should simply set your browser option for text-only. Another common reason for battery leaks is constant updates of your email andsocial networking applications. “You need to know immediately you’ve got mail," says Gayakwad, “but other than that, your social service networks don’t need to constantly search for updates."

Third-party applications for social networking sites such as Twitter, Facebook, LinkedIn, MSN, Gmail and Gtalk constantly retrieve data from the Internet. These can be set to have refresh timelines of 20 minutes to an hour. This way, there’s no constant search for data by your phone on these sites and that can help save a lot of battery. Then there are applications such as weather updates which run in the background even when you’re not using them and can use up your battery life. Uninstall these apps. You can always reinstall them if you decide you need them at a later date. Applications such as complex games, flash-based applications which use up a lot of memory and CPU to play, also drain battery.

You need to use a cover and a screen protector for your phone. “If you use unclean or wet hands to use the touch panel of your phone, it will start giving problems, like not responding to your touch," says Natesh. He advises the use of stylus on a touch screen. Regularly clean the exterior with a soft microfibre cloth to get the fingerprints off the screen and body. “Oh, and never vacuum the phone," Gayakwad adds.

In case your mobile is exposed to water or falls into water, remove the battery immediately. “Never try to turn it on as that will short-circuit all its innards," explains Gayakwad. Use tissue or cloth and delicately wipe off the moisture. “The easiest way of drying a phone is by putting it into a bowlful of uncooked rice. Rice absorbs moisture and makes the phone dry," he adds. After it has dried, take it to the service centre. Service centres have special devices to dry your phone and make it functional again.

Smartphones are embedded with tiny, complicated electronic materials which are heat sensitive, so do not expose them to extreme heat, such as the dashboard of a car. “Heated phone also causes greater battery drain," says Chitnis. So avoid extreme climates for your phone. In case it heats up, you need to give the phone battery some rest by switching it off for a while.

Like computers, smartphones are actually mini computers and are increasingly becoming susceptible to viruses and malware. There are two ways by which they get affected by viruses and other malware, says Chitnis. “If you leave the Bluetooth on and visible and a nearby phone is infected, your phone will be infected too. Second, is to recklessly install applications from unknown sources," he says. iPhones have centralized application repositories or App Stores, which provide certified applications with some level of protection, tested to some degree.

Malicious software and viruses attack your gadget by destroying saved files, applications, and special programs for proper phone operation. It can also make your phone non-functional by creating a loop and causing system failure. So make sure that you open files and documents from trusted sources only. Thensecure your Bluetooth and install a good antivirus software such as Norton Smartphone Security in your smartphone. Also, keep taking regular backups of your data as you would in your laptop, in case your OS crashes and needs to be reinstalled.

• Use keyboard short cuts rather than browsing through the apps

• Reduce the screen brightness. Set it to 50% or less

• Reduce the resolution of your LCD

• Don’t use speakerphones, use headphones instead

• Keep the volume to the left, from medium to low

• Keep the keypad and track-ball tones off

• Turn off unused connections when not in use, for instance, GPS, Wi-Fi and Bluetooth

• Keep the battery at room temperature as often as possible

• If the phone battery is low, put the phone in “airplane mode". This will turn off all network capabilities