"storyDirectUrl"
OPEN APP
Home / Opinion / What’s love got to do with it?

What’s love got to do with it?

The 26 June judgement that legalizes same-sex marriage in the US should be seen as a restoration of rights the state owes its people, not a victory for love or the profundity of marriage

Love is in the air. Ever since 26 June, when a posse of media interns, running harder than they ever had in their lives, relayed the news from inside the US Supreme Court to media channels and journalists waiting outside its gates to know whether—and how many—justices agreed with, among other things, James Obergefell’s plea that he be recognized as the widower of John Arthur, his partner of 21 years who died of ALS (amyotrophic lateral sclerosis), and that his name be written into Arthur’s death certificate, love has bloomed on every newsfeed and timeline, display pictures and cover pictures. 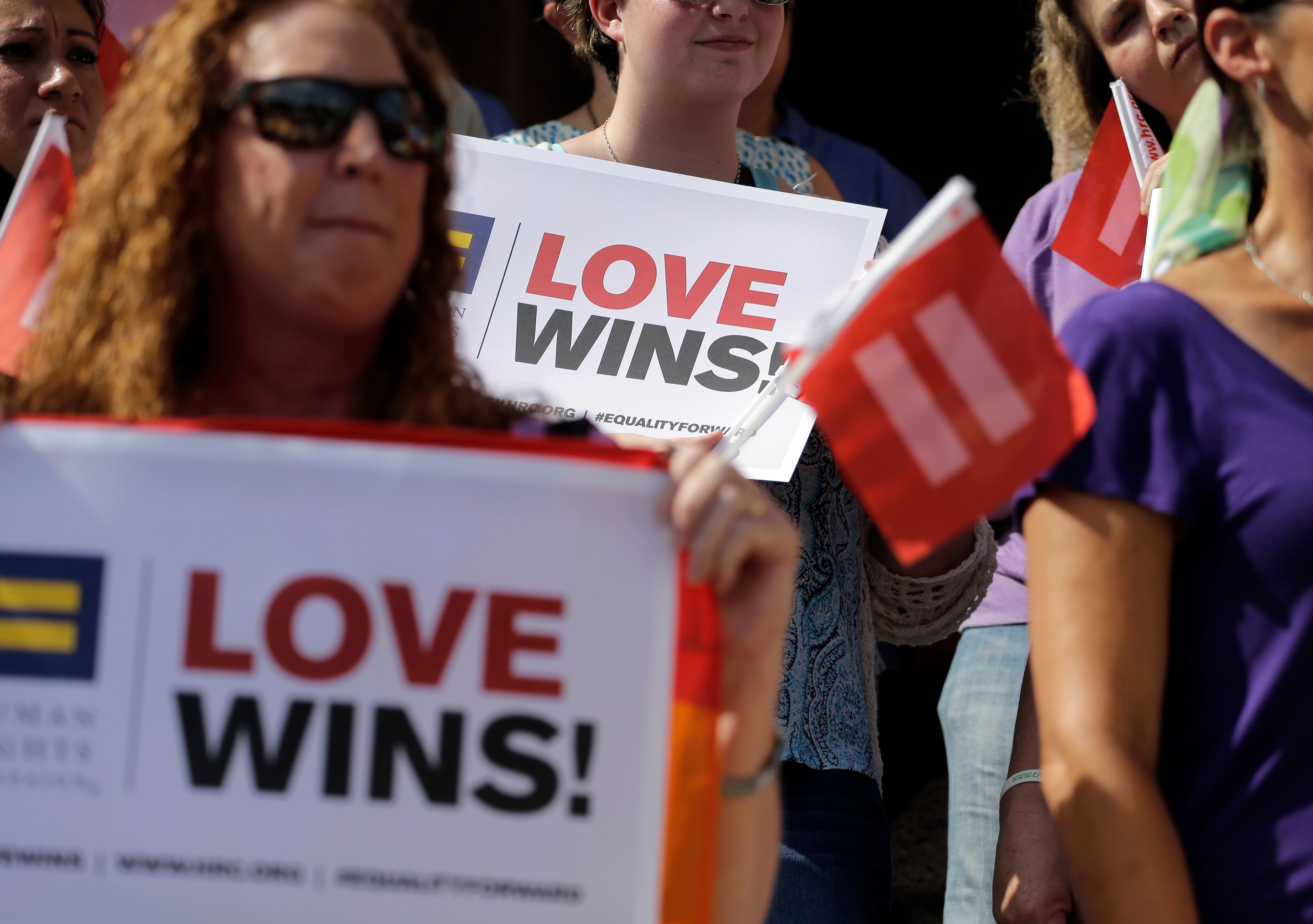 Writing about the Obergefell versus Hodges judgement, editorials widely invoked a ruling, also made on a June day, long long ago. In that case, Richard Loving and Mildred Jeter, like Obergefell and Arthur, were in love. Except Loving was a white man and Jeter a black, native Indian woman, and it was 1967 in the state of Virginia. Their love was interracial, therefore illegal. The US Supreme Court changed that, striking down the state’s Racial Integrity Act, along with anti-miscegenation laws in 15 other states. The New Yorker called 26 June’s judgement the “modern analogue" of Loving vs Virginia.

In that case, the court concluded that “there is patently no legitimate overriding purpose independent of invidious racial discrimination which justifies this classification. The fact that Virginia prohibits only interracial marriages involving white persons demonstrates that the racial classifications must stand on their own justification, as measures designed to maintain white supremacy."

In the case of Loving, as in the case of Obergefell, the ruling is first and foremost about anti-discrimination and equal rights, love or no love. Justices Antonin Scalia, Samuel Alito, Clarence Thomas and John Roberts’ sullen, almost churlish, dissenting opinions attacking the Opinion of the court delivered by justice Anthony Kennedy on grounds ranging from overreach of the judiciary to the vilification of those who disagree, are all answered by a single, simple argument: It is a fundamental right enshrined in the US constitution. Drawing upon the 14th Amendment, Kennedy points out that the right of same-sex couples to marry is derived from the amendment’s “guarantee of equal protection" and cites precedents to say that the court has historically always recognized “unjustified inequality within fundamental institutions that once passed unnoticed and unchallenged" and “invoked equal protection principles", thus confirming the “relation between liberty and equality"

In the whole text of the Opinion, “rights" is mentioned 86 times, “love" nine times. His concluding paragraph, which was described by Amy Davidson in the New Yorker as a “manifesto" for marriage and gave the rainbow filters and love hashtags a run for their virality, reads:

“No union is more profound than marriage, for it embodies the highest ideals of love, fidelity, devotion, sacrifice, and family. In forming a marital union, two people become something greater than once they were. As some of the petitioners in these cases demonstrate, marriage embodies a love that may endure even past death. It would misunderstand these men and women to say they disrespect the idea of marriage. Their plea is that they do respect it, respect it so deeply that they seek to find its fulfilment for themselves. Their hope is not to be condemned to live in loneliness, excluded from one of civilization’s oldest institutions. They ask for equal dignity in the eyes of the law. The Constitution grants them that right. The judgment of the Court of Appeals for the Sixth Circuit is reversed."

It is so ordered.

This is a bit much. There are many gay rights activists, and many more gays and lesbians whose involvement with their sexuality is restricted to practising it, who would not subscribe to these views.

For this, Kennedy’s decision has been characterized in some quarters as conservative. It has been attacked by those who rail against marriage as a symbol of heteronormative hegemonies and think it perpetuates deep-seated patriarchal structures within our society, and somehow “de-queers" an otherwise radical, anti-conservative, all-inclusive, fluid spirit that stands in solidarity with all movements resisting the marginalization of minorities.

But it needed to be that. In the US, for a while now, there has been more than a fair degree of acceptance towards homosexuality, of homosexual partnerships, of domestic partnerships, of civil unions. It is only this specific brand of partnership called “marriage" that white evangelical/protestant America has a problem with, a deeply nuanced feeling that not many outside the structures of that particular theology can fully understand.

And so, “Love is Love" and “Marriage Equality" is the fig leaf that must be put on a battle that is essentially simply about equal rights and anti-discrimination, marriage or no marriage. In India, when we see Americans exult at marriage equality, we think that that is the end point of our own battle to decriminalize homosexuality. Suddenly, to not be criminalized for same-sex relations, i.e., to have the freedom to love, begins to equal same-sex marriage and therefore love = marriage and could I also have a side of my rights please.

Besides Obergefell and Arthur, the Opinion also tells us the story of April DeBoer and Jayne Rowse, two women in Michigan who love each other, live together, and have adopted three children, two of them with special needs. Under state laws, only opposite-sex married couples, or single individuals can adopt, so each child can have only one woman as his or her legal parent. As Justice Kennedy points out, “If an emergency were to arise, schools and hospitals may treat the three children as if they had only one parent". And if either DeBoer or Rowse died, the other would have no legal rights over the children she had not been permitted to adopt.

It then tells us about Army Reserve Sergeant Ijpe DeKoe, who married his childhood sweetheart Thomas Kostura in New York before leaving for tour of duty to Afghanistan. When he returned they both settled in Tennessee, where DeKoe works full-time for the Army Reserve. “Their lawful marriage is stripped from them whenever they reside in Tennessee, returning and disappearing as they travel across state lines. DeKoe, who served this Nation to preserve the freedom the constitution protects, must endure substantial burden." Valeria Tanco and SophyJesty, also listed as petitioners, faced a similar situation as they moved from New York, where they married, to Tennessee, where they found themselves unmarried once again. And in Kentucky, Gregory Bourke and Michael DeLeon, who got married in Canada, challenged the state for not recognizing their legal relation.

In the flood of stories leading up to the judgement, I read about Bill Novak and Norman MacArthur, who are both in their 70s now, and have been together for 50 years. When they moved from New York City, where they were registered as domestic partners, to Pennsylvania, which didn’t recognize such a partnership, they were rendered “legal strangers" overnight. Their love was intact but what they lost were their rights. And so Novak adopted MacArthur as his son. They were declared “father and son", and got several of those very rights back, because, now they were in a legally recognized family unit. After Pennsylvania changed the statutes last year to allow same-sex marriage, they applied to vacate their adoption and get a marriage licence. They will marry later this year.

I call the love/marriage rhetoric the Shikhandi-shield, like in the Mahabharat. Talk about rights and it’s all a bit too strident, too threatening, too much of a crusade. Speak the language of love, dress it up in a rainbow, throw up some confetti and wear a pink afro and it is almost palatable. What if Obergefell and Arthur had fallen out of love in their last years together; what if DeBoer and Rowse never thought marriage profound, caring only about the safety of their children; what if DeKoe and Kostura were just plain annoyed at their constantly changing marital status. What if, like millions and scores of marriages the world over, it is simply a practical piece of paper that lets everyone carry on with their lives with a degree of security and certainty.

Fact is, love doesn’t need a Supreme Court judgement to win—not in the US, not in India, not anywhere. #Lovewins everyday. It is our rights that we need to fight for and win.