I am doing something I haven’t done in a long time: asking a perfect stranger out to a nightclub in a strange city. Now that I have your attention, let me tell you that this piece is about music, not blind dates. His name is Prasanna Singh, and I found him online. He writes a blog called Musings of A Manic Manipuri Metalhead, in which he discusses the music scene of Kolkata with headers such as “The PIT v.5—Rising Fists". I stumbled on his blog when I did a search on “Rock Music Kolkata".

For a music lover, Kolkata offers a fork. You can walk down the path of Shastriya Sangeet and Rabindra Sangeet, or you can savour its regional take on Western music. Bands such as Fossils, Cactus and Bhoomi blend a love of rock with a distinct local beat and look—like the bright kurtas worn by Bhoomi. Bengali friends in Singapore and New York would play their music, both out of nostalgia and a desire to appear cool. 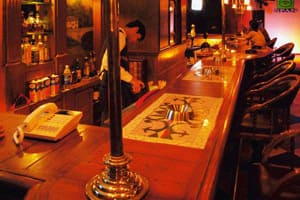 Atmosphere in spades: The Someplace Else bar is just the right degree of uncomfortable.

I said as much to Singh in my email, and later on phone. We got talking. He laid out the music landscape of the city: who the bands were and what their style was. After a while, we got down to nitty-gritty. I was going to be in Kolkata mid-week, I said. Was there any place where I could hear local bands play live? Perhaps I could tag along if he was going club-hopping with his friends? And that, my friends, is how it is done. That’s how you ask a perfect stranger out to a nightclub.

After a pause, he said, “Well, if you want to hear live music, you should go to someplace else."

“Sorry. Which place else?"

“Someplace Else. It’s the only place in Cal that has live music every day of the week."

So it came to be that I found myself on a Tuesday night at a cozy lounge bar called Someplace Else, listening to Krosswindz take their devoted but small audience to a musical high. They didn’t play original music that night, but they played popular rock songs with passion and interpretational integrity. Singh stood me up. Well, not really. We were to meet on a Wednesday, but the government declared it a dry day so I was on my own on Tuesday.

Most people go to bars for three things: great atmosphere, live acts and perfectly mixed drinks. Atmosphere has to do with age, coziness and a certain non-intimidating comfort. Wooden floors are an advantage, particularly those discoloured by cigarette butts and spilt drinks. The place has to reek of music and moods, lovers’ quarrels and sweet nothings. It has to “play it" like Casablanca—the movie, not the place. You know what I mean?

The Village Vanguard in New York has this nebulous construct called atmosphere in spades; as do many of the bars on Bourbon Street, New Orleans. They have human proportions. Bangalore’s B-Flat is fairly large, but uses oversize sofas to make the space seem smaller. Blue Frog in Mumbai, on the other hand, is too big and self-consciously stylish for me. It isn’t uncomfortable enough. You know those smoky, catastrophic places that smell bad but somehow persuade you to get drunk enough to dance on the table? Blue Frog makes you stand up straighter and tuck your stomach in.

Someplace Else is cozy and dark. It has uncomfortable bar stools that jiggle when you crane your neck to watch the old-timers hum to the songs. Over dinner, Jayanta Dasgupta, who transforms from a suburban Dad to the smoky voiced, grinning lead guitarist for The Saturday Night Blues band, recounted an evening when his band was playing at Someplace Else. An American man stood right in front. “He was fanning my guitar and I was like, ‘Dude, what you doin’, man? Get off me,’ and the American guy says, ‘You guys are smokin’, man. I am just cooling you down.’" Dasgupta laughed. He reminded me of Peter Pan.

After midnight, I followed the band members of Krosswindz up to the coffee shop at The Park hotel, where they were having pizza. Lead guitarist “Tuki-da", or Vikramjit Banerjee, told me stories about the Kolkata greats: Usha Uthup, Louiz Banks, Nondon Bagchi, Bertie D’Silva and others. He estimates that Kolkata has about 5,000 informal bands, 80% of whom play in Bangla. “Bengalis like to express themselves," he said. “Instead of eve teasing, we compose music."

If what he says is true, Bengali women are lucky indeed.

Two days ago, at a Bangalore book party for my cousin, C.Y. Gopinath, I listened to a roomful of musicians play the blues—Radha Thomas, Ramjee Chandran, the legendary Suresh Shotam, Aman Mahajan and Chandran Sankaran. Call me biased, but if Kolkata is where the music scene is happening now, and Bangalore is the past or the future, depending on whom you ask, my hometown Chennai is where it all began. A disproportionate number of musicians, including the late genius, Dilip Balakrishnan, and every single musician in that Cooke Town home, save Mahajan, could trace their roots to that humid city so suffused with music. Visit it during the upcoming December season and see for yourself.

Shoba Narayan took Prasanna Singh’s permission before writing about him. Singh is engaged to a Manipuri girl and works in IT. Write to her at thegoodlife@livemint.com