The currency of ‘jugaad’

The Hindi slang for something ingenious and improvised, jugaad is a term being used increasingly by economists the world over. In these times of austerity measures, when expensive R&D departments are taking a hit, the Indian jugaad philosophy is travelling westwards and beginning to make sense in a competitive world. Scarcity is the mother of invention, authors Navi Radjou, Jaideep Prabhu and Simone Ahuja suggest in their book Jugaad Innovation. How large companies can tap into the technique of being frugal and flexible and generate breakthrough ideas, is the premise of the book. Radjou, originally from Puducherry, is an innovation and leadership strategist based in Silicon Valley, US, and a fellow at the Judge Business School, University of Cambridge, UK. In 2008, he published a 10-part report (for Forrester Research in Boston) titled India: The Innovation Giant (Re)Awakens, exploring the innovative business models pioneered by large corporations and grass-roots entrepreneurs. He was previously a consultant with Ernst & Young, GM, Hitachi and IBM.

Prabhu, director of the Centre for India and Global Business at the Judge Business School, earlier worked as a consultant with the UK government’s department of trade and industry and companies like ABN Amro, Nokia, Philips, Shell and Vodafone. Ahuja, a film-maker based in Minneapolis, US, is founder of Blood Orange Media, a marketing and strategy consultancy with expertise in innovation and emerging markets. In an interview, Ahuja, Radjou and Prabhu talk about the mindset of jugaad and its gradual acceptance by large organizations. Edited excerpts:

‘Jugaad’ has been traditionally part of the Indian work style but lately it’s being noticed globally. What made you think that it’s an idea whose time has come? 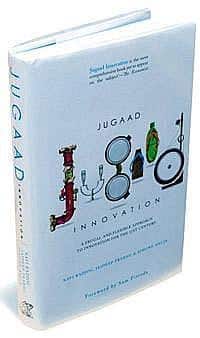 What works in one place may not work in another.

Radjou and Prabhu:In India it’s called jugaad but it’s not unique to India. Other countries have their own terms. In Brazil it’s called jetino, which means to make a way. Our initial premise was that the West is facing challenges of scarcity and unpredictability now because of, let’s say, recession. But these two factors have been a way of life in emerging markets. So to understand what’s the best response to them, you go to the emerging markets and understand that paradigm.

Apart from these two drivers of jugaad, we interestingly found a third element, which is not such a negative driver, and that’s interconnectivity. In India, people are very well-connected through mobile phones and so on and they are able to come up with solutions in a collective way. This could be a positive driver in the West, where you see a strong DIY attitude. Younger people with the tools of social media are taking control of innovation themselves rather than just in big corporations with set systems and practices in place. So we discovered that this is quite a universal response to scarcity. In this book, our aim was to try and formalize this idea of jugaad, so that someone in the West can pick it up and replicate it.

The book mentions characteristics like being able to improvise, being flexible, breaking rules and failing cheap. Profile a ‘jugaad’ innovator and what makes one.

Radjou:We really like the example of Harish Hande, founder of Selco, a company that’s essentially busted the myth that villagers cannot afford clean technology. Selco distributes solar energy to more than 200,000 rural households in southern India. For us he embodies the flexible and frugal mindset of a jugaad innovator. He bootstrapped this venture with very limited resources, improvised his way up, adapted his business model several times up to a point where he came up with the right combination, not only a price point but with the kind of partnerships he made, in giving significant value to customers at a low price point. He also embodies two other characteristics of a jugaad innovator: to keep it simple and follow your heart.

‘Jugaad’ is perceived as being a low-cost, quick-fix solution which is not sustainable.

Prabhu and Ahuja: Yes, it’s one of the criticisms that it gets. It’s seen as cutting corners or something dodgy. But there is a saying: a knife in the hands of a thief is dangerous but in the hands of a surgeon is reassuring. I think Indians push it to the wayside because when something is so inherent in our system, you easily dismiss it. Jugaad is not just a low-cost product, it’s a mindset of the people who come up with it and what large companies could learn and adapt from them.

At no point are we suggesting that you throw out the systematic approach. We’re saying that jugaad is a fantastic way to augment and complement your innovation process. Scale is the other criticism jugaad faces, that it is done only by grass-roots entrepreneurs who don’t go beyond a couple of villages. But the structured process can catalyse that scale. It’s not cast in stone that jugaad innovations are doomed to be small-scale.

That’s the challenge: How do you combine a planned, top-down approach with this spontaneous, bottom-up approach? I think that’s happening as we speak.