Kamath himself was picked early in his career for what would eventually be a larger role in the organization. He joined ICICI’s project finance division in 1971, after graduating from the Indian Institute of Management, Ahmedabad, and was spotted by S.S. Nadkarni, who would go on to become the ICICI chairman. “He taught me initial skills; he had this ability to test you by giving increasingly complex assignments. If you had any intelligence you quickly made out that he was actually testing you to see if you are fit enough to go on to the next rung," reminisces Kamath. Fourteen years later, in 1985, Kamath bonded with his second mentor, then ICICI chairman N. Vaghul, who assigned the 37-year-old to set up a strategy department for ICICI Bank. “Every day, first thing in the morning from 8.30-9.15 I would meet with Mr Vaghul, spend time discussing so many things that could be or should be done. It was such a learning experience," recalls Kamath. 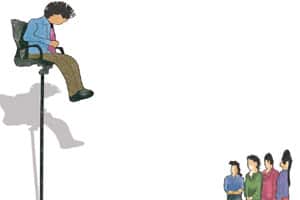 Guiding light: The onus is on the newcomer to make a connect with senior leaders. Illustration: Raajan/Mint

Formal mentorship programmes exist in many organizations. These pair a young manager or new employee with a senior manager, and set up interactions between the two, based on specific goals. These goals could be to introduce employees to the ways of the organization, to improve their performance, address their deficiencies, and for knowledge-sharing. While many of these programmes have been successful, it is really the informal connections that stand out.

Perhaps this is because formal programmes rarely begin with a personal connection. “Forced matches, often done by the HR team, are an academic exercise," says Shraman Jha, marketing director at Dutch dairy cooperative FrieslandCampina WAMCO Nigeria Plc., based in Lagos, Nigeria. Jha recalls his trainee days as a young manager at Hindustan Unilever in 2001. “Like most MTs (management trainees) I was assigned a mentor but it didn’t work. We never really warmed up beyond the formal part of it," he says.

Formal programmes structured around a series of planned interactions have varying degrees of success. “The schedules fell off, mentor-mentee meetings were postponed and there just wasn’t a connect," says Ritu Kochhar, consultant at global executive search firm Spencer Stuart in Mumbai, recalling her early days as a young manager with another financial services firm.

Though the formal mentorship programme did not work for Jha, he did find a mentor at Hindustan Unilever, this time informally, in 2002. Jha, posted in Hyderabad, was then working as area sales manager in the foods department. “I connected well with my boss at the time, Viney Singh. His work style, openness, trust in me, established a solid relationship." Four years later, when Jha wanted to move out of Hindustan Unilever to a media-related job, he turned to Singh for advice. Today Singh is based in Bangalore as managing director of Max Hypermarket India Pvt. Ltd and Jha has moved to Nigeria, but the two are still in touch.

It was the same for Ritu Kochhar, who was lucky that she connected with a senior managing director at her firm informally early in her career. This person went on to become her mentor, though informally. “Two years after my MBA from Columbia Business School, I was working with Bear Stearns (the global investment bank was bought by JPMorgan Chase in 2008), New York, in 2002. In 2004, while in the emerging markets’ equities business, I worked with that senior managing director on organizing a conference in India. We developed a bond that has endured the test of time ever since," says Kochhar. Today Kochhar has moved to Mumbai, and her mentor has moved on to become the COO of an asset management company in the US. “But we speak to each other every few months. Sometimes I call. Sometimes she may call and ask how things are with me. It is a relationship that has been of great value in my life," says Kochhar. In 2010, when Kochhar decided she wanted to switch careers and move to consulting, it was her mentor who was of great help. “Besides giving me her opinion, she also actually went out of her way to connect me to people who she thought would give me objective advice on the career change," says Kochhar.

Why have formal mentoring programmes?

If informal mentoring works so much better, why do companies insist on having formal programmes? HR experts believe that formal mentor programmes are important not just in themselves, but because they create a a culture where informal mentoring happens more easily. “It’s not either or," points out Anjali Bansal, managing partner, Spencer Stuart, Mumbai. “Formal programmes are important for an organization to create the right environment for mentorship and to create accountability for success. It helps someone who is new to the organization. If you have more motivated people on your team they will stay with the organization, so there is better retention; they will be more productive, so there is a positive impact on the bottom line, and over time they will be more effective and successful leaders because they have had a role model," says Bansal. But she agrees that the most effective mentorship relationships tend to be informal.

Given that informal mentorships are often the most effective, how can an employee make them happen? Of course, you could be lucky (or just outstanding) and get noticed by the top-most leaders. But since that is not likely to happen in most cases, it is up to a young manager to informally initiate the connect. “It is the mentee most often who initiates the relationship," says Bansal, who points out that networks like school alumni, or a common interest in leisure-time activities like philanthropy or the digital media, can be good starting points to develop a sound bonding. “It is more possible than you think. Most senior managers tend to be great people leaders and mentors. People actually want to help but they may not always have lots of time but the intention to help is there," she adds.

For a mentor too, there’s much to gain. It’s great for the organization. “Better people want to work with a company if they perceive it as having a good leader. Also, as a mentor one gets to know about what is happening in the organization at start-up levels. You may have to spend time to have these conversations but you are learning a lot about the people on your team, so it is time well spent," adds Bansal.

Mentoring itself may not be as time-consuming as it sounds. Adds Jha, “It is not about having frequent interactions on day-to-day matters. It is more about reaching out, in absolute trust and confidence, and share openly your big issues, niggling worries—whether you are fitting in well, handling your boss appropriately or picking up the necessary skills." Jha says he gets to speak to his mentor once or twice a year now. Today he himself has become an active mentor—“I enjoy the experience, and find it fulfilling."