Proud to be Asian

Proud to be Asian

If, like me, you’ve enjoyed the recent rebirth of India’s most articulate foodie as a luxury loving television show host with a sharp dose of common sense, you’re probably looking forward to Discovery Travel & Living’s new show Vir Sanghvi’s Asian Diary. After all, even diehard fans of Sanghvi can take only so many reruns of the channel’s 2007 show A Matter of Taste with Vir Sanghvi.

Of course, now that Sanghvi’s been rediscovered by satellite television, viewers no longer have to depend on Travel & Living for their weekly fix. These days Sanghvi interviews business leaders on CNBC-TV18’s Tycoons with Vir Sanghvi. He also drinks robust amounts of champagne and red wine on opulent dinner cruises and still remembers his lines on NDTV Good Life’s Custom Made for Vir Sanghvi. 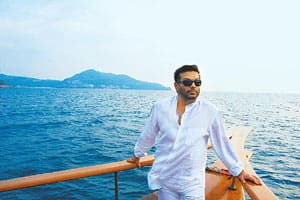 Storyteller: Presenter Vir Sanghvi savours the high life on a yacht off the coast of Thailand.

Sanghvi’s biggest strength as television host is his depth of knowledge about the good life, the ease with which he tells a rollicking story and the language he uses to tell that tale (it’s so refreshing to hear an ayurvedic therapy described as an “assertive massage") and, again, his common sense approach. When he tells you that you might as well custom-make a leather suitcase for Rs10,000 than waste your money on a designer bag, you’re sold on the idea.

It doesn’t matter what the show is about; if Sanghvi is your host, you know he’ll deliver on all the above criteria. On the new show which, alas, is only a five-part series (I hope we’re not going to be watching repeats for the next couple of years), Sanghvi travels through half a dozen Asian countries and picks themes: spa holidays, Asian beer and two parts on the region’s stunning old world hotels. The episode about the origins of biryani is set entirely in India and doesn’t really seem to fit into this series.

In each episode (I saw three of the five), Sanghvi flits between three or so countries, linking them with an articulate narrative you rarely encounter on Indian television. So in Colonial Hangover, the episode about Asian beer for instance, he moves from the launch of the Kingfisher calendar to Asia’s oldest brewery in Solan, Himachal Pradesh (where he peers into 150-year-old vats) to the Singapore beer festival (where the wine-lover presenter ends up judging the festival). He visits a brewery, meets a couple of beer-crazy experts and finishes up at a beer garden in Bangkok, a city where the golden liquid is used to quench the fire from the food rather than your thirst.

Whether he’s chatting with the man who’s been general manager at Singapore’s Raffles hotel since 1967 and who is just about to relinquish that position, or going on a nature walk around Bangalore’s Taj West End with a naturalist after a champagne breakfast, Sanghvi’s at ease in the region’s luxury hotels. He is not just welcomed but welcomed back at all the Indian hotels he visits.

You know he’s having fun as he gets a Chinese reflexology foot massage in a room overlooking the Hong Kong skyline, even though he complains it’s not easy to relax with the camera on him. One couple even allows him to watch as they get massaged a deux and then sip what looks like pomegranate juice in champagne flutes in a tub at a luxury city spa.

The show is also a sartorial revolution for Sanghvi, who usually always wears black on camera. In the three episodes I saw, I didn’t spot a single black outfit. He’s dressed in cool white trousers, a whole new range of blue, brown, purple and white linen shirts, and even a pale churidar-kurta. Yummy.