It is difficult to photograph the group together. Eight children dressed in their team jerseys jostle around a football, creating a riot of colours in their wake. A few of their mothers smile for our cameras. But they’re distracted: Their eyes are on that ball too. “Make short passes," one of them shouts in the general direction of the running mob. After about half an hour of this, when the children are cheerfully resigned to sitting on the wet grass, we get going. 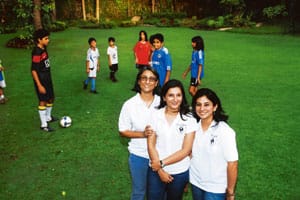 DIFL was founded in 1986 by Peggy Sood, an American who’d moved to the city with her family, and found that her son sorely missed his soccer sessions from back home. In the absence of organized football training or games, Sood decided to float a children’s football league in which the parents would coach, manage and sponsor the children.

While her idea might have been to recreate a sports environment for expatriate children, DIFL has now expanded to feed the interests of soccer-obsessed Indian schoolchildren, for whom Fifa (Fédération Internationale de Football Association), Beckham and Manchester United were words that would otherwise have remained in the realm of cable television. Football has a renewed cachet among Indian teens and pre-teens, and access to international media and football merchandise is at the root of it. According to a recently released Nielsen Global Online Survey, 47% of Indians surveyed online described themselves as “soccer fans", making India 10th in the list of soccer-fanatic countries. As an extension of this, DIFL has around 950 children on its rolls today, and another 200 on a waiting list.

Clearly, this is not backyard football. DIFL follows several international guidelines. When the league is in session— between January and March— teams play each other every Saturday on hired pitches in schools and other institutional grounds. Each team has a coach, an assistant coach and a team manager culled from the volunteer base of parents. Many more mothers have recently come into the fold because DIFL rewards volunteers with a guaranteed spot for their children—a tempting proposition, with growing numbers enrolling every year.

The rent for practice grounds and pitches, fees for hiring professional referees and the purchase of team uniforms is all funded by a Rs3,000 registration fee and team sponsors which include individuals as well as companies such as Deloitte and Bird Group. The league is rather well-endowed: Nike gives them footballs, Kinley supplies water, Fortis has ambulances stationed during every practice and league match. Warsi, who handles sponsorships, already has 90% of the sponsors for the 2011 session in place.

DIFL advertises on a few school noticeboards and through the league’s website (www.difl.org). But most of its expansion has been fuelled by word-of-mouth publicity. Over the years, the league has become more competitive. “It’s still a fun league. It’s essentially a way for parents to spend time with their children," says Kohli, a lawyer by profession. She has been associated with the league for around 10 years and is an administrative juggernaut, according to other committee members. Once, when an unexpected number of people showed up for a league match and parking threatened to become a nuisance, she donned the traffic director’s hat, drawing up parking lanes and directing cars.

Like most DIFL mothers, Kohli joined when her son, Shoaib, started playing at the age of 7. He turned 15 two years ago and outgrew the league but is still associated with DIFL as a team coach.

A few years ago, the committee started conducting skill assessments after wrapping up registrations (which happen around September, ahead of the league session). Children are rated as beginners, intermediates and advanced in order to mix them up and create balanced teams. “Everyone is invited to join DIFL. While the aim is to play serious soccer, the only thing a child needs to join the league is interest," says Malhotra, who has been the commissioner of the league for the last three years. She got involved when her son, Aaditya, started playing seven years ago. He is 14 now and plays in a team called Bahri Braves that her family-owned business sponsors.

These power-straddling women approach the organization of the league with the same professionalism they reserve for their demanding day jobs. Malhotra works five days a week at her family-owned outfit, the Bahrisons Booksellers, a Delhi landmark. She is in charge of running the day-to-day operations of its flagship store in Khan Market.

Warsi explains how she shuttles between her garment export factory and the two matches she attends on Saturdays when the league is in season. Warsi’s 11-year-old twin daughters, Alisa and Aaliya, play in one division and her 14-year-old son Omair in another. “I’ve never missed a match," she says, explaining that she starts her day with one match, drops by the factory, and steps out for the next. The matches are invariably at different venues. “That’s what a regular Saturday for me looks like when the league is in season."

The mothers draw up a roster to bring sandwiches, pizzas and fruit juice for teams. The children stay in touch after the session closes, and a parent takes them out every now and then for pizzas or a movie. The league has spawned so much photography that the committee has taken to organizing a photo contest for parents. For the last two years, winning images have been displayed at Passage Art gallery in the city.

Despite this convivial scheme of things, DIFL serves as a foundation for those who want to pursue a career in football. One of its players, 14-year-old Abhiveer Arjun, is one of the six Indian children selected to be a Fifa flag-bearer from India. Arjun will be leaving for South Africa on 19 June to watch World Cup matches. Several league players also play in their school teams.

Warsi’s son, Omair, even played for the Delhi state team in the Under-14 this year. He also plays for a club called Simla Youngs that participated in the Welsh International Super Cup two years ago. Warsi says her son is interested in playing professionally but she doesn’t think it will be feasible in India. “So I want to do everything I possibly can to give him as much soccer as he wants," she says, sounding more mother, less superwoman.

She and the other mothers are quick to point out the various benefits of participating in a competitive league such as this. “Children of more than 45 nationalities come together to take home lessons in soccer, team building and constructive competition," says Malhotra. DIFL is a melting pot, with children interacting in English, French, German, Japanese, Korean and several Indian languages. There are a fair number of girls in the league, though the numbers go down as the divisions advance.

Malhotra adds that the competitive format toughens children for challenges and teaches them to take losses in their stride. It also instils a sense of discipline—getting to the field on time, taking care of uniforms and shoes.

Manish Prasad, who calls himself a “soccer dad", is also part of the committee. He is proud that his two children are part of something like DIFL. “It’s all credit to these women," he says, motioning to Malhotra, Warsi and Kohli. For several fathers, including him, DIFL is a stress buster. “You go out there and have such a phenomenal time cheering your children."

Warsi adds that DIFL is a stress buster for her too. “But as a parent, not a committee member!"

In the midst of this, Malhotra is dealing with a Web administrator over the phone about battling a bug on the DIFL website. Being the commissioner of the league takes around an hour or two of her time every day. When the league is in season, there’s a lot more troubleshooting and groundwork to be done.

There is no tangible payback for this. “Making sure that things run smoothly, seeing the response and energy of the children…it’s a rewarding experience," says Malhotra.

It’s getting more strenuous with each year though. “When the numbers increased, it stopped being our backyard football. Now it has the appearance of something semi-professional," says Kohli, exasperated with parents’ complaints. “I want to tell those parents that this is still our backyard football in many ways. We’re just trying to put together a match for our children—it’s not our job to organize cold water at the venue and ensure that everyone has parking."

Ask them why they continue to do it, and their frowns disappear. For Warsi, DIFL facilitates invaluable bonding time with her children. She had first stepped on board as a sponsor for her son’s team in 2001, then persuaded her husband to coach the team the next year, and since 2003, has been the team’s manager.

As the children start kicking around again, you realize it’s the mothers who are the real strikers. I ask 17-year-old Shoaib if he thinks his mother is cool. “Yes," he says without hesitation. Then after a minute, he adds: “Who said girls are not into soccer?"