The Games nation is going through a phase of wanton cake-eating. Here's a classic bake

I noticed two things at home over the summer. First, the London Olympics have brought about an optimism (some would say misplaced) not seen since Tony Blair won the general election in 1997, and a level of national pride not seen since, well, let’s just say, not in my lifetime. For the first time in ages we have something to feel good about and it’s been difficult to keep the lip entirely stiff. From Danny Boyle’s Olympic opening ceremony reminder that we’re a strange little nation that does some things incredibly well, to the sight of Jessie J. standing in for Freddie Mercury, not to mention our astonishing athletes, I’ve been on the verge of tears the best part of a month. 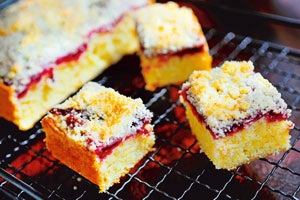 The second thing I noticed, and this too could be a sign of a country with nothing much to feel cheerful about, is a wave of wanton cake-eating. Of course, long before we realized we were capable of 29 gold medals, we knew we were champion cake-makers, but recently it seems as if every other shop is a tea room, stuffed full of people seeking brief, sugary respite from joblessness and a crumbling welfare state with a plate of scones and a tray bake.

A tray bake, of course, is good for whatever ails you, as we say in Scotland; a hugely comforting category of goodie that covers everything from chocolate brownies to millionaire’s shortbread. They are usually baked in a rectangular tin and sliced into squares; they can be chocolatey, fruity, nutty, they’re infinitely sliceable and shareable, and cheerfully appear at village fêtes, school fund-raisers and family gatherings.

And so it was that I found myself eating this particular tray bake at 4.30 in the morning on 13 August, at the end of the closing ceremony when I had to face the painful truth: No. More. Olympics. With its almond sponge base layered with gingery Himalayan plums and topped with a buttery crumble, it provided some consolation. It won’t replace Bradley Wiggins and Jessica Ennis but it might keep our chins up for a little while longer; it might just keep us going until the Paralympics.

Line a rectangular baking tray about 20x30cm. Preheat the oven to 180 degrees Celsius.

First prepare the fruit. Put the plums in a pan with the sugar and heat gently. In a bowl, mix together the syrup and cornflour, then add to the plums. Let the fruit bubble away for a few minutes until the plums are soft. Leave to cool.

For the crumble topping, rub together the flour and butter until the mixture looks like breadcrumbs, then stir in the sugar. Set aside.

For the cake, beat together the soft butter and sugar until pale and fluffy, either with a mixer or a wooden spoon. Gradually beat in the eggs along with a little flour. Stir in the flour/baking powder/ginger mixture. Lastly, add the chopped preserved ginger, almonds and milk. Mix well, then spread half of the cake mixture evenly at the bottom of the lined tin. Cover with half of the plums, then another layer of cake mixture and the rest of the plums. Finish by sprinkling with the crumble topping and splash the top with a few drops of water.

Bake for about 30-45 minutes until a skewer comes out clean and the crumble topping is nice and brown. Serve warm or cold.

Pamela Timms is a Delhi-based journalist and food writer. She blogs at Eatanddust.com.