Like Netaji Subhas Chandra Bose, the literary journal Civil Lines has for many years been thought by most to be dead, even as a few of the faithful still insist it is alive and kicking, and merely waiting for the right moment to leap back into public life. Five issues of this journal of “fine unpublished writing" (to quote the editors) came out between 1987 and 2001, each edition a celebration of the essay, memoir, long-form reportage and the short story.

The magazine’s idiosyncrasies of taste, irregularity of publication, somewhat cliquish circle of contributors and lack of either a precise editorial manifesto or a market ambition were all repeatedly explained by the editors as a symbol of their devotion to no other deity but quality. But since the last edition of Civil Lines appeared at the far end of this decade, one might interpret this hibernation as a damning comment on the state of Indian writing in English today—a kind of literary criticism of silence, just as vipassana is of the world of empty talk. 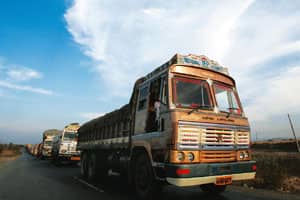 Roadie: One of the best stories in the collection, by Dilip Simeon, is about truck-driving and Naxalism. Vikas Khot / Hindustan Times

It is immediately clear from Advani’s anthology that the magazine published some outstanding non-fiction. Dilip Simeon’s O.K. TATA: Mobiloil Change and World Revolution, an essay about truck- driving and Naxalism, evokes life on the road in the most sumptuous detail while Ramachandra Guha’s An Anthropologist among the Marxists describes with giddy devotion the author’s first-hand knowledge of the various Kolkata factions of Marxism gleaned as a doctoral student in the city.

Alongside Pankaj Mishra’s Edmund Wilson in Banaras (published elsewhere), these essays must rank as two of the greatest in modern Indian prose. Indeed, Simeon’s piece deserves further praise for the acuity with which it transforms the substantially non-English world of truckers into an English that never seems incongruous. These two pieces are easily worth the price of the book, and there are other good essays: a charming memoir about animal-watching by M. Krishnan, a tribute to his father by Brijraj Singh, and a very funny “prelude to an autobiography" by Amit Chaudhuri in which the writer sets himself up against Shobhaa Dé.

Civil Lines 6, apparently to be published next year by Tranquebar Press, may be very different, but more likely it won’t; journals are usually as stable, in a broad way, as the people who run them. In that case, there will still be much about the Civil Lines to enjoy. But the opinions and literary values of the 1990s sound slightly musty when expressed today, and given how much has changed about Indian writing in this decade, the journal today might find itself a little more marginal than it would like or can be proud of.