Thanks for Visiting Mint
You seem to have an Ad Blocker on. Please turn it off in order to continue, or whitelist Mint
HOW TO TURN OFF AD BLOCKER
OR
REFRESH IF YOU ALREADY TURNED OFF THE AD BLOCKER
Home >Mint-lounge >Features >Bringing the NRI back to India

Bringing the NRI back to India

After a Michelin star for Benares and a Madrid branch, Atul Kochhar comes to Mumbai with a thrilling diaspora menu

Half-finished brick walls, a bit of flooring in place, kitchen chutes piled high, the din of carpenters sawing away in the background. None of the chaos of construction prevents chef Atul Kochhar from sharing his vision for his maiden venture in India. It’s called NRI, an acronym for Not Really Indian, and it opens in the Bandra-Kurla Complex in Mumbai next month.

“NRI is going to star dishes that Indian immigrants took with them to far corners of the British empire, adapting the recipes to locally available ingredients. Each dish has a beautiful story and I believe it’s a good time to bring them home," Kochhar says.

The mood will be a touch of colonial nostalgia and deep-rooted Indianness in a warm and casual setting with Victorian lamp posts, a chic thela (food cart), and seating that references railway stations from the 1920s. An altogether different universe from Benares, his classic Mayfair Indian fine-dining restaurant, which won a Michelin star in 2007, just four years after it opened in London.

So, why is Kochhar in Mumbai, seemingly journeying in the opposite direction? As he puts it himself: “You already have so many Indian restaurants. Why should a chef who left India to cook Indian food abroad come back to start another Indian restaurant?"

There is another angle. Kochhar is quite vocal about his disdain for “north Indian" or “south Indian". As a Punjabi boy growing up in cosmopolitan Jamshedpur, he thought unity in diversity was “normal". But when he relocated to Chennai to study hotel management and travelled across the country while working with the Oberoi group, he realized how “tribal" Indians are when it comes to cultural identity. “That sums up why we don’t have a national cuisine," he says. “It’s ironical that the moment we step out of India, we’re Indian."

But perhaps this insight was the chief ingredient in his success. Kochhar’s menu at Benares distils the essence of many parts of India into fare that refuses to be limited by region. The dish may be simply called “Monkfish with Crab Koftas", but the recipe is anything but simple. The monkfish is marinated with curry leaf, coconut, chilli, garlic and sometimes ginger and then grilled in the tandoor. The crab kofta is inspired by Goan crab cakes. A sprinkle of gunpowder (south Indian muligapodi) provides the right note of umami spice. The crab cakes are served with coconut chutney and sauces that change seasonally. Certainly a far cry from the canned chicken tikka masala that has come to symbolize “Indian" cuisine in the UK. 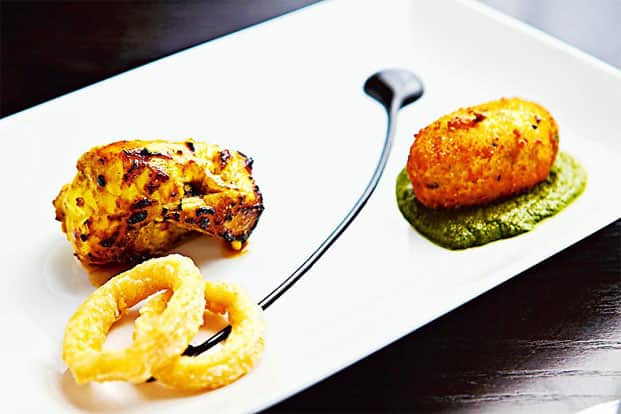 “Arriving as a young chef in London, I found that the food that passed off as Indian was largely from Bangladesh or Pakistan. People would come to Tamarind (where Kochhar worked before setting up Benares) and ask for Prawn Roganjosh or Beef Dhansak… combinations I hadn’t heard of! That’s when I recognized that there was a lot of work to be done to counter the prevalent ‘curry culture’."

He did his bit, and Tamarind won a Michelin star during his tenure as head chef. Kochhar was just 31 then and today, at 46, he has authored several books, hosted TV shows, run restaurants across the UK, Mauritius and Dubai and consulted with the P&O cruise line. It has been a long, dazzling journey but Kochhar is quite pragmatic when it comes to representing Indian cuisine in the UK. “For a British person, it’s still just about wanting monkfish caught in Cornwall and crab that’s English. Beyond that, it’s ‘whatever flavours you want to add, bring it on. I love my Indian’."

Given the runaway success of this profound-meets-prosaic philosophy in the UK, it’s no wonder that the Benares Madrid, which opened earlier this month in the Spanish capital, is causing quite a stir already.

In the next few months he will be commuting regularly between Madrid and Mumbai, we presume. “Yes, I’ll be here about 10 days a month initially and every other month after that," he says. At the moment, Kochhar is busy refining the unique menu, the first of its kind anywhere in the world. “These dishes are seen as Indian food outside India, but they are very different from actual Indian food. Think Roti Chennai (the original name for Roti Canai), Malaysian meat or fish korma, Singaporean Indian fare, Caribbean goat curry, East African Zeera Chicken or South African Bunny Chow and Bobotie."

The menu is drawn as much from his personal and professional travels across the globe as his observations on how his own family’s food changed with migration from Pakistan to various parts of India. “It’s the stories that make food fascinating... There’s the time I tasted vegetarian chilli for the first time in a Hare Rama Hare Krishna temple in Toronto. I thought that it was very Indianesque, although it was classic Canadian chili, made to the tastes of vegetarian Indians there," Kochhar recalls.

He also describes the Jackson sandwich, which has mogo (we know it as tapioca or cassava) or potato chips with a beef or lamb mince curry, a bit like a keema pao, only with turmeric and all-spice. He narrates the tale of how he found out about Caribbean Mangu Kuri, which fuses Indian spices like red chilli, cumin, ginger and salt with the locally grown island mango, slimy and sour.

What a challenge, we think, to reinterpret dishes in the Indian context, dishes that have already been interpreted intriguingly elsewhere. Will he now import the ingredients that first replaced the Indian ones to bring authenticity? “That would go completely against my strong policy about using local, seasonal and sustainable produce with a low carbon footprint," says Kochhar. So, for NRI, he’ll be working with a horticulturalist, who will help him grow his own produce.

And if that doesn’t sound exciting enough, well, coming up at the end of this year, right next to NRI, is his Latin tapas bar called Lima. We don’t want to spill the beans on that one just yet.