A 14-year-old-girl in class IX in New Delhi had her parents worried. She had a petite 5ft, 1-inch frame and weighed a whopping 74kg. She also had excessive facial hair, acne and irregular periods. She seemed uninterested in playing sports or engaging in extra-curricular activities.

Her parents took her to the doctor and medical investigations revealed that she was clinically obese, and her insulin levels were dangerously high. When the doctor probed further he found that a large portion of the girl’s diet consisted of fried foods and aerated drinks. She was barely exercising. She spent her time outside of school on the computer or in front of the TV. After a detailed investigation by an endocrinologist, dietitian and psychologist, it was decided that she needed to change her diet and get both exercise and behavioural counselling. She and her parents were counselled on the health pitfalls that awaited her if she didn’t lose weight, and on the benefits of exercise. She was encouraged to eat right and to do a minimum of 45 minutes’ exercise a day. After six months, her weight was down to 56kg and her Body Mass Index (BMI—a measure of body fat derived from a person’s weight and height) was at a healthy 23. Her insulin levels were back to normal, her facial hair, acne and period irregularity were less severe and the doctor told her everything would be back to normal as long as she maintained her weight. 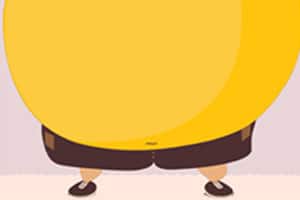 Obesity among children has become a serious medical concern in India too. A multi-centric study published in the Annals of Nutrition And Metabolism in 2011, titled The High Burden of Obesity And Abdominal Obesity in Urban Indian Schoolchildren: A Multicentric Study of 38,296 Children, estimated that in the 8-18 age group, 4.8% of the children were obese and 14.5 % of the children were overweight. The study was carried out by Anoop Misra, director, department of diabetes and metabolic diseases, Fortis hospitals,Vasant Kunj, New Delhi, his colleagues and collaborators, from August 2006 to December 2008 in schools in New Delhi, Jaipur, Agra, Allahabad and Mumbai. Based on the study results, the authors estimate that more than 15 million children in India are currently overweight and four million are obese.

The terms overweight and obese are clinically defined by BMI cut-offs based on growth curves—overweight is defined as BMIs that fall in the 85-94th percentile, and obese as those over the 95th percentile on the growth curve. In other words, a child is overweight when his BMI is more than that of 85% of the children his age and is considered obese when his BMI is more than 95% of the children his age. Dr Misra also emphasizes that “many parents and children aren’t aware of what good nutrition is and are seriously misinformed about what constitutes healthy eating". Dr Arya says that for children to lose weight, parents must be engaged, and the family supportive of the process. She finds that if the child is diagnosed with a health problem like diabetes, then motivating the parents to modify the family’s diet and to get them to support the child’s exercise routine is much easier. If, however, the child doesn’t have health problems, as happens in 60% of the cases, the family needs behavioural counselling. She tries to emphasize to these parents that “while the child is healthy for now, if certain lifestyle interventions aren’t made immediately the child is likely to suffer from health issues like insulin resistance in the future". She counsels the whole family to start regular exercise, reduce TV and computer time, and stop bringing home junk and fast food, or eating it outside.

Meena Malkani, consultant paediatrician, Jaslok Hospital and Research Centre, Mumbai, says that “often parents fall into the trap of criticizing the child and that can completely backfire. Children in their teens are very sensitive to criticism and their body image is particularly vulnerable. Educating the parents is as important as educating the child.

Entire families need to be counselled on the notion of “the healthy calorie". For example, a small candy bar and a boiled egg provide the same number of calories but the boiled egg scores a 100 on nutrition while the candy bar scores a zero.