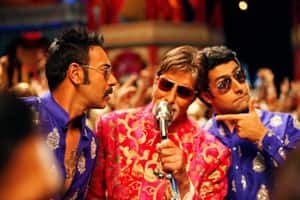 A still from the movie

But that’s not the worst part. By borrowing the basic premise from Hrishikesh Mukherjee’s 1979 classic Golmaal, and armouring it with nitwit humour, Shetty manages a really ugly tribute to Mukherjee.

Mukherjee celebrated the follies and quirks of the Indian Everyman. He is unforgettable, and enjoyable, in every age. To compare the two is, of course, silly. Bol Bachchan belongs to a class of Bollywood comedy which began with the films of David Dhawan. Lucrative at the box office, they are driven entirely by humour that uses staple laughing stocks of traditional India, like the gay man, and creates around them situations which make them pitiful and idiotic.

Bol Bachchan is one of the most distressing examples of this Dhawan school. Beginning as an ode to Amitabh Bachchan, the ageing superstar, which justifies the film’s title, Bol Bachchan has no value as a work of art. Its only value perhaps is the naked honesty of a director whose only motive for making it is its box-office prospects.

Note the outrageously regressive storyline. A young man, Abbas Ali (Abhishek Bachchan), and his sister Sania (Asin) are homeless because their inherited home is lost to acrimonious relatives. A sympathetic uncle, Shastri (Asrani), convinces them to move to his village, somewhere in north India, where Abbas can find work. The custodian of this village is Prithviraj (Ajay Devgn), who lives in a haveli with his sister (Prachi Desai). Surrounded by bumbling cronies, Prithviraj’s idiocy is revered in the village. Nobody laughs at his English, strung together by literal translations of Hindi words into English (the audience is meant to, but they largely have a mind-numbing effect instead).

Clichés pile up as the film progresses, one loud sequence after another. Like Singham, the last film Shetty directed, Bol Bachchan uses background music and sound effects with pointless abandon. A sound effect follows every English sentence uttered by Prithviraj (“My chest has expanded and I have become a blouse", and other such inanities). Funny is punctuated by sound effects over and over again. Shetty’s only visual tools are fast motion, slow motion and fast, jarring zoom-ins—not very different from the way television soaps are shot. This is film-making in a hurry. The makers are in a hurry to somehow pack in the stupid jokes and hurl them at you.

Bol Bachchan is not about laughs. At best, it’s an experiment that tests if the same stupid jokes work with us, Bollywood lovers, over and over again.

Sharman Joshi, Riya Sen and Raima Sen act the lead roles in ‘3 Bachelors’, directed by Ajay Sinha. The film is a campus comedy. Two college freshers, new to Mumbai, fall in love and their adventures invite the ire of the college establishment. The real motives behind three couples being together are revealed in the climax.

Bol Bachchan and 3 Bachelors released in theatres on Friday.