Ahead of Mahatma Gandhi's 68th death anniversary on 30 January, a glimpse of the last 10 years of his life through the lens of Kanu, his grand-nephew

No flash, no posing and no financial help—these are the three conditions Mahatma Gandhi laid down when his grand-nephew, Kanu, wanted to photograph him. Kanu agreed—and gave the world a very private account of one of history’s most public persons.

Persuaded by his father Narandas Gandhi, Kanu joined Gandhi’s personal staff at the Sevagram Ashram in Maharashtra in 1936 to supervise the clerical, correspondence and accounting functions. He was 19 at the time. He soon developed an interest in photography, given his interaction with the journalists and photographers who would frequent the ashram, Gandhi’s residence from 1936 till his death in 1948, and the nerve centre of his activities.

Kanu received no money from the ashram to fund his hobby. It was with the help of G.D. Birla, an industrialist and associate of Gandhi, that he managed to buy a camera.

“Bapu’s Hanuman", as he was fondly called, captured some of the most intimate moments of Bapu’s life “while keeping a respectful distance from him and yet conveying a sense of intimacy", says Prashant Panjiar, the project curator of Kanu’s Gandhi, a photo-book of 92 black and white images from 1938-48. The book is the third title in the Nazar Photography Monographs series brought out by the Delhi-based Nazar Foundation. 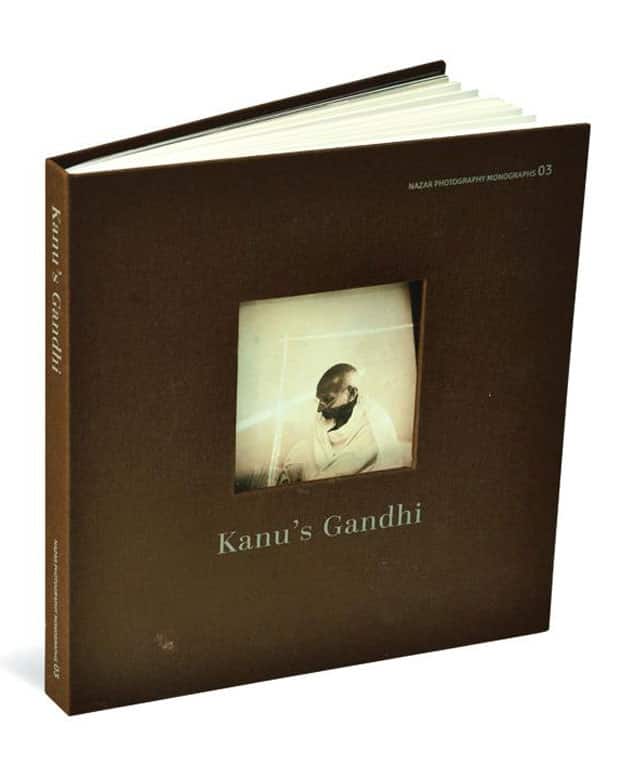 “The images depict how 10 years of Gandhi’s life unfolded through a personal lens—from his relationship with his wife, Kasturba, and associates, to his train journeys to West Bengal, Assam and southern parts of the country, and his work for the Harijans. The images have a private side despite being taken in a public space," says Panjiar.

Kanu, who died on 20 February 1986, was not a professional photographer; his unconventional use of foreground and framing of images breaks many of the accepted rules of composition. “As a result, we get to clearly see Kanu’s perception of Gandhiji and the politics of the time," says Sanjeev Saith, the book’s editor.

Saith and Panjiar sifted through more than 1,000 photographs owned by Gita Mehta, Kanu’s adopted daughter, and his wife Abha Gandhi to select the images. “Kanu’s craft at its best," says Saith.

One of the first photographs in the book is of Gandhi weaving thread on the dhanush takli, a spinning instrument he popularized as a cheaper alternative to the wheel. A 1940 image takes us to Santiniketan, showing Gandhi and Rabindranath Tagore deeply immersed in their thoughts.

Documenting Gandhi’s work for the Harijans are images of his train journey from November 1945 to January 1946, to collect funds for the community.

Kasturba happens to be the second subject of the book, says Saith. “She is the pillar. One of the images shows her washing Gandhi’s feet. Another one has her standing in the background, waiting for Bapu to eat his food; he is busy in his work. These moments are very quiet but they show how important Kasturba was in Gandhi’s life," he says.

In many ways, says Saith, Kanu’s Gandhi traces Kanu’s progression, from studying his subject to virtually becoming his aura. 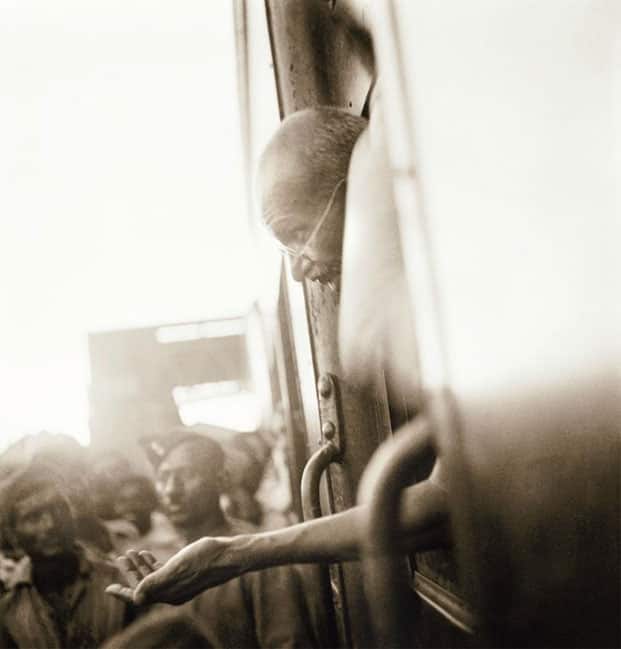 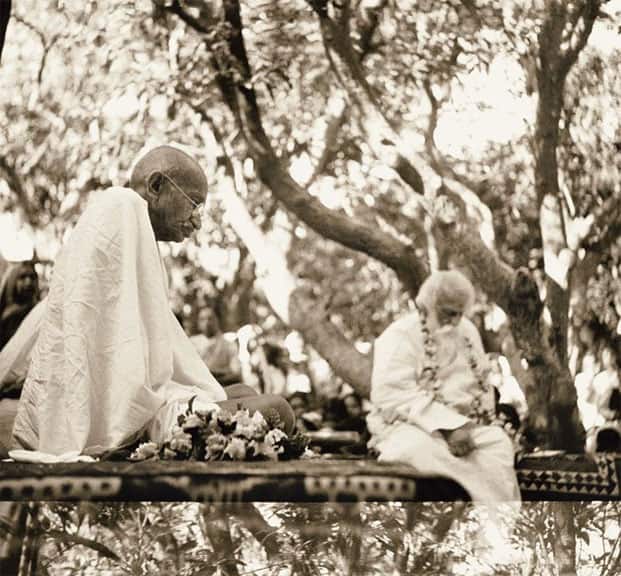 Gandhi with Rabindranath Tagore at Santiniketan (1940). 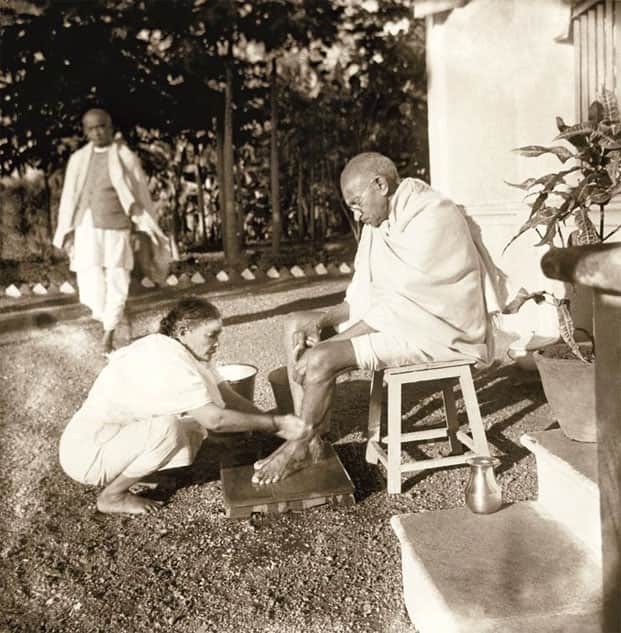 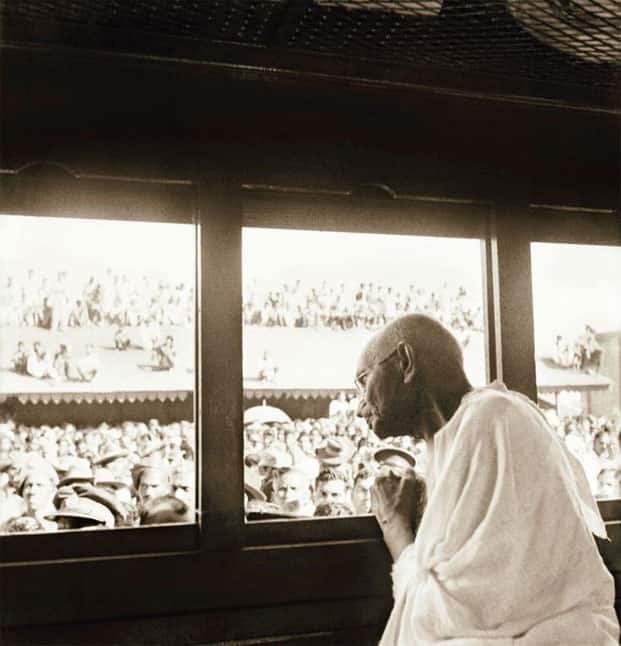 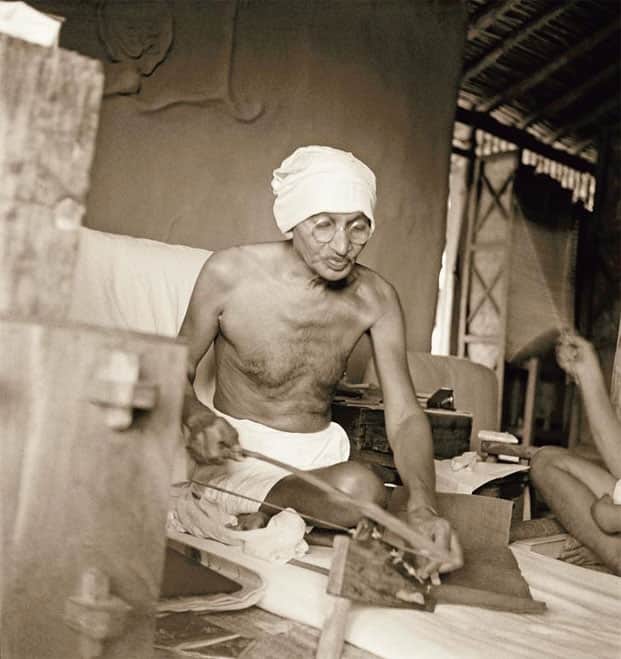 Gandhi spinning on the dhanush takli (1940). 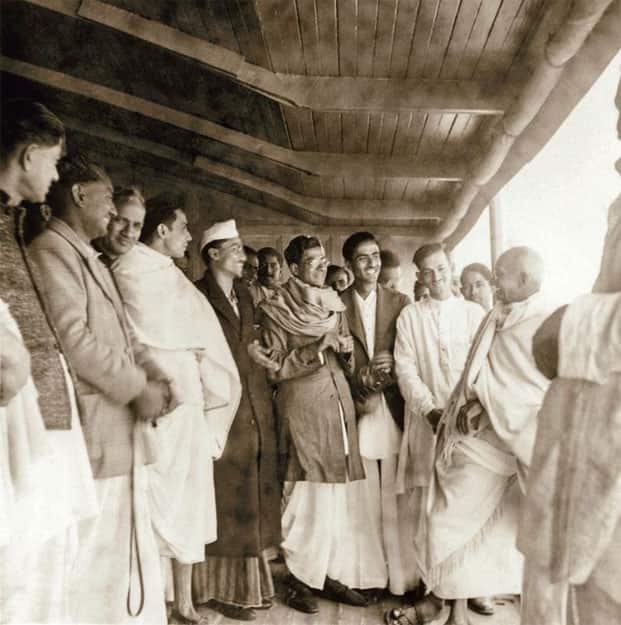 Gandhi talking to journalists on a boat (1945).

The exhibition of photographs by Kanu Gandhi is on till 12 February, 8.30am-6.30pm, at the Sabarmati Ashram in Ahmedabad.