This cocktail doesn’t have to be shaken or stirred. It has to be crushed, squeezed and mixed with your bare hands—a cocktail of brandy, Cointreau and dark rum, dried and candied fruit along with various spices. It’s November and the mixing season has begun for patissiers who are busy preparing for Christmas orders.

“Traditionally, in Europe, the mixing season begins with the harvesting season," says Vasant Khot, pastry chef, Holiday Inn, Mumbai. Khot is talking about his experience in Germany, where he worked for a few years. The Christmas cake is a mix of the rich bounty of the harvest season. Of course, the same rules don’t apply to India but as we prepare for the cake mixing in the chef’s pastry kitchen, it’s obvious that there’s no compromise on the ingredients. 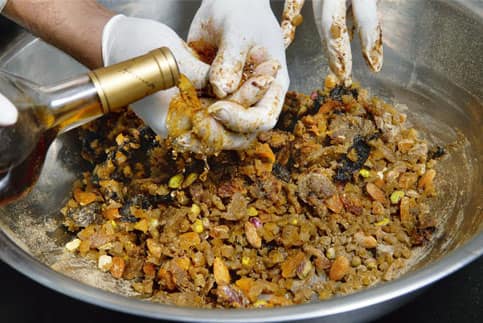 Potent: After all the fruits and spices are mixed, add brandy, Cointreau and rum and keep aside. Abhijit Bhatlekar/Mint

Almonds, pistachios, prunes and cherries, along with a mix of five spices and bottles of alcohol, are lined up on his kitchen counter. Orange and lemon peel and ginger have been candied to take away the bitterness but still retain the strong flavour. The kitchen is heady with the smell of cinnamon, cognac and candied ginger.

Mixing is usually a community affair, so the chef invites us to get our hands dirty. We pull on our rubber gloves and start putting all the ingredients in a large mixing bowl. “In Germany, there would be music and dancing during the mixing ceremony and even competitions are held," says Khot.

We start with the dry fruits, then the candied fruit, and then the spices. The ingredients get a dash of the different spirits. “Don’t worry, you can’t get drunk on this. Once the cake is placed in the oven to cook, the alcohol evaporates and just the flavour remains," Khot clarifies.

The mixture is soft and crunchy and a rich brown in colour. Traditionally, the mixture is stored in an oak box and allowed to mature for as long as a year. “People even gift each other their cake mixes," adds the chef as he opens a case of a mix that he had prepared a few weeks ago in readiness for early orders.

“The cake when baked is fragile and the texture is coarse," he says. Just before the festivities begin next month, the chef will add flour, milk and eggs to this mix that will go into an oven to become the Christmas cake.

There are smells one associates with events in our lives. As we peek into our bowl, we know that this heady mix of rum, sugar and cinnamon is the smell of Christmas.

For the fruit mix

Mix all the fruits and spices. Add 15ml each of brandy, Cointreau and rum and the vanilla beans and keep aside. Cream the butter, margarine and sugar till soft. Separately, mix the eggs and milk. To the remaining alcohol, add the egg mix. Then add the fruit mix and then fold in the flour. Put into a 9-inch tin, lined with grease-proof paper around the sides and at the bottom. Preheat the oven to 200 degrees Celsius and bake the cake for 45 minutes in a water bath soaking exactly half the cake tin.