Who’s afraid of a pothole?

Around two o’clock on Wednesday afternoon, a group of college students—all girls—congregated in the covered courtyard of the Kumudben Dwarkadas Vora Industrial Home for Blind Women in Andheri, Mumbai, where 20 visually impaired residents of the hostel and of Snehankit Helpline, a public charitable trust that works for blind persons, were waiting for them. To introduce members of each group to the other, they formed two circles and spoke to each other, asking one another about their favourite spots in the city, their favourite actors and their hobbies. And then, they were paired into groups of two, and given a map to follow. A sighted girl with a blind woman, each pair walked through the narrow roads around the Industrial Home, with vehicles parked on either side of the road, broken footpaths, garbage and drains that were covered with grills. When they returned from their walk, they were asked questions like, ‘Did you feel safe during any part of the route?’ ‘Did you experience any curious glances, rude staring or comments?’ ‘Were there any obstacles on the route?’ ‘How accessible was the route for both of you? What changes would you want implemented to make it more accessible?’

The discussion that ensued on safety, gender, sexuality and disability was eye-opening and underlined a blind spot in discussions about women’s issues—a disabled woman’s concern about accessibility in public spaces is hardly ever spoken of in conversations about sexuality, rights and gender equality; a bad road is not just a matter of civic concern. Streetlights that don’t come on isn’t simply a bane for motorists; broken footpaths aren’t simply a headache for able-bodied pedestrians. To recognize this is to understand that our cities are inimical to so many of their inhabitants. It is also the beginning of a conversation that seeks to understand diversity and most significantly, learn from it. 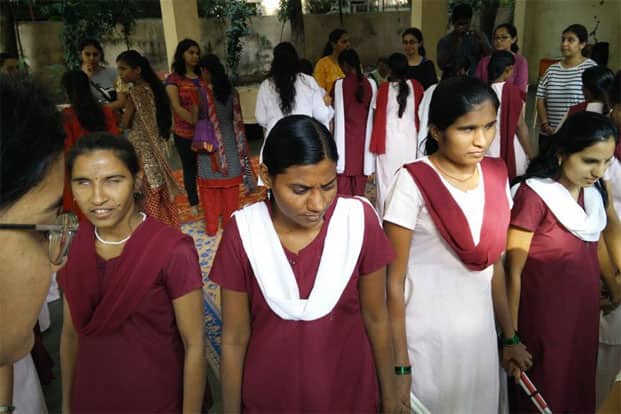 Renuka, a 21-year-old visually impaired postgraduate student of history in a Vasai college travels every day from her Andheri hostel. One of her biggest concerns when walking on the road with her cane, is of vehicles on the road. “What if they haven’t seen me," she says, while walking with her sighted partner, 18-year-old Veena from Sophia College for Women. That’s a concern both of them shared. But when it comes to crossing a road, Renuka’s safety concern takes an added dimension—she must take a fellow pedestrian’s help leaving her vulnerable to unwelcome touch by men and women. High footpaths, with drains covered by grills pose a threat to the visually impaired, but lonely, ill-lit spots on a road pose a peculiar kind of problem for Renuka. Not only does it leave her vulnerable to violence, as it would any gender that experiences sexual harassment, it also means that she has no way of exiting such a threatening space.

Nidhi Goyal, a disability and gender rights activist, and a visually impaired woman who consults with Mumbai-based not-for-profit organization Point of View, conducted this workshop with members of Safecity, an information aggregation platform that crowd-sources information on sites where gender-based abuse has occurred in cities. Wednesday’s session was part of a series of workshops that will be conducted daily till 5 December, in different parts of Mumbai. The workshops will follow the same structure, bringing together women with disabilities and women without disabilities to understand each other’s peculiar concerns, and recognize points of connection. That’s a start.

The Sex Talk is a fortnightly blog on gender, sexuality and blind spots