"storyDirectUrl"
OPEN APP
Home >Leisure >When the truth is graphic

When the truth is graphic

When the truth is graphic

For an Indian artist, a trip to Pakistan on a “reporting visa" is likely to make for interesting anecdotes. For Vishwajyoti Ghosh, the anecdotes were so bizarre that he felt compelled to chronicle them. 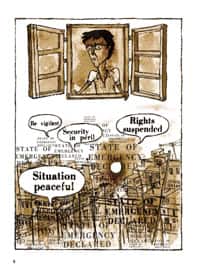 Visual stories: A page from Delhi Calm, which will be released in June.

While Lahore Reporting is a light-hearted diary of personal experiences, Ghosh has attempted more journalistic reportage in Unmasks Corruption, released in November by Ctrl.Alt.Shift, a UK-based initiative that seeks to politicize a new generation of activists using assorted multimedia projects. His six-page piece on the Indian cellphone theft cartel appears alongside other takes on corruption by British comics’ stalwarts such as Pat Mills and Bryan Talbot. This June, HarperCollins India will release his debut graphic novel Delhi Calm which, set in the mid-1970s, focuses on an important chapter in Indian political history. Sardonic strokes wrapped in dirty brown watercolours tell the story of three young activists caught in a crossfire between ideology and survival.

Like him, other Indian graphic artists are increasingly marrying graphic art with non-fiction narratives. River of Stories by Orijit Sen (Kalpavriksh, 1994) set an early precedent. Sen’s book brought alive documentary episodes from the Narmada dam controversy at a time when graphic non-fiction was still making its bones worldwide. He also illustrated the award-winning young adult graphic book Trash! (Tara, 1999), based on the real-life experiences of street children in Chennai.

Eight years later, there was Kashmir Pending (Phantomville, 2007). The second book by the publishing house floated by graphic novelists Anindya Roy and Sarnath Banerjee, it is a poignant take on Islamic militancy. But despite powerful visuals, it failed to marry text and image in keeping with the standards that had been established globally. Independent publishers are riding this wave too. The Chennai-based Blaft has joined the graphic arena with the fantasy fiction Moonward by Appupen. Kaveri Lalchand, director of the publishing house, says they’ve received several manuscript submissions of graphic non-fiction over the last few months, a few of which they are interested in pursuing.

Non-fiction narratives take a lot of research and time to produce. Since the genre doesn’t have a market cachet yet, several projects are supported by funding institutions. Two recent releases: Our Toxic World (Sage) and Tinker.Solder.Tap were funded by the NGO Toxics Link and Sarai at the Centre for the Study of Developing Societies (New Delhi), respectively. Our Toxic World, by Aniruddha Sen Gupta and Priya Kuriyan, is a guide to hazardous substances using characters of a fictional family. Tinker.Solder.Tap is a take-off on five years of research conducted at Sarai. The book, a joint effort by researcher Bhagwati Prasad and artist Amitabh Kumar, animates studies on the evolution of media technology and media piracy in India.

Kumar claims inspiration from the legendary Maltese-American comics artist Joe Sacco, who is known for meticulously documenting the areas he draws and then rendering them to the last detail. The cross-hatching style Kumar has used in the book emerged after he saw a special edition of Sacco’s Palestine.

While discussing graphic non-fiction, the boundaries between journalistic reportage and a subjective impression are important. Ghosh believes this fluidity between fact and fiction is the very charm of the graphic format. Several American and French graphic works will have notes such as: “All speeches attributed to public figures are authentic." Or they will delineate parts that are the author’s viewpoint with different design styles. Wild uses some of these tools in Kabul Disco but doesn’t feel compelled to constantly make a case for authenticity. “We should dissociate two things, the facts and the way of telling them. All the events in Kabul Disco did happen for real, but I took some freedom with the way of telling them," he says, placing his book somewhere between new-wave journalism and personal diary.

In books such as Palestine (2001) and Safe Area Goražde (2000), Sacco, the universal favourite among graphic artists, has produced extraordinary examples of what is becoming known as “graphic reportage" or “comics journalism". There are rumours that he might soon be working on a project on the Maoists in India. Sharad Sharma of World Comics India agrees. To temper this outsider-insider divide, Sharma conducts workshops to empower villagers and far-flung tribes with the skills to tell their own stories. In January, Sharma edited and released a 15-chapter anthology on development called Whose Development? in English and Vikaskalhe Vipreet Buddhi in Hindi. The stories range from a tale of a fisherman from Assam to the deleterious effects of tourism in Goa. Two other anthologies are under way and will expand their scope to include stories from Pakistan, Sri Lanka and Nepal. This idea of grass-roots comics already has currency in Scandinavia and the UK, regions from where World Comics India gets its funding.

For those who wish to attempt graphic non-fiction, there’s training at hand. Sharma is now giving the final touches to comics journalism courses for universities in Kashmir and Assam. The National Institute of Design (NID) in Ahmedabad has also started a project to encourage non-fiction graphic narratives. Sekhar Mukherjee, head of the department of animation at NID, is all set to launch a magazine on alternative comics and animation, to be published twice a year.

With educational institutions gearing up for this new wave, it appears that the surf might be coming ashore. This, despite the fact that graphic novels are a minuscule part of the Indian publishing market. And while the works don’t spell magic or leave scars, the lines are definitely getting bolder.