It’s no great surprise that one of Scotland’s best-loved poems is Address to the Toothache by our national bard, Robert Burns. With a fondness for deep-fried Mars bars, shortbread and boiled sweets, Scots have every reason to fear what Burns calls the “hello’ a’ diseases". One of the main reasons Scotland is a place where teeth decay and dentists thrive must surely be our national sweet, “tablet". The best way to describe tablet is like barfi, but sweeter.

Which is presumably why my mother only ever made tablet at Christmas. We kids would hover round the pan while she patiently stirred up the sweet, creamy, buttery, fudgy mass, waiting for all the precious scrapings left behind after she’d poured it into a tin to set. She would then hide it and ration it out one piece at a time, leaving us constantly craving more. 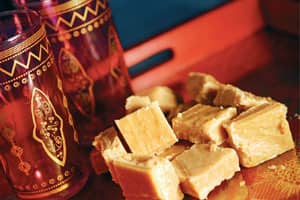 Sugar rush: In shape and consistency, the tablet is close to the Indian barfi. Pradeep Gaur/Mint

Unfortunately, the recipe I’m passing on today is not my mother’s even though hers was the best I’ve ever tasted. The recipe my sister and I inherited is incomplete and has led, over the years, to much festive frustration as we try to recreate mum’s tablet for our own children. In fact, our annual struggle to coax the tablet to setting point has become something of a Christmas ritual in itself.

compendium which was always tucked in our Christmas stocking. The Broons are a fictional Scottish family whose antics have been captured in a cartoon strip in The Sunday Post newspaper since 1936.

To this day, Maw and Paw Broon continue to live with their eight children in a tenement building in the fictional Scottish town of Auchentogle where, despite acquiring computers and iPods over the years, they seem to remain firmly rooted in the 1940s. They have old-fashioned names like Horace, Eck and Hen, wear aprons and zoot suits and are constantly trying to scrape together enough money to buy a tin of “baccy" (tobacco). They speak in a broad Scots dialect and, judging by the hairstyles, Maw, Maggie and Daphne still set their hair in pin curls at bedtime. Recently, the stout-chested Broon matriarch has been persuaded to record her recipes for posterity in a series of wonderfully compiled, scrapbook-style books. With all the Scottish favourites—Clootie Dumpling,

Cock-a-Leekie, Arbroath Smokies—it takes me back to the cooking of my grandparents and aged aunties.

Here, loosely translated from the Scots, is Maw Broon’s recipe for tablet and, unlike my own Maw’s recipe, this one actually works.

(makes enough to keep your dentist busy for quite some time)

Grease a baking tray approximately 25x35cm. Melt the butter in a large heavy-bottomed pan over low heat. Add the sugar and milk, and keep stirring until the sugar has completely dissolved. Pour in the condensed milk, turn the heat up “a wee bitty" then bring to the boil “awfy slowly". When the mixture has reached boiling point (and from now on take great care, boiling sugar equals nasty burns), turn the heat down and let it simmer for 20 minutes. Stir occasionally to make sure it doesn’t catch on the bottom of the pan. After about 20 minutes, put some cold water in a cup and with a small spoon, drop a tiny amount of the mixture into the water. When the tablet is ready, you should be able to hold the mixture between thumb and forefinger—it should be like a small, soft ball. If not, keep boiling the mixture until it reaches the right consistency.

Then take the pan off the heat and stir in the vanilla extract. You now need what Maw Broon calls “a guid strong arm" as you have to beat the tablet solidly for 5 minutes. As it cools, the mixture will become thicker and harder to beat but keep going for the full 10 minutes before pouring it into the greased tray.

Score the surface of the tablet into one-inch squares—this will make it easier to cut later.

Pamela Timms is a Delhi-based journalist and food writer. She blogs athttp://eatanddust.wordpress.com