Platform exclusives such as Resistance 3 generate a lot of hype, but the PlayStation 3 is still searching for a shooter to call its own. While the Xbox line-up has Halo and Gears of War as exclusives that garner both praise and sales, neither Resistance nor Killzone were able to have the same impact.

This is a pity because with Resistance in particular, developers Insomniac Games brought a lot of the crazy and over-the-top design of their other most famous work—the Ratchetand Clank series.

Resistance: Fall of Man was a well made game that got many things right—particularly in designing the weapons for the game. There were 12 very different weapons to tote, and Resistance made the most of them all.

The sequel dropped the weapon wheel and tried instead to take cues from more successful releases of the time, such as Halo and Call of Duty, but that didn’t work out too well. In many ways, Resistance 3 is the game Resistance 2 should have been. The problem is that it isn’t the game that it should be. 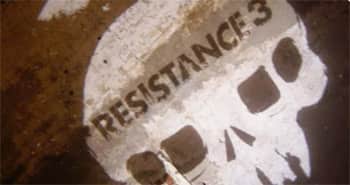 This, coupled with the decision to bring back health packs instead of automatically regenerating health, is mind boggling because that’s a design decision we walked away from in the late 1990s. Retro is in, but this is carrying things too far.

Wooden and uninspired characters leave the game feeling pointless and a chore at worst. But there are saving graces—Resistance 3 has brought back the weapon wheel from the original game, and you are always carrying around 12 very enjoyable weapons. Favourites include guns that shoot machine guns and guns that throw small black holes in the enemies’ path. With other guns you can shoot through walls or “mutate" enemies into berserk monsters hell bent on killing their own kind.

Through much of the game, there’s a lot of fun to be had, and on occasion the gameplay truly shines. Sadly, overall, the game isn’t able to reach the same level. There are a lot of good things about the game, but it’s supposed to be the standard bearer (along with Killzone 3) of what a shooter can do on the PlayStation. That’s a very lofty target, and Resistance 3 falls short. Many of the early missions in particular suffer from terrible pacing. The characters are wooden, and the enemies cheat, while invisible walls and mindless waves of enemies ruin good arenas.

Fans of the series should definitely pick this one up because it is a good game, but others should think twice because it’s not a great game.

Resistance 3 released in India on 13 September.