Mansingh Rana first met Jawaharlal Nehru in the university town of Madison in faraway Wisconsin in the US. How that meeting came about is an interesting tale in itself.

When he was a fourth-year student of architecture at the Sir JJ School of Art in Mumbai, Rana read Frank Lloyd Wright’s autobiography and was much impressed. He wrote to the great architect in America, expressing admiration for his “organic" approach to the discipline, while lamenting his own “mis-education". Much to his surprise, Wright wrote back, though Rana almost didn’t get the letter. 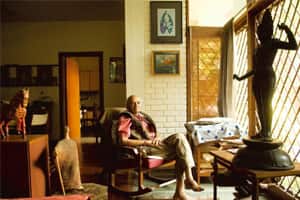 The year was 1942, the peak of the agitation for freedom from British rule. In the wake of Gandhiji’s Quit India call, a general strike was being observed and government offices, including the post office, were shut. It was Rana’s good fortune that a fellow student was an avid stamp collector and went to the post office looking for easy pickings of foreign stamps and, improbably, among the huge piles of letters lying in the empty post office building, stumbled upon Wright’s letter to Rana.

Wright’s one-line response was to the point: “If you can come on your own steam, we will put you to work." It was only in 1947, when he received a scholarship from the maharaja of Porbunder, his native place, that Rana set sail for the US.

While Rana began his apprenticeship in what he describes as Wright’s “ashram", the British finally quit India. And in 1949, prime minister Jawaharlal Nehru made his first trip to the US. There, he gave a talk at the University of Wisconsin in Madison and Rana, along with Wright’s wife and daughter, was in the audience. Later, they all went to meet Nehru, who was there with Indira Gandhi. Olgivana, Wright’s wife, told Nehru that her husband had read and admired his book, Glimpses of World History.

Rana then introduced himself. “Padhai khatam kar ke aa rahe ho na? (You are returning after your studies, aren’t you?)," Nehru asked him. A surprised Rana replied in the affirmative. “Aao to milna (meet me when you come)," said Nehru. Rana trained and worked with Wright on various projects, including the design of the Guggenheim Museum in New York, before he headed back to Mumbai in 1951. He didn’t like it much there, and moved to Delhi, where he began teaching architecture at the Delhi Polytechnic at Kashmere Gate. A year later, on a friend’s prompting, he wrote to the prime minister. Nehru’s personal assistant replied, telling Rana about the prime minister’s daily morning meetings with visitors at his Teen Murti residence.

Nehru immediately recognized him, “Aa gaye tum? (You are back?)," he said. Rana told him he was teaching. “Very good," replied Nehru. “We must put you to work."

Soon he got a call from a joint secretary in the Central Public Works Department (CPWD) and Rana’s career as one of the pioneering architects of independent India began—designing freedom fighter Asaf Ali’s tomb in Delhi’s Nizamuddin cemetery was his first assignment. Between then and 1964, the year Nehru died, Rana worked on a number of important projects, which included the first Bal Bhavan building in New Delhi and the first India pavilion at the New York World’s Fair of 1964.

One project was especially close to Nehru’s heart, though—the design of the modest-sized house that Nehru wanted built for himself on the Teen Murti premises. The prime minister often tired of his grand residence, with all its hustle and bustle, and longed for some privacy. On one occasion he complained to Rana how he would go to his bedroom for a post-lunch nap, only to find CPWD men milling about repairing a light fixture or something. “I ask them why they have to do this during my nap time!" Nehru said.

“He would discuss little details of the house with me," recalls Rana. “The tables, bookshelves, light fixtures, windows." But it was all for nothing. Opposition figures such as Syama Prasad Mookerjea questioned the need for the house in Parliament. “Rana, yeh to khatai main pad gaya (Rana, this whole thing has soured)," Nehru said to him one day. And there the matter ended.

Nehru’s wit and sense of humour was legendary. When he went to review the construction of the newly designed Vigyan Bhawan, to everybody’s dismay the makeshift elevator, with Nehru in it, got stuck for a good while. When the ordeal ended, Nehru turned to the nervous chief engineer who was with him in the lift and said: “Mr Rijhwani, let me suggest something to you. Put a shelf in the lift with some books in them. When someone gets stuck, he’ll have something to read."

The 2,500th anniversary of the Buddha’s enlightenment was in 1957 and Nehru wanted to commemorate the occasion with a suitable memorial. A committee headed by then vice-president S. Radhakrishnan was appointed and a competition for the memorial announced. Artists and architects from the world over submitted designs, none of which enthused the committee members. Rana suggested that a garden or a park might be more apt, and the idea appealed to everyone.

Though not a landscape architect himself, Rana worked out a plan for the park. Shivram Murthy, the first director of the National Museum, told him that in his last sermon, the Buddha had preached, “Anything that you do has to respond to nature." Rana bore this in mind when he designed the Buddha Jayanti Park in the southern part of the Delhi Ridge.

In 1964, while attending the Bhubaneswar session of the Congress party, Nehru suffered a stroke. Some days later, ailing, he flew back to Delhi and—as Indira Gandhi later told Rana—said he wanted to make a detour on the drive to Teen Murti from the airport.

“There is a viewing terrace at the Buddha Jayanti Park entrance," recalls Rana. “Back then you got an uninterrupted view of the city from there—you could see the minarets of the Jama Masjid on one side and the Qutub Minar on the other." Nehru made his entourage stop at the park, walked up to the viewing terrace and, after a brief while, left. “Rana ko batana ki main Buddha Jayanti Park gaya tha (tell Rana I visited Buddha Jayanti Park)," he instructed Indira. “Tell him I saw a lot of children playing there and I was very happy." He died some months later.