Here’s a provisional definition: A short story is a story you can tell in one sitting, perhaps in the time it takes to feed a circle of hungry children as they sit with hands held out for the next spoonful of food, and where food and story come to a simultaneous and satisfying end.

This oral quality, this sense that the story could change unexpectedly depending on the mood of the audience, could—and does—break into song or take diversions via social history, is the most striking thing about Gogu Shyamala’s first collection of short stories, Father May Be An Elephant And Mother Only A Small Basket, But... 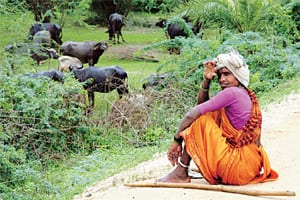 Close to reality: A woman in Nalgonda, in rural Andhra Pradesh, the setting of Shyamala’s stories. Shreyans Bhansali

Shyamala’s village is a site of many contradictions: the Mala, Madiga and Sabbanda communities have a close relationship with the land and its seasonal rhythms; their oral histories and identities are inseparable from the landscape and its stories. Yet it is impossible to escape the consequences of caste unless the village is left behind.

In Raw Wound, clearly the most autobiographical and powerful story in the collection, Syamamma is sent away to school in order to save her from becoming a “jogini" (a lower-caste woman who is declared the sexual property of the whole village). Her father leaves her at a school, and pleads with the warden of the hostel to keep his daughter safe. “This was the first time I had seen my father weep uncontrollably and I felt the village’s lake flooding with sorrow. I held fast to my father and could not help but cry myself," Syamamma says.

Shyamala’s language is straightforward yet lyrical—the village lake flooding with sorrow elevates individual suffering into the entire community’s suffering. In another story, The Village Tank’s Lament, the tank itself speaks to a child. There are tonal shifts and changes in perspective that make each story a fresh experience: In one, a couple of visitors to the village watch some boys dive and swim in a village well; it’s an instance of straight reportage told as story. This is an interesting tactic because when stories end well—such as Braveheart Badeyya or Tataki Wins Again—the reader is forced to question her expectation of violence in fiction and ask what it means that the author refuses time and again to offer it. That Shyamala avoids a bleakness of tone while leaving alive the possibilities of violence is a tribute to her mastery over the short story form. Indeed, Shyamala’s greatest achievement is the note of humour and lightness that sounds through this collection.

If there is a striking absence in this book, it is that of the Communist movement in the Telangana region. The stories touch upon many of Shyamala’s own concerns, after all: land, agriculture, Dalit politics, feminism and oral history. It seems impossible that the Naxal movement, which has a long history in the region, should find absolutely no mention in these stories. After Shyamala’s own early involvement with the movement, and her subsequent departure from the political positions the Maoists hold, I read this absence as an act of power by a Madiga who, by such a deliberate erasure, reverses the classical Indian Communist’s blindness to caste.

When I began reading, I was struck by the title’s resemblance to Yasujiro Ozu’s film, I Was Born But... It occurs to me that this book shares other qualities with that particular film: a respect for the perspective of children as they negotiate the adult world, the ability to create their unique world without descending into nostalgia for one’s own childhood, and the hard-won lightness of an adult who has known bitterness and loss.