As in the best of food memoirs, Monica Bhide's 'A Life of Spice' takes you by the hand and introduces you to a new family

Cooking a bisi bele baath this morning, hours after finishing Monica Bhide’s A Life of Spice, I thought I could see her frowning disapprovingly as I dipped in a spoon and brought it to my mouth to check the salt. Tasting food while it was being cooked was verboten for engineer-turned-cookbook author Bhide as she was growing up in her mum’s kitchen in Bahrain and it continued to be an unconscious taboo even when she moved to the US as a graduate student. Instead, she honed other senses—her eyes, ears and especially her nose—to gauge the doneness of her cooking: A Life of Spice refers repeatedly to the mushy marriage of onions and tomatoes, the sizzle of cumin, the aromas coaxed out of cinnamon by hot oil.

Bhide’s principal weapon against any hostility is an utterly disarming style of writing. She does not try to dress up the memoirs—a collection of 30-odd essays, interspersed with short sections on her favourite spices, beautifully photographed by Simi Jois—as anything but her personal memories; there is no didacticism or patronage or the subtle sense of superiority so common today in memoirists (and their country cousins, bloggers). Besides, there is no effort to gloss over setbacks, either in the kitchen or elsewhere in life.

Most importantly, however, Bhide possesses the breadth of experience and interest that allows her to lift her kitchen concerns beyond the immediate and the mundane. In ‘The Ghosts of Cakes Past’, one of my favourite essays in the anthology (included in Best Food Writing 2014, edited by Holly Hughes), Bhide takes the simple act of baking a cake—self-confessedly not one of her talents—and turns it into a metaphor for the process of taking a difficult decision to end a relationship. In ‘Why I Don’t Cook for My Parents’, Bhide taps into our rarely articulated need to seek security, predictability and comfort in the food we grew up on, and all the rituals that surround this twice-daily affair. 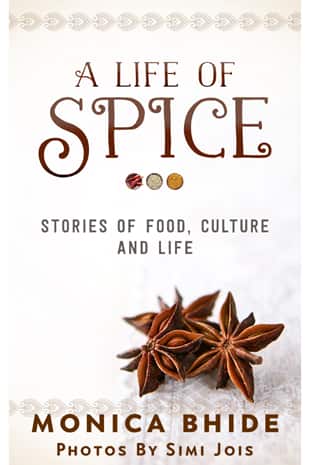 A Life of Spice by Monica Bhide and Simi Jois; available as an e-book on Amazon.in for ₹ 248.66.

This weekly series, which appears on Tuesdays, looks at what’s new with food and drink, and how we are interacting with it.