How the Nike brand was born

Company co-founder Phil Knight talks about his love of sport, the motivation for manufacturing running shoes, and the way he dealt with the death of his elder son

Phil Knight always wanted to be a professional athlete. At the University of Oregon, US, he was a gangly middle-distance runner, but realized that fate had made him good, not great, at competing professionally.

At the Stanford Graduate School of Business in 1962, he signed up for a class on entrepreneurship and wrote a research paper on selling running shoes. He spoke about the kind of shoes made in Japan, running shoes that would challenge the supremacy of the German giants in the market—adidas and Puma. The research paper and the business plan became an obsession with Knight, who could have had his pick of accounting jobs. Instead, he borrowed capital—from his father, friends and bankers—and started Nike to sell running shoes.

In the 1960s, selling shoes was infra dig, especially if you had done a master’s in business administration from Stanford. The company was always short of money, Japanese shoe suppliers often went incommunicado and reneged on deliveries, and in 1977, American competitors like Converse and Keds leaned on the US government to sue Nike for millions of dollars in notional back taxes. But sales were good, and the shoes flew off the shelves.

Nike has a wonderful business story. Many people have written about the company before, notably Kenny Moore in Bowerman And The Men Of Oregon and J.B. Strasser in Swoosh: The Unauthorized Story Of Nike And The Men Who Played There. But Shoe Dog: A Memoir By The Creator of Nike is different. It is the first time that the normally reticent Knight has spoken, and related his story.

Shoe Dog gets its name from a phrase in the shoe trade for men and women who toil so hard that they think and talk about nothing else. The book is packed with interesting titbits of information, from the design of the swoosh logo to the early ad campaigns. 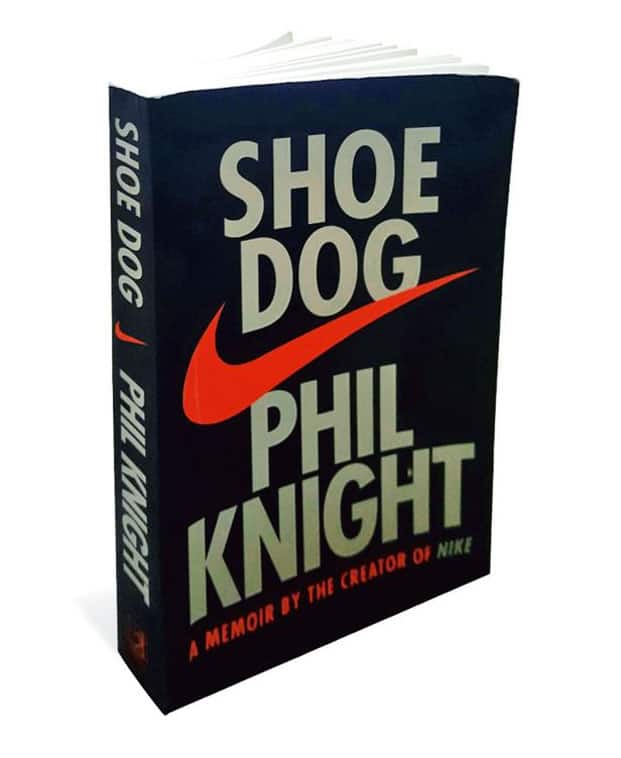 The result is a book that is well-written, packed with visual moments and hard to put down. There’s Knight as he laces up his green running shoes and goes running for miles on the trails in Oregon, in 1962; there’s Knight on a plane to Tokyo, Japan, in 1964, toting a small suitcase and How To Do Business With The Japanese, a book he learnt by heart on the long journey; there’s Knight working part time with Pricewaterhouse in 1965 to finance his family and his business, on the road studying accounts all day, and drinking alcohol with his team most of the night.

Nike wasn’t always called Nike. In the early days, when it sold the Tiger brand of Japanese shoes, it was called Blue Ribbon. When Knight invested in his own factory, he had to choose a name for his own brand. The two options were Falcon and Dimension Six. Knight liked Dimension Six, though his employees hated it. Finally, Jeff Johnson (the very first employee at Blue Ribbon) came up with the name Nike, a name that he says came to him in a dream. That’s how Knight named his brand Nike, after the Greek goddess of victory.

Shoe Dog is a memoir, but it is also a tribute to the team that built Nike. Knight talks about his erstwhile track coach and “partner", the late Bill Bowerman, a co-founder of Nike. He says: “It was Bowerman who made me think, really think about what people put on their feet.... He was obsessed with how human beings are shod.... In the four years I had run for him at Oregon, Bowerman was constantly sneaking into our lockers and stealing our footwear. He’d spend days tearing them apart, stitching them back up, then hand them back with some minor modification, which made us either run like deer or bleed."

He also talks about the athletes who wore Nike, especially sporting legends like Agassi, Michael Jordan and Tiger Woods.

Knight, who grew up in a middle-class household in Oregon, describes his father as “a conventional Episcopalian, a believer in Jesus Christ". It was his father who funded Knight’s first purchase of Tiger shoes from Japan, lending him $1,000 (around ₹ 67,000 now) for the first consignment of 300 pairs.

He also talks about his wife, and of his two sons, Matthew and Curtis. Knight confesses that he was so obsessed with Nike that he now feels he didn’t spend enough time with his family. His elder son, Matthew, died in a scuba-diving accident in El Salvador in 2004, at the age of 34. Knight remembers leaving office, giving up his post of CEO and returning only six months later. Speaking in the book about this tragic phase, he says: “Every Nike athlete wrote, emailed, phoned. Every single one. But the first one to call was Tiger (Woods). His call came in at 7.30am. I will never, ever forget. And I will not stand for a bad word spoken about Tiger in my presence."

The book talks briefly about the controversy of shoe manufacturing in sweatshops in Asia. Knight feels a sense of betrayal, at being singled out and vilified, because the Nike brand name generated publicity. It was hard, he says, to see his effigy being burnt outside the flagship Nike retail store in Oregon. Still, the company tried to take the criticism on board and improve conditions in overseas factories.

For the most part, however, the book is the story of a lifelong love affair—with sports and with the creation of a brand.