Six novels in which rains had a part to play

Be it Emily Bront or Gabriel Garca Mrquez, the rains have metaphorical significance in all these novels Named by The New Yorker for situating “the single greatest instance of psycho-meteorology in Western literature", the lead lovers of Brontë’s Gothic classic brave the wild weather of the Yorkshire moors, and of the mind and heart. This 19th century novel, featuring the famous Catherine and Heathcliff, is drenched with furious storms, fatalistic love and phantoms. South of the Border, West of the Sun by Haruki Murakami

South of the Border, West of the Sun

Set in post-war suburban Tokyo, this surreal novella takes readers through the life of Hajime and his childhood sweetheart Shimamoto. Their friendship fell apart at age 12, but Shimamoto reappears in his nightclub on a rainy night two decades later—all her appearances in the novel are associated with rain—and the story ends with the now married man pondering the rain, past, present and future. One Hundred Years of Solitude by Gabriel García Márquez

One Hundred Years of Solitude

In what is believed to be the Colombian writer’s magnum opus, seven generations of the Buendiá family are storied—from when they found the fictional island-town of Macondo, based on Marquez’s hometown Aracataca, to when a windstorm wipes its existence clean. Beginning from the night of the massacre, based on the real-life Banana massacre of 1928, it rains and floods for “four years, eleven months, and two days" in an act of magical realism true to Márquez style.

This 2002 Man Booker Prize-winning fiction—and its Academy Award-winning adaptation—is a story of shipwreck and survival, one where the Puducherry-born protagonist “Pi" Patel floats on the Pacific Ocean with a Bengal tiger over the course of 227 days. Martel repeatedly uses rain as a metaphor as religious allegory to depict the ebbs and flows of being stranded at sea—such as when Richard Parker is drenched in the rain, or when fish fall like raindrops from the sky and save the starving duo. After Me Comes the Flood by Sarah Perry

After Me Comes the Flood

The haunting debut of this English writer, whose second novel was on several literary prizes’ longlists this year, is distilled through a hot drought in Norfolk. John stumbles upon an isolated house and its six strange inhabitants, who, as it turns out, are expecting him. Rest assured, the reservoir of dark water situated near the house is an omen of sorts; but “the biblical rain that eventually falls", notes The Guardian, “is both a natural phenomenon made eerily strange, and an indistinctly allegorical event". 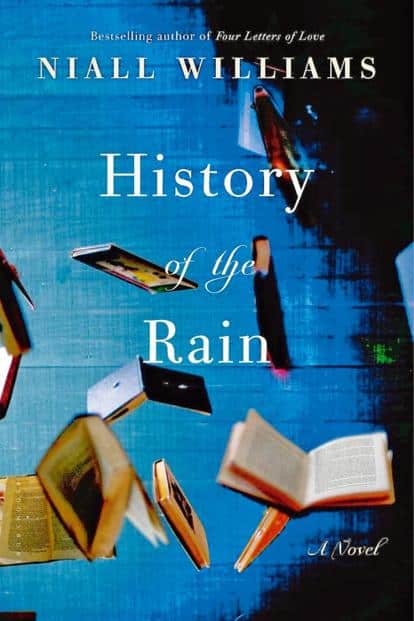 History of the Rain by Niall Williams

History of the Rain

History Of The Rain is part bildungsroman, part family saga and part the story of Ireland itself. It is also the “rain-sodden history of fourteen acres of the worst farming land in Ireland". Teenager Ruth Swain lives a sequestered life in the tiny Irish parish of Faha, on the banks of the Shannon river. She spends all her time tracing her complex family tree through poetry and piles of books in her extensive library. Ruth says that this is a place where it has poured for “800 years" and it is only fitting that rain is literally personified as a character in the novel.