Iread about Childline in a newspaper called The Metropolis on Saturday in 1996. I thought it was a good idea: street children attending to a helpline for children in distress. I called the number, wrote a cheque and forgot about it.

But a week later, three social workers came looking for me. That was the whole Childline team then: Jeroo Billimoria, who had invented it; Prakash Fernandes, who drew the charts and did the writing; and Meghna Sawant, who did everything else.

Also Read: Give and take

“We need your help," she said.

“We are thinking about a training manual. You could edit that for us," Billimoria said.

That was more like it. Editing I could do. That was something I had done for years. 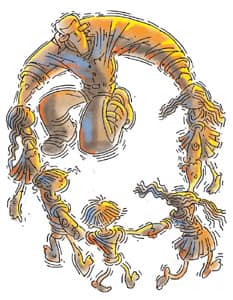 To many this may sound like not calling a spade a spade. I don’t think so. It’s about caring enough to make sure you try and do what is needed, not ride in to reform everyone and show them how things should be done. Too often, volunteers assume that they bring sound common sense to the development sector. They do, but every volunteer would do well to remember that those who are professionally involved in development work have studied several models, tried various methods, and are standing on the shoulders of the giants of their field.

I learnt this in one long and insight-packed night. After several weeks of email exchanges, Billimoria rang me up and suggested that we meet in the Childline office for half an hour so she could orient me to the needs of editing a manual in the development sector.

At around 7pm, we sat down at a computer, I cracked my knuckles, she ordered tea and we began work. At 2am, the watchman of the building came in to complain. Billimoria emailed the file to herself and we went off in search of one of her friends who had a computer at home. At 3am, we were ensconced in front of a computer of some bemused friend who had opened her door, asked if we wanted some coffee, and then gone back to sleep without giving us any. At 5am, it was done and I had learnt that if you want to help, you have to relearn several things.

Over the course of the next five years, I edited eight or nine manuals for Childline. I did their reports, edited their proposals and then the inevitable happened. Childline became a government project. It had funds. It was in 50 cities. It was big and it would survive.

I liked the idea. Meljol was a small struggling organization at the time. It had no funds though it was doing pioneering work in child rights. By the way, the term “child rights" does not mean children going on strike for their rights; it only means that children have the right to survival, to development, to protection and participation. In the face of every child labourer, in the body of every child sex worker, you can see a violation of the basic rights of the child. Meljol works with children in the school system, with teachers in schools, to strengthen the notion that children have rights.

For some years, I worked with Meljol, doing precisely what I had done with Childline.

And then one day, Billimoria blew into town again. We drove to a school in which the students greeted Sumitra Ashtikar, our executive director, with the kind of approval reserved for film stars. They roared the Meljol song and danced the Meljol dance, Sumitra leading with panache, and they almost made me cry. Then suddenly, Billimoria asked whether anyone had a bank account.

She asked who had been inside a bank.

A very few had.

She asked how many children had parents who had bank accounts.

On the way back, during the long drive from the outskirts of Panvel to the office of Meljol, located in a municipal school in Bombay Central, she outlined her plan.

“A bank for children, no, we’ll call it a child savings scheme, the word bank brings all kinds of problems with it. And we have to have a passbook. And maybe a bank day, on which deposits are made, and withdrawals. No, they can’t just withdraw. They have to say why. It should be written in the book, put in another column, there. No, we should use the Meljol clubs for this. It should be one of their activities. Where should the money be kept? With the teacher. Later we can have them open accounts in the banks. Or the post offices. Even where there are no banks, there are post offices. We need to talk to the post offices…"

And so it went.

By the time we were back in the city, Sumitra and I were exhausted but we knew that we had another project to start. Neither of us was sure it would work.

But today hundreds of thousands of children are learning the concept of savings, not just in rural Maharashtra but in 20 countries all over the world. Meljol’s concept lives and breathes in Egypt and Vietnam, in Brazil and Kenya, in Argentina and Serbia and is teaching children to take charge of their lives and their futures.

I know my role was small but it was one which gave me immense satisfaction of the kind you could experience tomorrow. You could be a lawyer or a doctor or a teacher or a homemaker. Your skills are needed. They can, with a little rejigging, be put to use.

The social development sector needs corporate help more than ever before. It needs help with setting up systems, writing financial plans, corporate planning, things that will establish institutional longevity. As the global slowdown begins, it will have to turn self-sufficient.

You can help. All you have to do is ask.

Jerry Pinto still works pro bono with Meljol as executive secretary to the board of directors. More information can be found on www.childlineindia.org.in and www.meljol.net